Newsweek Survey: Approx. 50% of Americans Use Phones While Driving Kids 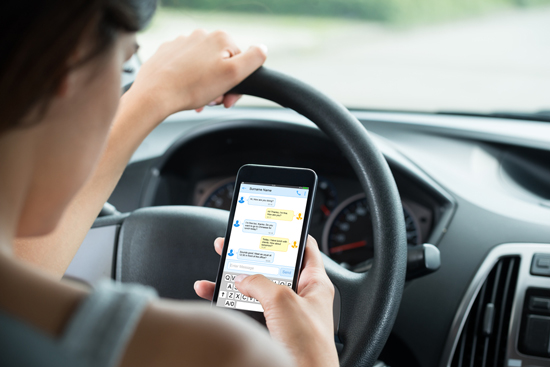 If you’re over 40, you probably remember “Baby on Board” signs. They seemed to be everywhere. Parents, grandparents, and other caretakers put them on their vehicles because they wanted other drivers to know that they were carrying precious cargo. It may have had to do with the increasing influence of the association Mothers Against Drunk Driving (MADD).

Amy Grant’s song “Baby, Baby” was very popular then, too. She wrote it about her daughter who joined her on stage when she sang it at the 1991 Grammy’s.
Those signs went out of fashion many years ago. Protecting children, of course, never did. Ironically, though, many Americans use their phones and other devices when driving – even when kids are riding along with them. According to many sources, including The Journal of Pediatrics, this isn’t safe.

The study also found that parents who used their cellphones while driving with children were more likely to engage in other risky behaviors with or without a child present, such as not wearing a seat belt or drinking while driving.
“[…] Distracted driving causes about one in four car crashes, according to the study.
In 2015, the number of fatal car crashes involving children 14 or younger spiked by 5 percent, reaching 3,477. An additional 330,000 individuals were injured. Talking on hand-held and hands-free devices, texting, phoning or using the internet are among the main causes of distracted driving by parents and caregivers, previous research has found.”

A 2016 study by Britain’s University of Sussex found that using a hands-free device while driving was as distracting as using hand-held technology.
What happened to protecting precious cargo?
There are campaigns against tech use and driving but they obviously don’t seem to be making much of an impact. According to a 2017 Bloomberg article, “Smartphones Are Killing Americans, But Nobody’s Counting.”

U.S. laws protect new technology. They have for over 20 years.
Recent legislation in Rhode Island penalizes drivers who are holding phones in their hands but there is no penalty to use hands-free cell phone systems or accessories, like Bluetooth. The Tech Industry will now be able to sell more products to Rhode Island drivers.

“Distracted driving” isn’t the only risk. CBSNews.com says that “#4 Dumb Thing to Boost Possible Cancer Risk is Using a Cell Phone When Signal is Weak.”

Cell phones and other devices produce more radiation in moving vehicles because they have to work harder to stay connected to towers.
Decades of research has already proven that all sources of wireless radiation exposure is harmful.

In 2009, Dr. Oz addressed increased radiation exposure from phone use while driving.
In 2011, CNN addressed increased radiation exposure while driving.
2012 research determined that cell phones and all other sources of wireless WiFi radiation disrupt the blood brain barrier which can cause it to leak.
This can lead to many health issues including cognitive impairment and reduced impulse control which can lead to all kinds of tragic circumstances behind the wheel and everywhere else.

Research has proven that exposure can increase pre-existing conditions even if it didn’t cause them.
In 2017, California Department of Health started including information about increased radiation exposure while driving in their brochures.
Drivers can reduce their radiation exposure by attaching cell phones to their dashboards. However everyone in the vehicle is still being exposed to it. There is no scientifically determined “safe level” of wireless radiation for kids or pregnant women. Pets can be harmed by exposure as well.

GPS technology can also be a source of exposure to harmful wireless radiation. It’s best to keep all wireless turned off inside vehicles if you are concerned about exposure.
The Tech Industry’s solution to “distracted driving” is automated vehicles (AVs) which are already causing accidents – sometimes fatal. AVs also emit harmful cell phone and wireless radiation. Coincidentally or not, many of these tech industry folks are also planning for doomsday.

Some elected officials are endorsing AVs, electric vehicles and everything else that “Big Wireless” is selling despite all the reports that we have been misled about the safety of all this technology.
Cell phones and other wireless devices have also been known to malfunction, catch fire, and/or explode, sometimes even inside moving vehicles.