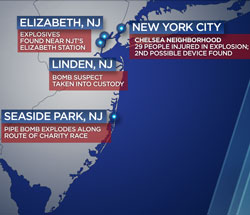 Even if you are not prone to believe in conspiracy theories, you cannot miss to observe some weird things about the pressure cooker bomb attacks that took place in New York City and New Jersey in September 2016 and the subsequent arrest of the alleged perpetrator.
Some things just don’t add up. You won’t even need to don your tinfoil because none of this is outrageous.

1. First, nobody died. Don’t get us wrong. We’re totally thrilled about that, but you have to ask yourself: “Why?”. With 29 people injured there were obviously a fair number of people around. Yet everyone was well enough to be discharged from the hospital within hours of the blast. Was the bomb just positioned badly? Or was it designed to cause injury, but not too much injury?

2. They sure found the mystery bomber quickly and efficiently. When you have to deal with the federal government, very often you may end up in an endless loop of phone transfers, when no one could figure out the right person to send you to. But they brought their game to a whole new level of efficiency with this that makes you wonder how anyone ever gets away with anything. The bomb fragments and the unexploded pressure cooker were examined and analyzed, a fingerprint was found, a match to the print was located on the system, and Ahmed Khan Rahami was identified. Then, the posters were produced, he was located due to a member of the public spotting him, and was then captured. All within 40 hours of the bomb blast, even though he was not on a terror watch list or flagged as a possible terrorist. Fast work.

3. Although experts say this type of thing is usually a group activity, no other persons of interest were being sought. Experts say that the chances of Rahami not having assistance with logistics, etc., was “infinitesimally small”. Mike Rogers, former chairman of the House Intelligence Committee, said, “Normally the way this works, you have a cell doing logistics, bomb-making and assembly, and an operational one.” Despite all of this, the New York Police Department said they are not actively looking for anyone else in connection with the incidents. 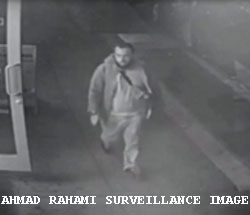 4. The culprit was just hanging around, asleep in a doorway like a homeless person, waiting to get busted. Rahami was spotted sleeping in a shop doorway and police were called. He shot at an officer and then ambled off down the street, shooting at a police car before being wounded and taken into custody. Now, there are two major issues with this. What kind of terrorist decides to curl up and take a nap in a shop doorway in an area he knows the police will be looking for him? Secondly, we all know the police have hair triggers… children get shot for holding a BB gun, the caregiver of an autistic man got shot while laying down, and an unarmed driver got shot in front of his kid… but this guy sets off bombs, shoots two officers, shoots up a police car, and then wanders down the road holding a gun, and he only gets wounded in the shootout?

5. The placement of these bombs wasn’t very strategic. Usually, someone who sets off random bombs in the name of terror wants to do as much damage and inflict as much fear as possible. If these attacks were designed to maim and kill, why not plant a bomb when there are crowds of people around? When you are less likely to be singled out by CCTV (street surveillance camera) walking alone at night shortly before the device explodes? It makes no sense, does it? Terrorist attacks invariably aim for maximum impact with minimum risk. This was a complete reversal of that modus operandi.

6. ISIS wants nothing to do with this one. The Minnesota stabbings that took place on the same day have been claimed by the Islamic State as an act “committed by a soldier of the Islamic State”. There have been no claims at all that Rahami has links to ISIS. 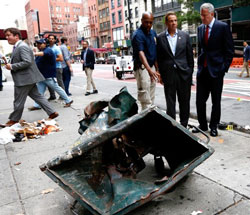 7. It wasn’t a very good bomb. The backpack with five bombs inside was found in a wastebasket around 9:30 p.m. on Sunday outside a neighborhood pub in Elizabeth, about 16 miles from New York City. Two men found the backpack about 500 feet from a train trestle and alerted police, officials said. One of those bombs exploded as a police robot tried to defuse it, yet the others didn’t. That must have been one very lame bomb if it couldn’t even blow the others packed into a bag with it apart or trigger the explosive component in the remaining four so they also blew up.

8. Somehow, the bomber didn’t really raise any eyebrows until now. Rahami was known to have travelled to Afghanistan, his home country, and also to Pakistan. This was known because he applied in 2011 to bring his Pakistani wife into the United States and the application was approved in 2012. So an Afghan national with a police record for trying to stab his sister-in-law traveled to Afghanistan and Pakistan spending months at a time there and it never raised a glance from any agency anywhere? The Transportation Security Administration (TSA) was satisfied he was visiting family. Obviously too busy harassing cancer patients. Despite all of that, there was no real suspicion about this guy until he was suddenly a major terrorist.

9. What do we need to be distracted from? This always has to be the question when these situations take over the news. And the list is long. This freak-show of presidential election in US, the fact that Russia is accusing the US of starting WW3 in Syria, the upgraded effort to take away guns and personal medical decisions, the newest WikiLeaks… we could go on and on about the things no one wants us paying attention to.

See what do we mean? Weird stuff. Lots of weird stuff. We are not saying it never happened or that this dude wasn’t a terrorist or that someone else was responsible or that this was a false flag. We are saying that there are holes in the official story that one could drive an 18-wheeler truck through.

But the official story sure does seem a bit questionable.
Or maybe Rahami is just so bad at being a terrorist that the Islamic State doesn’t want to claim him as one of theirs.