NWO-Paradox: How the ‘Disbanded’ Crusader Templers Finally Became the Foundation of the Caliphate! 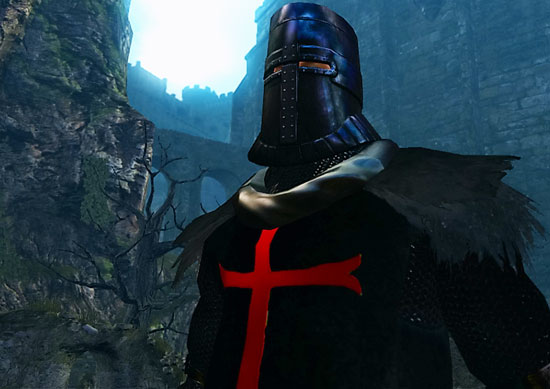 Time and again one hears that the crusades were crimes against the poor Muslims. Today this statement still flourishes with the Muslims – justifiably used about the foolish NATO warfare in the Middle East.
The crusades began in 1095 and ended in 1291.
The “Christian West” crusades were strategically, religiously and economically motivated wars. In the strict sense, the crusades are understood to refer only to the oriental crusades that had taken place during this period, which were directed against the Muslim states in the Middle East.

Nine Crusades are counted – but after the Orders of St. John (around 1050 AD) and later the Templers (1118 AD) were founded, European warriors, merchants, craftsmen, etc., were constantly pouring into the Middle East where they fought and built against the Muslim invaders – and finally lost. First, the tasks of the Crusaders was to accommodate the pilgrims and treat their illnesses (still applies to part of the Order of St. John) – as well as to protect the pilgrimage routes.

The Sovereign Order of the Temple of Christ: “The Temple Order works from ever for the union of the two complementary branches of the Abrahamic tree, Christianity and Islam, because this alliance is totally necessary for the accomplishment of the Parusie.”

However, this is only possible without Jesus Christ – so the gnostic Templars turned their backs on Jesus – and, according to the Chinon parchment, had to trample and spit three times the cross at their initiations! This attitude continued into the Jesuits, the heirs of the Templers, and through their Illuminati into Freemasonry.

The Crusaders were idealists at first, no question. But gradually they founded states and districts (Outremer) and became robbers, who saw godlike actions in killing and plundering Jews and Muslims.

As clearly shown by the video below, the crusades were limited – both temporally and geographically. On the other hand, jihad is expansive and imperialistic – as well as temporally unlimited – with the aim of a world caliphate. It goes even further today – is more massive than ever – paid and invited by Templar Freemasons and their masters in the London City and the Vatican.

Thus, the crusades were and remained defense measures – and later recaptures (Spain, Portugal, Southern Italy) – for the Christian religion. Doubtlessly, they have delayed the advance of barbarian Islam by several hundred years. Later, the Knights of St. John, in Cyprus, Rhodes and Malta, bravely and skilfully resisted Muslim pressure. Today, they are a Masonic part of the world-ruling Committees of 300 around Rothschild/Vatican. Here you can see its membership list. “We are all Jesuits”, EU Council President van Rompuy said about the top of the EU. 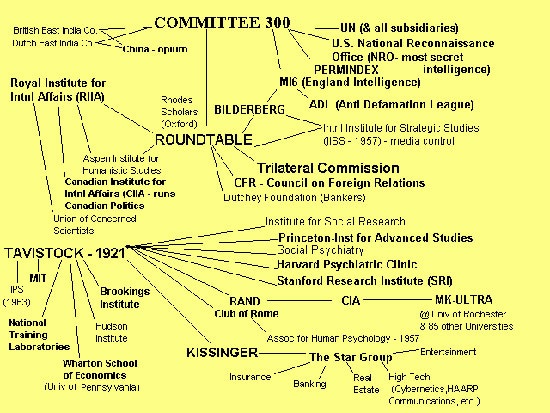 It’s all under Jesuit control, as you can see from the following excerpt from the article The Vatican New World Order, Nov. 2012:
“The following is just a portion of some of the organizations under the Jesuit command, according to Phelps: Under the Jesuit Order, the Illuminati organizations are Council of the 13 of the Bavarian Illuminati, Council of the 33rd degree Masons of the Scottish Rite, The 13 Satanic Bloodlines, The Committee of 300, B’Nai B’Rith and the Grand Orient lodges, Freemason (Scottish Rite/York Rite), Skull and Bones, Grand Orient Lodge, Grand Alpha Lodge, Knights Templar, Royal Order of the Garter, Priory de Sion, Rosicrucians, Thule Society, Knights of Malta, Knights of Columbus and the P2 Lodge. And going down the chart-list even further what’s even more astounding is that most every major religious group, educational group, political group and intelligence organization like the CIA, MI6 and Mossad have been in one way or another infiltrated and under the despotic control of the Jesuits.”

Many Knights Templar were absorbed into the Knights of Malta after they were disbanded in 1312 AD, and into the various Orders of knights in Britain, as well, and their gnostic/globalist ideas live on in Freemasonry today. European and North American political leaders are often members of these Orders.
If the Order is subservient to the Pope alone, and the British Queen and American President are members of the Order, who really rules the world? 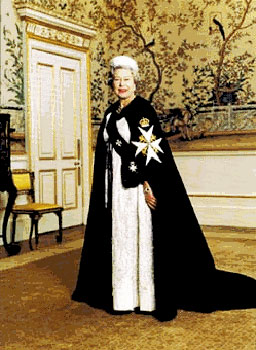 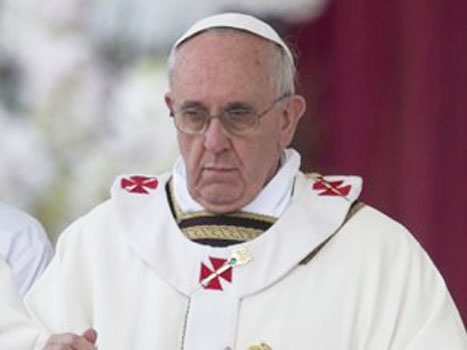 “Most American presidents have been/are involved in Freemasonry, which is an outwardly Protestant secret society that is actually controlled by Catholic Jesuits.

Presidents and other American leaders also have strong blood connections to British royalty, and many have been initiated into Knighthood in the Order of the Bath under the Queen.

American leaders give their allegiance to the Queen, and the Queen is subservient to the Pope, which is just another way that the Papacy controls America. And he wears the Maltese cross.

So what the Jesuits demand is carried out by Freemasonry. And who calls the Muslim invaders “a gift from God”? – Pagan Jesuit Pope Francis does, under the cover of the good Samaritan as advocate of free Muslim immigration as Catholic and protestant Churches unite and work for the Caliphate. 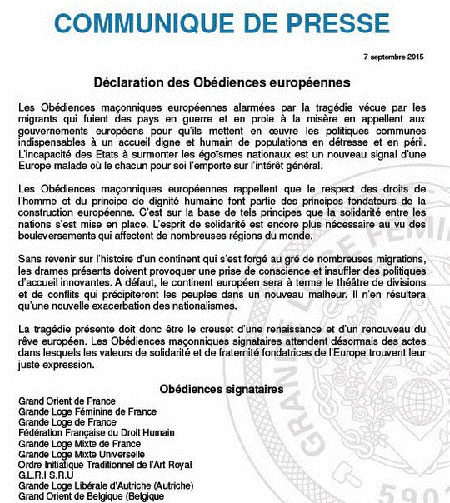 Here is an English translation:

“The European Grand Lodges are concerned about the tragedy due to the migrants who are fleeing countries that have been affected by war and are victims of misery. We call on the European governments to make the necessary common policies, to receive populations in need and peril in a worthy manner.

The inability of states to overcome their selfish nationalism is a new symptom of a sick Europe where everyone cares for himself and his interests.

The European Grand Lodges appeal for the respect for human rights and human dignity to be made some of the founding principles of the European construction.

It is on the Basis of such principles that solidarity was established between nations.

In view of the many upheavals concerning many regions of the world, solidarity spirit is all the more necessary.

Without resorting to the history of a continent that was forged through numerous migrations, the ongoing drama should provoke remorse and inspire refreshing welcome.

Instead, the European continent is finally the scene of divisions and conflicts that could throw the peoples into another disaster. From this, only a revival of nationalism will ensue.

Thus, the current tragedy has to be a melting pot for the rebirth of a new European dream.

The signatory Grand Lodges expect future legislation, in which the fundamental values of solidarity and fraternity find their appropriate expression.

The Masons and their politician errand-boys make no mention of the blatant violations of human rights by their wars of aggression in the Middle East/North Africa. Therefore, they tacitly approve of them: They deliberately chase the many young men in battle-ready age up here. The photo below shows a plethora of young men. There are few kids and only one woman. Do they come to practice jihad – or are they expecting family reunification with their 2-3 “wives” and their children and parents? This is an invasion by a hostile foreign army. 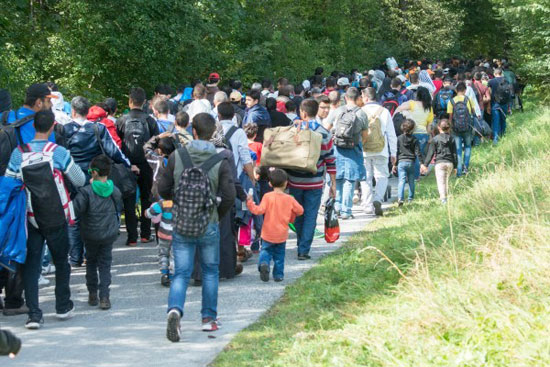 So now we know the reason for the lack of EU immigration policy: “Our” politicians do as their Grand Masters command them to do: Let all the refugees come in! And the Grand Masters have their order from their superior Masters, who have their orders from their supreme master. For these are occult forces.
Here, the spirits and masters of our politicians are speaking – because almost all of them are Freemasons. The above is an order to “our” politicians to continue to grant half the Muslim world asylum, in order to empower their NWO out of chaos.

From the above, the following can be inferred – all within the framework of the Illuminist/Communist 6-point program by Masonry’s chief ideologues, Adam Weishaupt and Mayer Amschel Rothschild:
1. Limitless immigration necessary;
2. Patriotism is “selfish”;
3. Europe is based on many migrations. So this martial tale of woe should continue and be increased;
4. If we do not accept tens of millions of Muslim immigrants, Europe will be divided and the scene of conflicts; and what will happen then – even with the recent Muslim immigration – including now thousands of jihadists?
5. The Freemasons demand “equality/solidarity” and “fraternity” – as in the bloody Communist French Revolution and in its successor, the Soviet Union;
6. From us locals the Masons merely demand that we behave passively to our demise into the “brotherhood” of Sharia. Otherwise we are nationalist egoists. Our culture and religion are not Masonic or EU values and due to the rapid islamization they will rapidly be extinguished or adapted an unchristian universal religion.

These Grand Lodges also speak on behalf of their masters, the Jesuits/Rothschilds. The Jesuits were the authors of today’s Freemasonry by means the absorbed Rosicrucians – and their Black Pope controls the Rothschilds and Freemasonry.