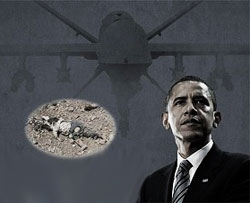 US President Barack Obama has admitted that Washington’s reliance on drones has its negative sides.

Obama was asked about whether US drone warfare could be a Pandora’s box in an interview with CNN on December 7, 2016. “I recognize the danger of a… war from a distance that starts looking like a video game”, he said. The president stressed, however, that American citizens need to be protected from threats to their security and as Commander in Chief, he had the responsibility of ensuring that during his presidency.

The United States reportedly began using drones in February 2002, in Afghanistan. US drone attacks in Pakistan, Afghanistan, Yemen and Somalia have decimated 3,500 Islamic militants, but have also caused numerous deaths of civilians. In July 2016, the White House said around 116 civilians were killed in US drone strikes in the period between 2009 and 2015, while watchdogs estimate the death toll actually stands at 3,000.

There are toxic chemicals hiding in your deodorant