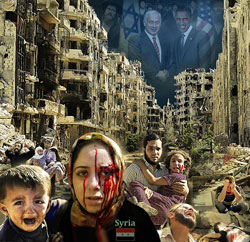 The Pentagon has admitted to killing 362 innocent civilians in Syria and Iraq in their pursuit of the Takfiri Daesh terrorist group.

In a statement released on April 30, 2017, the Pentagon admitted that U.S. military forces have unintentionally killed hundreds of civilians since 2014.

“We regret the unintentional loss of civilian lives… and express our deepest sympathies to the families and others affected by these strikes” the statement read.

Air Wars, which monitors civilian deaths from international airstrikes in the region, has estimated that more than 3,000 civilians have been killed in Iraq and Syria in the same period.

According to the Pentagon, investigations conducted during the month of March reveal that aerial attacks killed 45 civilians, mostly in and around Iraq’s northern city of Mosul.

The Combined Joint Task Force said in its monthly assessment of civilian casualties that it was still assessing 42 reports of civilian deaths in the two countries.

The force added that 45 civilians had been killed between November 2016 and March 2017.

It has also reported 80 civilian deaths from August 2014 to the present that had not previously been announced.

The military’s official tally is far below those provided by other groups.
The US Defense Department earlier said mid-September 2016 airstrikes had killed dozens of Syrian soldiers in the country’s eastern province of Dayr al-Zawr, with officials saying later that the attacks were based on wrong intelligence.

On December 9, 2016, at least 90 Iraqi soldiers were killed when US Air Force warplanes struck their position in Mosul.

The United States launched a campaign of airstrikes against Daesh in August 2014 after the terrorist group overran Mosul and parts of Iraq’s north and west.

The US-led coalition has been conducting airstrikes against what are said to be the positions of Daesh terrorists inside Syria since September 2014 without any authorization from the Damascus government or a UN mandate.

The coalition has repeatedly been accused of targeting and killing civilians. It has also been largely incapable of fulfilling its declared aim of destroying Daesh.