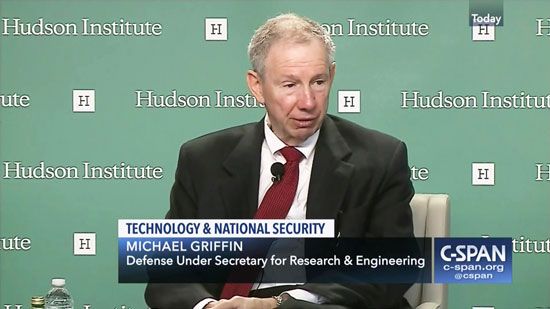 The Pentagon’s arms-research chief, Michael Griffin, is eying advancement in space-based directed energy weapons, Defense One reported.
“Directed energy is more than just big lasers”, Griffin said. “That’s important. High-powered microwave approaches can affect an electronics kill. The same with the neutral particle beam systems we explored briefly in the 1990s” for use in space-based anti-missile systems. Such weapons can be “useful in a variety of environments” and have the “advantage of being non-attributable”, meaning that it can be hard to pin an attack with a particle weapon on any particular culprit since it leaves no evidence behind of who or even what did the damage.

According to the report, the concept has existed since the early 1980s under what are known as neutral-particle beams. NPBs travel near the speed of light and penetrate a target and are designed as a missile defense system.
Over the years, the military has explored the application process of using NPBs to take out ICBMs (intercontinental ballistic missiles).

The Pentagon first tested a concept in the late 1980s, according to a 1990s write up that military scientists sent to lawmakers; the agency explored the possibility of a space-based weapon that could “kill missiles and reentry vehicles in the boost, post-boost, and mid-course portion of an ICBM trajectory as well as discriminated objects during the midcourse phase”.

Last September (2017), U.S. Defense Secretary Jim Mattis hinted at using a kinetic weapon while discussing tensions with North Korea when he made a Freudian slip, Activist Post reported.
Mattis was asked whether there was “any military option the US can take with North Korea that would not put Seoul at grave risk”. Mattis responded: “Yes, there are, but I will not go into details”.
Later during the press conference, another reporter questioned Mattis and caught him off-guard: “Just to clarify, you said that there were possible military options that would not create a grave risk to Seoul” a reporter asked. “Are we talking kinetic options as well?”
“Yes, I don’t want to go into that”, Mattis responded.

There is also the statement, made in January 2017 by Trump’s Air Force chief of staff, David Goldfein, who revealed to USA TODAY that the U.S. President could use “space weapons against ISIS”.
“If we want to be more agile than the reality is we are going to have to push decision authority down to some lower levels in certain areas the big question that we’ve got to wrestle with… is the authorities to operate in cyber and space,” he told USA TODAY.

In 2004, published in Popular Science, Eric Adams writes:
“A pair of satellites orbiting several hundred miles above the Earth would serve as a weapons system. One functions as the targeting and communications platform while the other carries numerous tungsten rods–up to 20 feet in length and a foot in diameter – that it can drop on targets with less than 15 minutes’ notice. When instructed from the ground, the targeting satellite commands its partner to drop one of its darts. The guided rods enter the atmosphere, protected by a thermal coating, traveling at 36,000 feet per second – comparable to the speed of a meteor. The result: complete devastation of the target, even if it’s buried deep underground. The two-platform configuration permits the weapon to be ‘reloaded’ by just launching a new set of rods, rather than replacing the entire system.”

Although the report states that the concept of developing NPBs only started in the 1980s, the overall concept of using kinetic energy weapons has been around since the 1950s when the RAND Corporation proposed placing rods on tips of ICBMs.
Of course, though, the Pentagon won’t say how far along the research is, or even confirm that any efforts exist, citing those details as classified. However, everyone knows about the infamous “Star Wars” Strategic Defense Initiative (SDI) – Ronald Reagan’s plans for a missile defense system, a project to set up satellites with lasers that could destroy any ballistic missiles which threatened the U.S.
So the idea of kinetic energy weapons system has been in the pipework for a long time.

If we look a little closer into the current millennium, there is also the fact that the U.S. Air Force Transformation Flight Plan, published by the Air Force in November 2003, references “hypervelocity rod bundles” in its outline of future space-based weapons; and, in 2002, another report from RAND, Space Weapons, Earth Wars, talks about the effectiveness of such a weapon.

A space weapons agreement was proposed by Rep Dennis Kucinich called the Space Preservation Treaty in 2005 which states that countries won’t seek to weaponize space. However, that bill never made it past the introduction stage. Another House of Representatives bill known as the H.R.2977 Space Preservation Act was proposed in 2001 to ban the use of “exotic weapons” listing the following:
“(B) Such terms include exotic weapons systems such as  –  (i) electronic, psychotronic, or information weapons; (ii) chemtrails; (iii) high altitude ultra low frequency weapons systems; (iv) plasma, electromagnetic, sonic, or ultrasonic weapons; (v) laser weapons systems; (vi) strategic, theater, tactical, or extraterrestrial weapons; and (vii) chemical, biological, environmental, climate, or tectonic weapons.”

Trump himself has hinted at disclosing this technology renewing the National Space Council by signing an executive order on June 30th 2017 in order to steer the future of American space policy and more recently stating “we need a space force”. This comes after last year’s proposal that stated for America and Russia to build a Moon base together.

In 1989, The New York Times reported that the Air Force had shut down another planned manned space program which sought a staff of 32 astronauts and a space shuttle launching facility in Colorado. It’s important to note that modern space shuttles only carry eight passengers maximum, so 32 would be an accomplishment indeed. The space facility and project cost an estimated minimum of $5 billion dollars, so why would they shut it down?

A WikiLeaks email entitled Impeach These Criminals Please – with 100 Attached Torture Case Summaries, also curiously mentions direct energy weapons from the global intelligence Stratfor files.
The email exchange was between several individuals within Stratfor in late 2007, including Aaric Eisenstein, the VP of Publishing at the time, and included an attached document of “torture case summaries” which is 152 pages in length.
The email is purported to be from an Australian man named John Finch, claiming to be one of the government’s many “Targeted Individuals”, subject to intense unbearable mental torture, mind control and 24/7 surveillance according to his own account.