Of all the small miracles to have come out of the tragic events of Sept. 11, 2001, it is perhaps one of the most instructive: a Bible verse fused to a piece of steel from the disintegrated buildings.

According to The New York Times, the piece was found by a construction worker on Tully Road, a temporary path used for trucks and other equipment at the World Trade Center site. 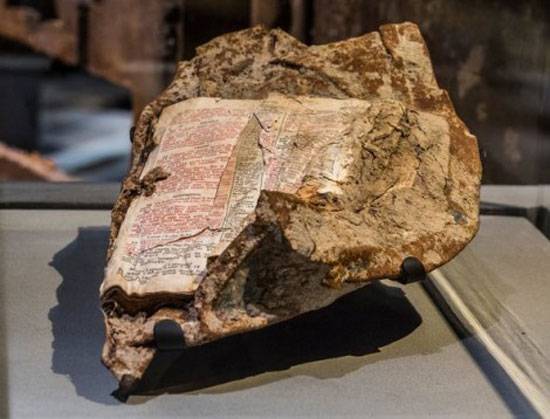 The fragment was found in March of 2002, and contained a portion of the Sermon on the Mount from the Gospel of Matthew.

“Retaliation” it read. “Ye have heard that it hath been said, an eye for an eye, and a tooth for a tooth. But I say unto you, that ye resist not evil: but whosoever shall smite thee on thy right cheek, turn to him the other also.”

Interesting, considering a verse from the Quran on that exact topic.

“And We ordained for them therein a life for a life, an eye for an eye, a nose for a nose, an ear for an ear, a tooth for a tooth, and for wounds is legal retribution” Quran 5:45 reads.

While the Bible certainly allows for self-defense, it’s worth pointing out that it doesn’t condone the smiting of unbelievers. That’s quite the opposite of the Quran, which prescribes such punishments for those who refuse to abide by the doctrine of Allah.

The Quran 9:73 also reads: “O Prophet! Make war on the unbelievers and the hypocrites. Be harsh with them. Their ultimate abode is hell, a hapless journey’s end.”

While the Prophet may not have made war on us that day, some of his followers certainly did.

Joel Meyerowitz, an author who was originally sent the photo of the fragment found on Tully Road, talked about the find in an email.

“This shredded, burned and rubble-covered Bible came to me from the loving hands of a fireman who knew that I was the record keeper of ground zero” Meyerowitz wrote.

“My astonishment at seeing the page that the Bible was open to made me realize that the Bible’s message survives throughout time” he said, “and in every era we interpret its teachings freshly, as the occasion demands.”

True enough – especially when it speaks to us with such clarity.