On August 8, 2016 the BBC published photographs and reported on yet another illegal incursion into Syria by Western NATO forces and yet another violation of Syrian national sovereignty by the United Kingdom. This time, the photographs show British Special Forces operating on the ground inside Syria in al-Tanf, near the Syrian-Iraq border, an area that is also near the Jordanian border. 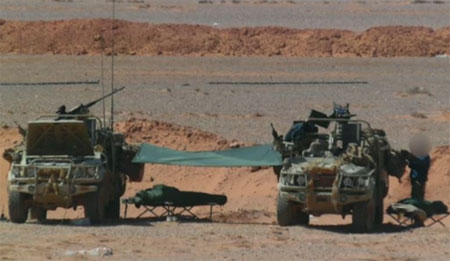 The pictures themselves date back to June of the same year and appear to have been taken shortly after a battle at al-Tanf between the New Syrian Army and ISIS, both Western-backed terrorist organizations. The British soldiers are photographed allegedly setting up a perimeter in order to guard the New Syrian Army base from further incursion by ISIS.

As the BBC reports, according to eyewitnesses, they were there in a defensive role. But they are carrying an arsenal of equipment including sniper rifles, heavy machine guns and anti-tank missiles.

If IS attacked again they would have been able to put up a considerable fight.
A New Syrian Army’s spokesman refused to comment on the pictures of the special forces, but acknowledged their help.

He said: “We are receiving special forces training from our British and American partners. We’re also getting weapons and equipment from the Pentagon as well as complete air support.”

Kareem Shaheen and Ewan McAskill of The Guardian added more detail in their own report published on August 9. They wrote:

“It is believed to be the first time British forces have been photographed operating inside Syria, where they are engaged in relatively small numbers in wide-ranging roles that include surveillance, advisory and combat.

The images depict British special forces sitting on Thalab long-range patrol vehicles as they move around the perimeter of a rebel base close to the Syria-Iraq border.

The Thalab (Fox) vehicles are essentially modified, militarized and upgraded Toyota 4×4 used for long distance reconnaissance and surveillance missions, which were developed jointly in the middle of the last decade by a state-backed defense company in Jordan and the UK company Jankel.

The vehicle, which has mounted weaponry and is often used for border patrols, has been primarily used by Jordanian special forces. 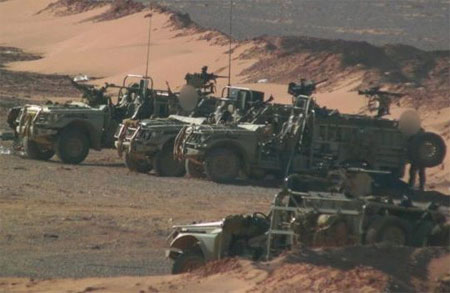 Al-Tanf, where the vehicles were reportedly photographed, is a border crossing between Syria and Iraq that had been under Isis control, and is also not far from the Jordanian border. It is unclear how many NATO countries have deployed the modified trucks, though Belgium ordered a shipment of modified Fox vehicles earlier this year.

The images seem to show British forces securing the perimeter of the rebel base following an attack by ISIS, according to the BBC. The soldiers can be seen carrying anti-tank missiles, sniper rifles and other heavy artillery.”

The New Syrian Army is designated as a “moderate” terrorist organization and fights under the umbrella of the Free Syrian Army, another Western-backed “moderate” operation that has committed innumerable horrific acts of violence and atrocities all throughout the Syrian crisis. It should be noted that the terrorist group that beheaded a young child on camera in the summer of 2016, Nour al-Din al-Zenghi, was also considered a “moderate” organization and one that had been “vetted” by the U.S. State Department as worthy of receiving TOW missiles.

As Michael Uhler of SouthFront describes the New Syrian Army:

“Unlike the clear knowledge surrounding American–YPG (People’s Protection Units, from Kurdish: Yekîneyên Parastina Gel) relations of involvement, much less is known about US ties to the groups operating in the deserts of southern Syria. Two important groups operating in this area are the ‘Forces of the Martyr Ahmad al-Abdo’ (Arabic: قوات الشهيد احمد العبده) and the ‘New Syrian Army’ (NSyA) (Arabic: جيش سوريا الجديد). Although both of the aforementioned groups receive support from the US, the level of involvement differs.

The partnership between America and the NSyA can be regarded as tighter than that of the YPG. Even though the NSyA could arguably be one of the smallest groups comprised under the so-called ‘FSA’ (Free Syrian Army), the level of training, coordination and equipment surpasses most other groups. Rumors have circulated indicating the possibility of Jordanian special forces within its contingent. (The NSyA has coordinated with the Iraqi government on multiple occasions surrounding the Syrian–Iraqi border). King Abdullah II of Jordan revealed that Jordanian special forces were indeed participating with rebels in this area. 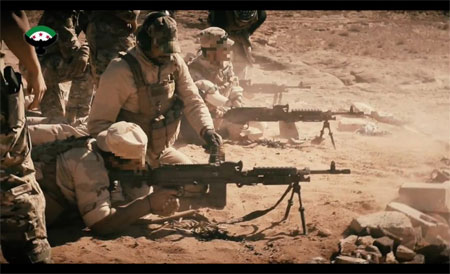 The sudden appearance of the NSyA occurred on November 15th, 2015. The NSyA launched its first operation on al-Tanf, which resulted in an attack on ammunition storehouses as well as on a bomb factory. Not much more information other than this video has been released about this raid. Bolstered by Jordan and America, the degree of cooperation can be seen in the group’s operational security (OPSEC). Quite different from the groups which fall under the umbrella of the FSA, the NSyA appears to be very professional and keen on keeping any sort of identification to a minimum.”

It is thus noteworthy that a group working so close with UK Special Forces and, perhaps, Jordanian Special Forces would also be the group that is so keen on keeping the identities of its fighters secret. While this may simply be a result of better training by Western Special Forces (despite relatively poor battlefield performance), many might be caused to wonder whether or not the Special Forces troops themselves make up the ranks of the group, making privacy a necessity not present with other terrorist groups across the country.

It is also worth noting that the photographs were taken in June 2016, the same general time frame as when the United States and Russian jets nearly clashed in the skies above al-Tanf.

“The mid-air confrontation occurred between F/A-18 fighters scrambled by the Pentagon and several SU-34s, Moscow’s most advanced bombers” Ted Thornhill wrote for the Daily Mail. “The Russian jets had struck a 200-strong garrison of Syrian rebels fighting the Islamic State in al-Tanf, near the Jordanian border.”

The Russian military did not deny the bombing raid but it did deny that it targeted Western-backed terrorists (i.e. terrorists publicly claimed by the United States), making the argument that the United States did not make the positions of its proxy terrorists known to the Russian Air Force. Russian Major General Igor Konashenkov, Spokesman for the Russian Defense Ministry, claimed the air strike was more than 300 kilometers (186 miles) away from the areas the U.S. had designated as being “controlled by legitimate opposition forces”.

It was not made clear which terrorist organization was being bombed specifically but, given the time frame and location, it is reasonable to wonder whether or not the New Syrian Army was the actual target of the Russian bombers and the reason the bombing mission provoked such a strong response from the US.

Regardless, what is known for certain is that both the United States and the UK have egregiously violated Syrian national sovereignty and are working alongside terrorists for the purpose of destroying the secular government of Bashar al-Assad. For this claim, no speculation is necessary.