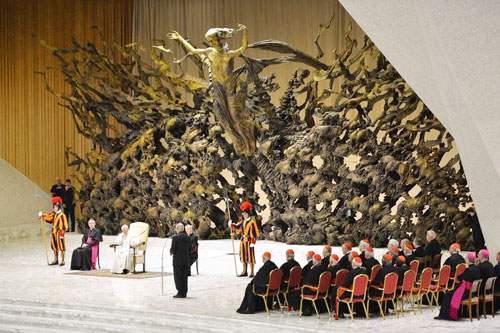 “The Resurrection” a statue behind the Pope’s throne in the Vatican hall, depicting Jesus rising from a nuclear bomb crater.


New World Order demagogue Pope Francis has rung in the New Year 2017 by calling for the establishment of a “global public authority” and a “central world bank” to rule over financial institutions and the increasingly unruly masses.

It seems the current occupant of St. Peter’s Chair will take on a new function which is outside the purview of the office that the Divine Founder of his institution had clearly mandated. Besides being a self-proclaimed expert on global warming and a vociferous advocate of societal-wrecking mass immigration, it looks as if Pope Francis has entered the realm of global economics specifically, international monetary policy.

In an 18-page document issued through the Vatican’s Office of Justice and Peace, the Pope has called for, among other repressive and wealth-destructive measures, the establishment of a “supranational [monetary] authority” to oversee international monetary affairs: “In fact, one can see an emerging requirement for a body that will carry out the functions of a kind of ‘central world bank’ that regulates the flow and system of monetary exchanges similar to the national central banks.”

The paper, Towards Reforming the International Financial and Monetary Systems in the Context of a Global Public Authority, contends that a world central bank is needed because institutions such as the IMF have failed to “stabilize world finance” and have not effectively regulated “the amount of credit risk taken on by the system”.

Naturally, as one of the planet’s preeminent social justice warriors, Pope Francis claims that if a world central bank is not commissioned, than the gap between rich and poor will grow even wider: “If no solutions are found to the various forms of injustice, the negative effects that will follow on the social, political and economic level will be destined to create a climate of growing hostility and even violence, and ultimately undermine the very foundations of democratic institutions, even the ones considered most solid.”

The Pope acknowledges that if a central monetary authority is established it will mean a loss of sovereignty and independence among nations, but such “costs” are well worth the overall societal and economic gains: “Of course, this transformation will be made at the cost of a gradual, balanced transfer of a part of each nation’s powers to a world authority and to regional authorities, but this is necessary at a time when the dynamism of human society and the economy and the progress of technology are transcending borders, which are in fact already very eroded in a globalized world.”

While the document demonstrates that Pope Francis has not a clue of basic monetary theory, it shows again that the Pope is a radical socialist who has more in common with the loony ideas of Karl Marx than he does with Roman Catholicism.

The ongoing and deepening financial crisis that Pope Francis seeks to address is not because there has been no global central bank to regulate more effectively the money and credit flow of the various nation states, but the crisis is because of the machinations of central banking. Central banking, through the fraudulent practice of fractional-reserve banking, has been the culprit in almost every financial calamity that has beset the Western world since the institution was first created.

If Pope Francis was truly interested in solving the financial crisis and alleviating the income gap between rich and poor, he would call for the abolition of this evil institution and advocate the re-establishment of an honest international monetary order based on gold and silver as money. But, Francis is more concerned with the redistribution of wealth from rich to poor. Yet, as sound economic theory has shown, this Leftist ideal is a scam. Redistribution of income never enhances the conditions of the poor but instead enriches the politically-connected elites and impoverishes the middle class.

Unlike what Pope Francis believes and what is taught in nearly all college and university economics classes, wealth can only be created by real savings (the abstention from consumption) and the investment of those savings into the production of capital goods which, in time, creates consumer goods. To foster such an environment, however, there must be a sound monetary order not open to manipulation via inflation and credit expansion by central banks.