President Duterte: CIA Want To Kill Me For exposing ISIS As Their Creation


Philippines president says he is targeted by US intelligence

President Rodrigo Duterte publically accused the CIA of creating and supporting terrorist group ISIS, and now says he has become a target for assassination as a result. Duterte claims that the U.S intelligence agency targeting his country by infiltrating ISIS militants in an attempt to overthrow him and destroy his country. 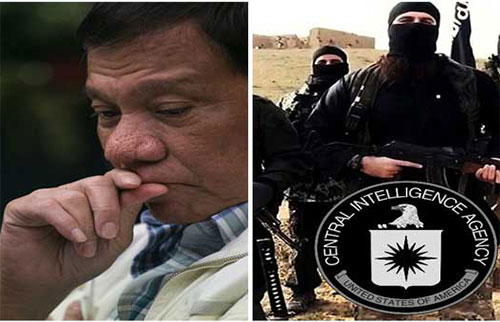 In an interview with Russia Today Duterte said: “ISIS has established a base in my country, down south. And we are fighting terrorism just like any country and we need arms. […] And suddenly, two Senators of the U.S. Congress said they will not proceed with the exportation. And I said no problem, I can always go to China or Russia.”

MPN reports: Clashes between militants and Filipino security forces took place at the beginning of may this year in the southern city of Marawi, as the government raided a home where the leader of the local branch of Daesh, Isnilon Hapilon, was believed to be hiding.
Hundreds of gunmen descended upon the city following the raid, including Daesh forces and members of militant groups that have pledged allegiance to Daesh, including Maute and Abu Sayyaf. Abu Sayyaf also shares links to al-Qaeda – an unusual arrangement, considering that al-Qaeda and Daesh are ostensibly at war with each other. As Daesh takes control of numerous landmarks and most of the residential areas in the city, the Philippine Army continues to control most of the city’s military bases and government buildings.
Heavy fighting continues as the Philippine Army attempts to reclaim areas lost at the beginning of this spring.

Marawi, home to a population of around 200,000, has already seen several Christians taken hostage. In response to the chaos, Philippine President Rodrigo Duterte cut his visit to Russia short and declared martial law in the entire region of Mindanao, where Marawi is located. The circumstances of Daesh’s advances in the Philippines are interesting, as its takeover came hours after an RT interview with Duterte aired in may this year in which the president offered sharp rebukes of the United States, including the suggestion that the U.S., particularly the CIA, is seeking to destabilize his administration.

Though Duterte asserted that he enjoys a friendly relationship with President Donald Trump, he added that Congress, the State Department and other arms of the U.S. political establishment are not in accord with Trump – making it difficult for him to count on the U.S. as an ally in his nation’s fight against terrorism.

“ISIS has established a base in my country, down south. And we are fighting terrorism just like any country and we need arms,” Duterte stated. “And suddenly, two senators of the U.S. Congress said they will not proceed with the exportation. And I said no problem, I can always go to China or Russia.” Duterte also made it clear in the interview that his foreign policy had “shifted from the pro-Western one.” “I am now working on an alliance with China and I hope to start a good working relationship with Russia,” he stated. 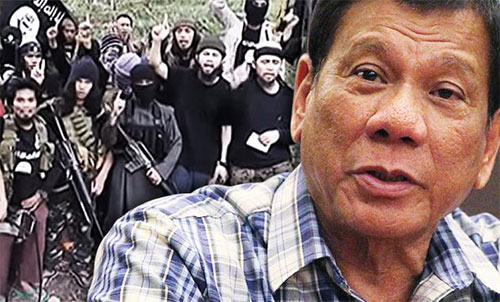 At the time of the chaos in Marawi, Duterte was visiting Moscow – assumably to negotiate an arms deal to replace one that has been stalled by the United States. He also rebuked U.S. efforts to continue to treat the Philippines as a colony, asking rhetorically “You treat me as if I am your colony still? You must be kidding?”.

Duterte also showed that he is aware of the price often paid by leaders who back out of strategic alliances with the United States, stating “I said about [removing] the American troops, that one day, during my term, if I survive the CIA, I still have five years to go.” RT responded with the question, “You talk a lot about assassination. Do you really expect that to happen?” “They do it. Does it surprise you?” Duterte retorted “[…] They can even take the president out of his country for him to face trial in another country.”

These statements suggest that Duterte did not expect his pivot away from the U.S. to go unnoticed. Duterte continued that the U.S.’ refusal to approve the arms deal pertained to his government’s violations of human rights. Duterte argued that this argument was hypocritical, stating that the U.S. has killed scores more civilians in nations around the world without “even a whimper” from the international community. “[…] in the guise of human rights, countries like [those of] the EU and America are interfering in the affairs of other nations. In the guise of human rights. […] Just like the Americans, when they drop a bomb there, it is so powerful that it also kills others there. […] So it doesn’t say that they are American they are exempted. And just because I am a small-time government official, I am not exempted. So, where’s the fairness there? When they drop bombs, they kill so many villagers and there’s not even a whimper.”

Duterte said most of the Daesh terrorists active in his country are foreigners. When asked “Do you think ISIS militants here, in the Philippines, are they homegrown or were they imported?” Duterte responded, “There are so many, Caucasian-looking. We have captured or killed six already. They are from the Middle East mostly.”