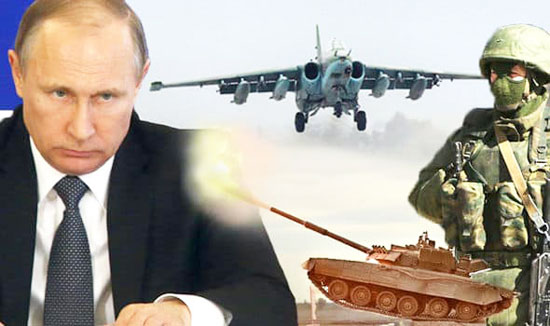 In yet another example of the prescience of the people in Sweden who are now preparing their nation’s 65,000 nuclear bunkers for war, and the vast majority of people in Russia knowing that World War III is immanent as tensions escalate in Syria, a recently released Ministry of Defense report circulating in Kremlin states that President Putin has authorized a “punishing” retaliatory strike against American military forces for their complicity in the murder of four Russian serviceman in Syria.
[Note: Some words and/or phrases appearing in this report are English language approximations of Russian words/phrases having no exact counterpart.]

According to this report, virtually unknown to the American people the US military presence in Syria is an illegal act in violation of international law as the Syrian government has not invited the United States into its country, nor are they at war or pose a risk to each other – thus creating a situation where the United States can now be labeled as a terrorist state under its own NATO rules that describe terrorism as: “The unlawful use or threatened use of force or violence against individuals or property in an attempt to coerce or intimidate governments or societies to achieve political, religious or ideological objectives”.

Equally not known to the American people, the report explains, is that the conflict in Syria was initiated by the Obama-Clinton regime for the purpose of eradicating Christianity from the entire Middle East. Syrian President Assad was the last protector of millions of Christian refugees flooding into his country fleeing from the barbaric Islamic terrorist group named ISIS that was created by President Obama and Secretary of State Clinton, in 2011, to launch “The Mother Of All Proxy Wars”. This was until September 30, 2015, when President Putin and the Russian Orthodox Church declared the conflict to be a “Holy War” for the protection of all Christianity, and Russian military forces took up arms.

In attempting to end this war on Christianity started by the Obama-Clinton regime, President Trump cut off funding to the American-funded terrorists in Syria, further declaring that he planned on removing US military forces from Syria too. Foreign Minister Lavrov countered that by saying the US was lying as it had no intention whatsoever of leaving Syria, most particularly due to the American shadow government “Deep State” having boxed Trump in thus limiting his ability to end this war.

Left unspoken was what the Americans’ true goal in Syria really is: nothing less than their capture of Syria’s entire oil region, by either “war or dialogue”, the Syrian government fully intends to take back control of.

During the late evening hours of February 7, 2018, the report documents, the Syrian government made a “war move” to take back control of part of their nation’s oil wealth from the Americans, and that saw a contingent of up to 500 Syrian and Russian mercenaries attempt to retake the vital Conoco oil facility in the Deir el-Zour province. US Secretary of Defense James “Mad Dog” Mattis then described the US response as being: “after the Russian high command in Syria assured us it was not their people, I then directed Chairman of the Joint Chiefs of Staff Joseph F Dunford Jr. to annihilate them”.

The Western account of the “annihilation battle” that then ensued between these Syrian and Russian mercenaries and US military forces describes how American electronic surveillance measures allowed US warplanes to arrive in waves, including Reaper Drones, F-22 Stealth Fighter Jets, F-15E Strike Fighters, B-52 Bombers, AC-130 Gunships and AH-64 Apache Helicopters that, for the next three hours, launched scores of strikes that actually did annihilate these mercenaries.

What may have been “perplexing” to Secretary Mattis about this attack, however, is that it provided to the Russian Ministry of Defense a “wealth” of intelligence on how the Americans use their electronic surveillance assets to coordinate and direct their forces in battle. All of this “newly found” information was then programmed into the highly feared Krasukha-4 Broadband Multifunctional Jamming Station – which is a Russian-made mobile electronic warfare system intended to neutralize Low-Earth Orbit (LEO) spy satellites, ground-based radars and airborne radars (AWACS) at ranges between 150 to 300 kilometers. 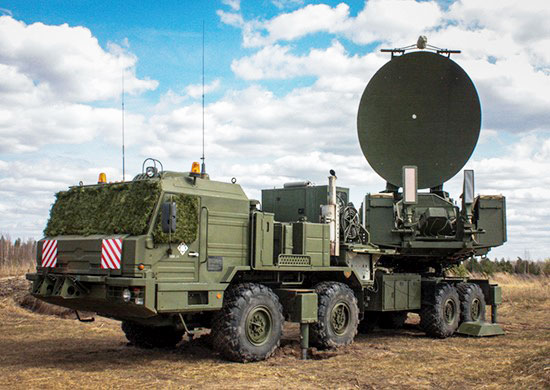 Within days from February 7, 2018 “annihilation battle” between the US and the Syrian and Russian mercenaries, the Russian Ministry of Defense began deploying “reconfigured” Krasukha-4 Broadband Multifunctional Jamming Stations into Syria under the protection of Russia’s most advanced SU-57 stealth fighters. General Tony Thomas, head of US Special Operations Command, solemnly noted their “activation” by his stating: “Right now in Syria, we’re in the most aggressive electronic warfare environment on the planet from our adversaries… they’re testing us every day”.

Among the electronic warfare operations the Krasukha-4 Broadband Multifunctional Jamming Stations in Syria have been involved in was detecting, in early April 2018, American helicopters secretly evacuating Islamic terrorist leaders from Syria to Iraq before they could be captured or killed by Russian-Syrian forces. One of the helicopters was crashed a week later on the Syrian-Iraqi border killing all 7 aboard, after which the Americans never did this again.

On May 21, the report says, the Krasukha-4 Broadband Multifunctional Jamming Station protecting the Hmeimim military airbase in Syria detected and directed fire upon an American drone, causing its destruction, and to that the US responded to by comically ordering the Syrian government to quit advancing on the Islamic terrorists infecting their country.

Most dangerously, though, this report concludes, in a further retaliation against one of their drones being destroyed, the Americans directed their Islamic terrorists to attack Russian and Syrian forces in the Deir ez-Zor Governorate. Up to 43 of these US-led terrorists, and their vehicles, were destroyed, but that, also, caused the outright murder of four Russian soldiers and the grave wounding of another five. To this, the Americans can fully expect an “equal-for-equal” counterstrike against, much sooner than they expect.