Putin: The Illuminati Hope To Start World War 3, I Won’t Let Them 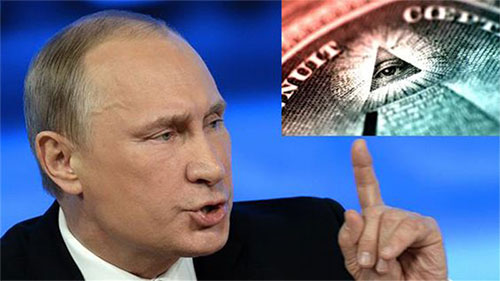 Since 2016, Russian President Vladimir Putin has endorsed a new security strategy which points to the Illuminati as a major threat to the country and world peace.

The strategy outlines the national interests and priorities of the nation. Putin signed an executive order in the beginning of 2016, establishing an aggressive position towards the Illuminati. They have seen their relationship with Putin turn rancorous since Jacob Rothschild accused Putin of “going rogue” and betraying the New World Order.

“I will stop them”, warned Putin, fixing the journalists at the press conference with his trademark pitiless stare. “I will plough like a slave on a galley to stop them”. Russian news agency TASS quotes the strategy, which cites an Illuminati push for war in 2016, as a threat to Russia’s security, and as a consequence, the peace and prosperity of the whole world.

“World War 3 must be avoided at all costs” said Putin. “It would be the greatest geopolitical catastrophe of all time. It will not happen on my watch.”

The Russian President is an avid Judo master, who keeps fit by exercising up to three hours every day, including holidays. Putin’s personal physician, Sergei Mironov, says: “He [Putin] has the quality of mind and spirit that enables a person to face difficulty, danger and pain without fear.”

Why Medicine Won’t Allow Cancer to Be Cured

Karma Yoga: Enlightenment Through Service to Others