Putin’s Message Couldn’t Be Clearer: the West Needs to Stop Provoking a War That We Don’t Want and That No One Can Win 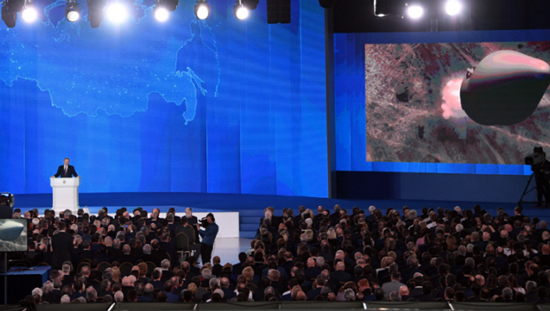 An article from The Guardian (Putin threatens US arms race with new missiles declaration) shows us their masters see this as just another chance to cast Russia as a dangerous rogue state. The Times took a similar line (Putin unveils his super weapons to defy the West). Elsewhere Putin’s speech is not only misinterpreted, it’s also relegated to sidebars in favor of photos of snow (Telegraph), or dropped into the tiny print at the bottom of the page (New York Times).

The western press has basically opted out of analyzing this, so let’s do it for them. Why was Putin talking about the new generation of weapons, in March (2018)? What did he hope to achieve?

First and foremost what Putin’s speech – just as all his previous warnings – is ultimately intended to do is avert a pending worldwide catastrophe. The US political class is too fluoridated, too driven by ideologues, too crazy to understand MAD any more. And its current policy, in concert with the EU and NATO, is one of continued unremitting provocation toward Russia, presented through the subservient and frankly stupid corporate media as “responding” to Russian “aggression”.

Since the “aggression” in question is no more than Russia exercising its lawful rights as a sovereign nation, what the US/EU/NATO nexus is actually doing is demanding Russia return to the client status it occupied in the 1990s or face continued threats to its security both physical and financial. They are trying to wear Russia down, convinced that sooner or later, if pressure increases enough, Putin will fold, withdraw from Syria, agree to “co-operate” with Western interests and generally get in line.

This policy only makes (very limited) sense if there is a possibility Russia will agree to these demands. But even a cursory understanding of the situation makes it obvious Russia literally can’t agree to what amounts to assisted suicide. It can’t.
The US/EU/NATO are making threats with no prospect of success. The only rational thing to do is realize this and back off. But instead they apparently think the best thing to do is increase the threat and increase and increase it – in the vain and stupid hope that someday it will work, and with no thought being given to what they will do if it doesn’t.

Despite some claims in alt news outlets, the US have no intention of starting a direct confrontation with Russia. Even they know this will be the end of life on Earth.
Their real delusion is not that they can win a nuclear war, but that they can continue to do what they are doing and avoid one.
What Putin is trying to do is wake them up to this reality. To make them see that if things don’t change nuclear war is a near certainty some time pretty soon. Not because anyone is actively seeking it, but because the road they are walking leads nowhere else.

In this he is essentially a man playing poker with an idiot. For the past few years he has been saying to Uncle Sam, smirking over his useless cards – “Look, you are fatally misjudging, we won’t fold because we can’t. Stop bluffing before you bluff yourself into starting a fight no one can win.” Remember this address to the press in 2016?

“We know year by year what’s going to happen, and they know that we know. It’s only you that they tell tales to, and you buy it, and spread it to the citizens of your countries. Your people in turn do not feel a sense of the impending danger – this is what worries me.
How do you not understand that the world is being pulled in an irreversible direction, while they pretend that nothing’s going on? I don’t know how to get through to you anymore.”

He didn’t get through to them. They listened, or pretended to and went home and continue to tell the same stupid unnecessary lies. In fact it only gets worse. The US continues to up the ante with hysterical fact-lite allegations. US intelligence officials compete to be the most delusional and insane, claiming the United States has been “attacked”. US warships gather in the Black Sea. US troops occupy Syria in defiance of the law, and bring themselves into direct opposition to the Russian forces legally deployed there. New rounds of US sanctions against Russia and its people proliferate, and an atmosphere of hate and fear is being deliberately fostered in which even a suggestion of compromise is regarded as treason. Now most corporate journalists actually believe only “bots” would suggest Russia’s POV is a legitimate consideration. This is a level of demonization and indoctrination unheard of outside a time of war.

There is no acknowledgement of the historical realities. No awareness of the fact that in this present and completely manufactured “confrontation” with the US/EU/NATO, Russia is being completely reactive. No real discussion of the fact this new generation of weaponry unveiled is nothing but a direct response to the US’s stupid move in quitting the ABM treaty in 2002 and its subsequent development of the Aegis “missile defense system”, currently being deployed in Japan, Eastern Europe and on US warships, and which threatens Russia’s cities in the guise of “defense”.

Russia warned at the time the US abandoned the ABM treaty that this was dangerous and destabilizing and would potentially tip the world into war. It told the US years ago it would feel the need to respond to any deployment of Aegis and its ilk. It begged the US to reconsider. But they were deaf and blind.
In that sense the ceremonial unveiling of the new weaponry is a sign the bluff is finally being called. If you think this is good news you’re really not paying attention.
“Nobody wanted to discuss the fundamental problems with us”, Putin said. “Nobody listened to us. Now you will have to listen!”

To those who for the last 15 years have been trying to provoke an arms race, achieve one-sided superiority over Russia, impose illegal sanctions… Russians say this: “You now have to acknowledge reality, realize that everything we said is no bluff. Take some time to consider. Stop jeopardizing this ship we all sail in – which is called planet Earth.”

Is anyone going to listen this time? Is anyone even able to hear? Judging by the zombified corporate media coverage so far – the answer is “no”.