Reptilian Type Beings Featured In Many Cultures Around The World 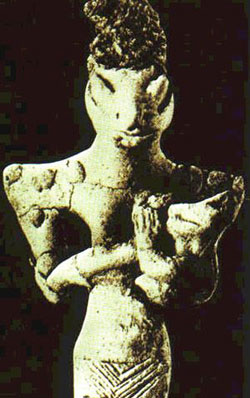 Extraterrestrials and UFOs are a very hot topic right now, and have been for quite some time, especially within the past few years. Why? Partly because it’s human nature to ponder the unknown and the mysterious, but it’s also in large part due to the fact that hundreds of high ranking whistle-blowers from around the world with verified credentials, have come forward sharing their stories and experiences regarding intelligent extraterrestrials visiting planet Earth.

The whistle-blowers range from professors, to NASA astronauts, all the way to high ranking military, political figures, and more. Not only that, to complement these testimonies, thousands of documents pertaining to the UFO/extraterrestrial issue have been released by dozens of governments. UFOs are no longer a fringe topic, and if the past few years have been any indication, more and more evidence is surely to surface in 2017 and beyond.

When it comes to supposed encounters with extraterrestrials, it’s very interesting for multiple reasons. Firstly, many stories shared by contactees corroborate quite well with each other. Many people report encounters with human looking extraterrestrials who are concerned with our planet and well-being. Others have reported the typical grey alien, human looking aliens with different colour skin, like blue, to reptilian type extraterrestrials. The key factor to remember here is, not all of these interactions are ET, some are simply US military. Knowing the truth about who’s doing what can be very tricky. 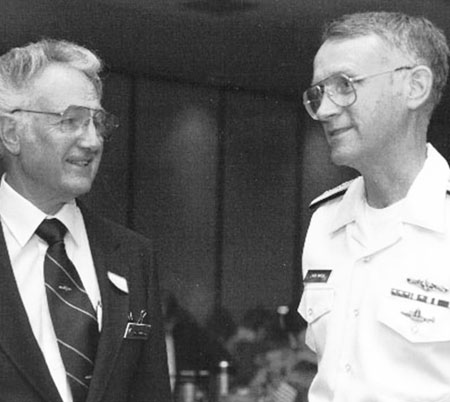 Above you see a picture of William Tompkins and Admiral Larry Marsh. As a teenager Tompkins had an eye for detail and loved to create Navy ship and submarine models. The Navy took interest in his capabilities and recruited him to do work on advanced technology projects. Recently, he has come forward with claims, as many others have, revealing information about clandestine black budget operation programs.

These are Special Access Programs (SAP). From these we have unacknowledged and waived SAPs. These programs do not exist publicly, but they do indeed exist. They are better known as “deep black programs”. A 1997 U.S. Senate report described them as “so sensitive that they are exempt from standard reporting requirements to the Congress.”

We have no idea what goes on in these programs, except from those who have worked within them, like Edward Snowden.

Tompkins has been speaking about supposed Reptilian beings within the past few years. Below is an interview he did with Dr. Michael E. Salla, Ph.D., an internationally recognized scholar in international politics, conflict resolution and U.S. foreign policy. He is a pioneer in the development of “Exopolitics”.

It’s interesting that legend suggests these beings could shape-shift into human form, because today, many people actually believe that some high-ranking politicians and royal families have bloodline ties to these beings and consider them actual shapeshifters. This theory has been around for some time, but was popularized by David Icke.

Icke was one of the pioneers that woke us up to the fact that mankind has been manipulated to become “unconscious” through the use of programming by media and politics, the tyrannical control over our food, water, and air supply, the dumbing down of the masses by pharmaceutical drugs and alcohol, and the list goes on.

According to Icke, there is a bloodline that has been strategically kept intact for ages. The Burkes Peerage and Baronetage, a comprehensive aristocratic genealogy resource, reveals that all 44 U.S. presidents have carried European royal bloodlines into office over the course of history. This includes Bill Clinton, the Bush family, Barack Obama, John Kerry, and so on and so forth. If we truly live in a democratic system, how is it that every single person brought into office has been of European royal descent?

What are the chances of this considering the U.S. fought for their independence of Europe in the 1700s? The Burkes Peerage makes a strong suggestion that elections are not really based on a public voting system, but rather, they are based upon the highest percentage of royal genes. To make things even more peculiar is the fact that Brad Pitt, Madonna, Marilyn Monroe, and Tom Hanks (some of Hollywood’s biggest stars) also descend from this lineage. What could all of this imply?

According to Icke, and others, there are reptilian type extra-dimensional beings that the globalists worship who stem from the constellations Orion, Sirius, and Draco. Thousands of years ago, the reptilian beings intervened on planet Earth and began interbreeding with humans. Not physically, however, but rather through the manipulation of the human coding, or DNA. Icke states that it is no coincidence that humans have fundamental reptilian genetics within their brain. He refers to an excerpt from the Bible, which hints at the crossbreeding of men and “gods”.

“There were giants in the Earth in those days; and also after that, when the sons of God came in unto the daughters of men, and they bear children to them, the same became mighty men which were of old, men of renown.” – Genesis, 6:4

Icke isn’t the only one

Icke recounts about his discussions with Credo Mutwa, a South-African based Zulu shaman, during which Mutwa tells of African legends about the Chitauri, the reptilian like “gods” who ascended from the heavens in monstrous vessels which burned through the atmosphere. These so-called gods became the dictators of the people, taking away the potentiality and power of the human race.

“One other thing that our people say is that the Chitauri prey upon us like vultures. They raise some of us. They fill some of us with great anger and great ambition. And they make these people they’ve raised into great warriors who make terrible war. But, in the end, the Chitauri do not allow these great leaders, these great war chiefs and kings, to die peacefully. The warrior chief is used to make as much war as possible, to kill as many of his people and those he calls enemies, and then, in the end, the warrior chief dies a terrible death, with his blood being spilled by others”, said Credo Mutwa on the reptilian-hyrbid leaders.

This is just a brief introduction regarding reptilian type beings. There exist countless amounts of literature from ancient mythology, as well as modern investigations.

Inevitably this question ALWAYS comes up during this discussion. This is not what this is about. In every way, this is about one thing: shifting our consciousness.

There is a big call for justice when it comes to cabal actions and truly this comes down to how one seeks justice. By exposing what is going on, the world will know what these souls have done, they will be outed, they will face the emotions of the people, and so forth.

Eleven things you need to let go of to be happy