Satanists Who Destroyed Middle East, are Back in Washington 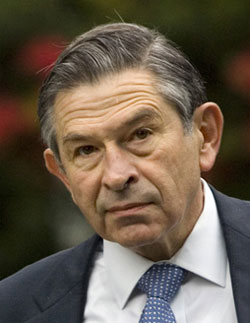 The Satanists who literally created chaos in Iraq, Afghanistan, and Libya are back in the White House. They are currently chilling with the Trump administration. One of those Satanists is none other than Paul Wolfowitz. Let’s see a little background of this dude.

When he was told by deputy national security advisor Stephen Hadley that there was no link between Al Qaeda and Saddam Hussein, Wolfowitz responded with certainty, “We’ll find it. It’s got to be there,” which is another way of saying that if it does not exist, they would make it up.

Both Wolfowitz and Douglas Feith were under investigation for passing classified documents to Israel. In other words, these people were and obviously still are agents of the Israeli regime. It must be stated in passing that the FBI has numerous documents tracing Israel’s espionage in the U.S., but no one has come forward and declared it explicitly in the media because most value their careers and lives.

For example, when two top AIPAC officials – Steven Rosen and Keith Weissman – were caught passing classified documents from the Pentagon to Israel, Gabriel Schoenfeld defended them. In the annual FBI report called Foreign Economic Collection and Industrial Espionage, Israel is a major country that pops up quite often.

This is widely known among CIA and FBI agents and U.S. officials for years. One former U.S. intelligence official declared:

“There is a huge, aggressive, ongoing set of Israeli activities directed against the United States. Anybody who worked in counterintelligence in a professional capacity will tell you the Israelis are among the most aggressive and active countries targeting the United States. They undertake a wide range of technical operations and human operations. People here as liaisons… aggressively pursue classified intelligence from people. The denials are laughable.”

In 1991, the Israelis tried to recruit a former U.S. intelligence official, but he declined. “I had an Israeli intelligence officer pitch me in Washington at the time of the first Gulf War. I said, ‘No, go away,’ and reported it to counterintelligence.”

Covert operations were done by the Israelis in “a 1997 case in which the National Security Agency bugged two Israeli intelligence officials in Washington discussing efforts to obtain a sensitive U.S. diplomatic document. Israel denied wrongdoing in that case and all others, and no one has been prosecuted.”

“Why not helping Israel and the Neocons?” 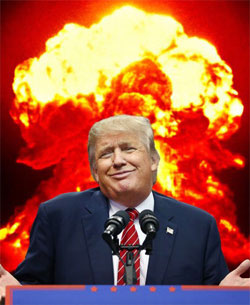 Yet this has rarely seen the light of day in the popular media. Pointing these facts out, according to the reasoning of Omri Ceren of Commentary, is tantamount to anti-Semitism. And since criticism of Israel and Jewish behavior is anti-Semitism, then Satanists like Paul Wolfowitz can walk on the political platform as they so choose because no one can touch them.

Wolfowitz has obviously seen that Iraq is not paradise, but he still wants to bludgeon America in the region—presumably for Israel. “The alternative is to let a very important, critical part of the world go to hell literally and lose American influence,” he declares. “We may not like to talk about oil, but this is the engine of the world economy and if it’s dominated by the wrong people, the consequences here in the United States are very serious.”

Wolfowitz was elated when he heard that Trump attacked Syria, and he has had private email conversation with “Trump Defense Secretary Jim Mattis and national security advisor H.R. McMaster, both longtime contacts since his Bush days.” He hopes that the Trump administration “will pursue a U.S. strategy of stepped-up engagement in the Middle East.”

Wolfowitz actually sees the Trump administration as a puppet which needs to be manipulated. “I think there is a fantastic opportunity here,” he diabolically declared. “ It’s only a first step, it’s only an opportunity.”

Opportunity to do what? To con the American people again? To send a six-trillion dollar bill to decent Americans who cannot even afford to feed their families? To loot pension funds for perpetual wars?

Keep in mind that Wolfowitz completely disavowed Trump during his election precisely because Trump kept talking about “America First,” an idea which is antithetical to perpetual wars in the Middle East. Now Satanists like Wolfowitz are all over the Trump administration because Trump has already prostrated before them.