Secret US Terror Camps Revealed – Terrorist Camps Are Now In Locations Across America, «ready for jihad»


There are somewhere between 25 and 30 verified Jihadist training camps in the United States. But they are on private property and the weapons they use to train with are legal. So all the FBI can do to monitor the situation is keep tabs on them from afar. But these Islamist groups are training for guerrilla warfare with Americans on their own soil. It’s a ticking time bomb.

Many of these camps were established as early as 2012.

From Conservative 101:
– Out of outgoing President Barack Hussein Obama’s many failed policies, his all-time single worst decision was not taking the threat of radical Islamic terrorism seriously.
– Instead, Obama promoted his childish “let’s be friends” policy that let an uncountable amount of terrorists and future terrorists into USA. Now Americans are paying the price.
– By contrast, President Donald Trump has been front and center in the effort to change the US policy towards terrorism.
– On Fox News, host Bill O’Reilly ran a segment that contained terrifying evidence about how terrorist camps have spread throughout the United States.
– It’s about time America had a President who will take the horse blinders off the US foreign policy with terrorists.

The training camps are connected to Muslims of America (MOA) and belong to Jamaat ul-Fuqra, a Pakistan Muslim Brotherhood and Al Qaeda-related branch. They train Muslim Jihadists how to fight and kill… the training is extensive and brutal.

“The organization says it has a network of 22 ‘villages’ around the U.S., with Islamberg as its main headquarters in New York. The Clarion Project obtained secret MOA footage showing female members receiving paramilitary training at Islamberg. It was featured on the Kelly File on FOX News Channel. A second MOA tape released by Clarion shows its spokesman declaring the U.S. to be a Muslim–majority country.

A 2007 FBI record states that MOA members have been involved in at least 10 murders, one disappearance, three firebombings, one attempted firebombing, two explosive bombings and one attempted bombing. It states:

‘The documented propensity for violence by this organization supports the belief the leadership of the MOA extols membership to pursue a policy of jihad or holy war against individuals or groups it considers enemies of Islam, which includes the U.S. Government. Members of the MOA are encouraged to travel to Pakistan to receive religious and military/terrorist training from Sheikh Gilani.’

The document also says that ‘The MOA is now an autonomous organization which possesses an infrastructure capable of planning and mounting terrorist campaigns overseas and within the U.S’. ”

These groups are extremely dangerous. They have armed guards on site and if you step on their land, there is an excellent chance you will be shot dead on the spot. Strict Shariah Law is observed at these facilities and Muslims train there by invitation only. They have to be dedicated to fighting infidels and willing to die for Allah to gain entry to the camp.

The FBI has been watching these groups for close to 15 years and they can’t touch them. They aren’t training for kicks. Sooner or later there will be full on war with radical Islam in the States. If you are in the US, note where these camps are and prepare accordingly.

With the ‘Obamalaw’ plan across America, a progressive takeover of state and local policing, according to a linked story from the Daily Caller, is exasperating as we find out that armed terrorist training camps are being run right in America with the full knowledge of US law enforcement, yet no arrests are being made and no raids conducted upon them.

Meanwhile, the eyes of ‘Obamalaw’ and American nation’s national security apparatus were squarely trained upon Christians, Constitution-supporting Americans, US Veterans and anyone else who disagreed with Barack Obama. Are Americans being set-up to be defenseless, sitting ducks?

These stories from Bradley County News and Terror Camps.com send out a loud and clear warning that Americans and their way of life in America are in grave danger as homegrown jihadis, being trained out of terrorist training camps now spread across America, are well positioned to strike key US cities, nuclear plants and other strategic targets while living in US communities, walking their streets and shopping, eating and dining with the American people, completely undetected and seemingly with the full support of the current administration in Washington DC.

Jihadi John, the sadistic ISIS killer hiding behind a mask while lopping off heads, was once called “the best employee we ever had” according to a former employer who also said of him: “He was very good with people, calm and decent”. How was Jihadi John suddenly radicalized and should his radicalization send a warning out to anyone who believes that “it can’t happen here”?

Shelbyville, Tennessee is a small American city, population approx. 20,000, that as recently as 2009 has seen a vast influx of Muslims from Somalia shipped in by the US Dept. of State as shared in the video below. Shelbyville is also the home of one of at least 37 terrorist training camps in America, well positioned to attack a nearby nuclear plant in Oak Ridge, Tennessee and all linked to one person, the Sheikh Mubarrack Al Gilani who has known associations to Al-Qaeda.

While the Clarion Project documents Gilani and homegrown terrorism in America, the White House Press Secretary has no clear answers as to why Obama and this administration are treating Muslims differently than they are treating Christians while more evidence emerges that ISIS/ISIL terrorists are being supported by US government agencies according to a linked Global Research story.

While in Norway, in 2016, government officials have taken the controversial step of deporting over 800 Muslims whom they had determined to have radical leanings, the move has had amazing results as violent crimes have dropped by more than 30%, numbers that every American should see and, though condemned by many American and European liberals, offer the American people a road that they might have to take “tostop evil from creeping into our backyards” though many see a move like that in U.S. as being “too little too late”.

Many of the terrorist training camps in Tennessee are reportedly fortified with heavy weapons, ammo and bomb making equipment as evidenced by a recent raid at a Colorado terrorist camp. This camp run by Gilani was searched by warrant when neighbors complained of loud noises and gun fire from the compound. 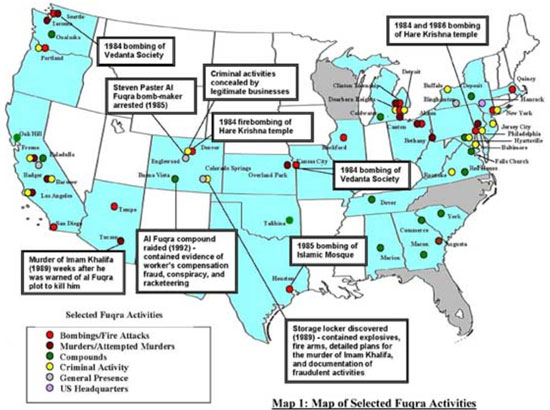 The 3 terrorist camps in TN are just a stone throw from I-24, allowing fast access to major road ways. The camps are nestled along the north, northwest TN border near Nashville. The Dover and Paris camps are about a 30 minute drive apart and about equal time to Nashville. The newly reported Shelbyville camp is approximately 90 miles from Chattanooga and about 57 miles south, southeast of Nashville.

These camps are well positioned near the heart of Tennessee and two of its biggest cities and population areas. Terror attacks could easily be carried out in this US state with dire consequences. Oak Ridge is just a short drive from these camps and is strategically close to a number of nuclear reactors.

With secretive US terror camps now being exposed as shared in the video below beginning at the 7 minute mark, we have to ask how much longer it will be until America finds out far too late that the entire country and its way of life is in danger?

This special is based on FBI documents obtained by Ryan Mauro of the Clarion Project showing that Muslims of the Americas, an organization linked to a group named Jamaat ul-Fuqra, is a terrorist threat. The group says it has 22 “Islamic villages” across the country and is led by a radical cleric in Pakistan named Sheikh Mubarak Ali Gilani.

“Observers” in and around the TN terrorist camps are reporting a lot of activity and military type movement. There is a stir in camps under observation by vigilant patriots that something may be impending in the near future.

Some of the most active camps in the USA are:

Somali refugees have resettled in America to escape the chaos of their homeland.
Army Staff Sergeant Joe Biggs says there is a connection between President Obama’s blatant ties to the Muslim Brotherhood and the terror cells that have quietly been populated for decades in the United States. FBI and State Department documents have designated organizations as terrorist, only to later have them wiped off of the terrorist list by the Obama Administration.