Seven Years Ago Today, the US Helped Murder Gaddafi to Stop the Creation of Gold-Backed Currency 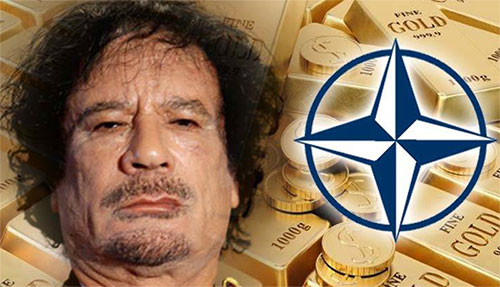 Seven years ago, the West took it upon itself to use NATO to overthrow Libyan leader Muammar al-Gaddafi – not for any humanitarian threat to civilians as had been repeatedly claimed, but because his planned roll-out of a new currency to be used across Africa posed a palpable existential threat to central banks at the heart of the Western financial and political system.

Long theorized to be the actual vehicle for Gaddafi’s downfall, the gold dinar-based, pan-African currency motive came to light in nascent 2016 in one of more than 3,000 of Hillary Clinton’s emails released by the State Department – conveniently timed with the New Year’s holiday to abate outrage or repercussions. And outrage there should still be. Plenty of false posturing in the lead-in to the ultimate overthrow of the Gaddafi regime should sour public trust in the West’s geopolitical motives, as a prime example of embroiling itself in unnecessary conflict every time a nation threatens to gain too much independence.

In March 2011, amid heightening rebellion of the Arab Spring, chaos came to Libya’s second-largest city, Benghazi, and the West and its allies quickly capitalized on those events to partake in a falsely-premised rebellion of its own.
Citing a decades-old U.N. Security Council resolution to invoke a nefarious no-fly zone over Libya to “protect civilians”, the United States, U.K., France, and others began a bombing campaign on March 19. In actuality, of course, that protection was of the central bank monopoly and, in particular, France’s financial interests in the historically French-colonial region.

“We are doing it to protect the civilian population from the murderous madness of a regime that in killing its own people has lost all legitimacy” railed French President Nicolas Sarkozy, who played a key role in Gaddafi’s fated demise.
“Colonel Gaddafi has made this happen. He has lied to the international community… He continues to brutalize his own people”, British Prime Minister David Cameron also asserted. “We cannot allow the slaughter of civilians to continue.”
As head of the U.S. State Department, Hillary Clinton intoned the scripted narrative, heralding the intervention in Libya as the need to “protect civilians and it is to provide access for humanitarian assistance”.

In the years leading up to the decision to topple the Libyan government, Gaddafi had made amends for the nation’s terrorism-pockmarked history, even agreeing to abandon and dismantle its chemical and nuclear weapons programs. In fact, Gaddafi so ameliorated Libya’s reputation, the U.S. removed the nation from its state sponsors of terrorism list in 2006.

But all of that was for naught once Gaddafi sought to pivot from central banks for the good of millions of people in Africa.
In the aforementioned memo released by the State Department, longtime Clinton confidante Sidney Blumenthal wrote the secretary of state on April 2, 2011, under the heading France’s client & Qaddafi’s gold, about several pertinent concerns in the ongoing siege on Libya.

It seemed to Blumenthal toppling Gaddafi might be a more cumbersome task than originally imagined, in part because the leader had “nearly bottomless financial resources to continue indefinitely” combating NATO and allied forces. Blumenthal wrote: “On April 2, 2011 sources with access to advisors to Saif al-Islam Gaddafi stated in strictest confidence that while the freezing of Libya’s foreign bank accounts presents Muammar Gaddafi with serious challenges, his ability to equip and maintain his armed forces and intelligence services remains intact. According to sensitive information available to these individuals, Gaddafi’s government holds 143 tons of gold, and a similar amount in silver. During late March, 2011 these stocks were moved to Sabha (south west in the direction of the Libyan border with Niger and Chad); taken from the vaults of the Libyan Central Bank in Tripoli.” 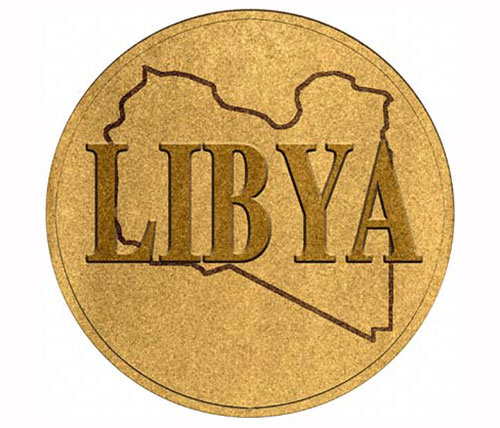 Indeed, the extent of the threat to the West’s central financial monopolies from the gold dinar-backed currency is made astonishingly clear as the now-notorious memorandum continues: “This gold was accumulated prior to the current rebellion and was intended to be used to establish a pan-African currency based on the Libyan golden Dinar. This plan was designed to provide the Francophone African Countries with an alternative to the French franc (CFA). According to knowledgeable individuals, this quantity of gold and silver is valued at more than $7 billion. French intelligence officers discovered this plan shortly after the current rebellion began, and this was one of the factors that influenced President Nicolas Sarkozy’s decision to commit France to the attack on Libya.”

Those unnamed sources cited five major points of concern for Sarkozy over Gaddafi’s innovative plan to escape Western control:
1. A desire to gain a greater share of Libya oil production;
2. Increase French influence in North Africa;
3. Improve his internal political situation in France;
4. Provide the French military with an opportunity to reassert its position in the world;
5. Address the concern of his advisors over Gaddafi’s long term plans to supplant France as the dominant power in Francophone Africa.

In what could best be described a gut-wrenching letter – considering the events to follow – Gaddafi, oblivious to the plot, penned a letter on April 6 to President Obama begging for an end to NATO-led airstrikes on Libya.

Addressing the president as “our son”, referring to Obama’s African heritage, the embattled leader wrote: “We have been hurt more morally that physically because of what had happened against us in both deeds and words by you. Despite all this you will always remain our son whatever happened. We still pray that you continue to be president of the U.S.A. We endeavor and hope that you will gain victory in the new election campaign. You are a man who has enough courage to annul a wrong and mistaken action”. Gaddafi added that “for the sake of economic and security cooperation against terror, you are in a position to keep NATO off the Libyan affair for good. As you know too well, democracy and building of civil society cannot be achieved by means of missiles and aircraft, or by backing armed member of Al-Qaeda in Benghazi.”

But his plea – as one sent just days before the bombing began, in which Gaddafi insisted: “even if Libya and the United States enter into war, God forbid, you will always remain my son” – fell on purposely criminally deaf ears.
On October 20, 2011, Gaddafi attempted in vain to flee the city of Sirte, and Libya fell largely under Western-backed rebel and NATO control by the end of the month.
Hillary Clinton’s deplorably merciless reaction: “We came, we saw, he died” played out in an interview shortly after Gaddafi’s shameful murder.

As usual, the U.S. and its Western counterparts left the country to its own devices after slashing the once-thriving nation to the ground.
“Today there is no government of Libya. It’s simply mobs that patrol the streets and kill one another”, Virginia State Senator Richard Black told of the mess left behind.
And despite certain issues in Libya before the coup, “Libyans had an incredibly high standard of living, the highest in Africa” international lawyer Francis Boyle told. “When I first went to Libya in 1986, I was amazed by the empowerment of women. What I saw in Libya was that women could do anything they wanted to do.”

Tragically, as has played out repeatedly around the planet, any nation, no matter how functional and successful, will be annihilated by the American empire if it or its allies have sufficient reason. U.S. Senator Black noted – as could be of any such nation – “We were willing to absolutely wipe out and crush their civilization”.

The immune system: the body’s battlefield