Recently, the US began to back-track on the official Anglo-American ‘Novichok’ conspiracy theory.
U.S. Ambassador to the UN, Nikki Haley, spoke to the U.N. Security Council regarding the report on the alleged ‘Novichok’ attack in Salisbury, United Kingdom. 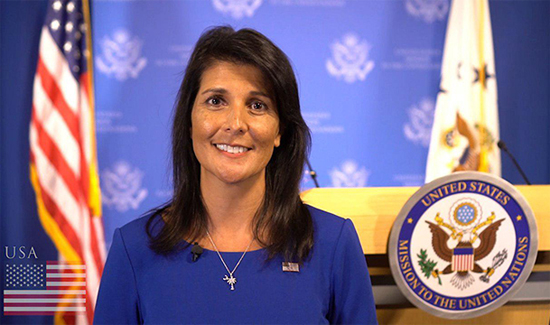 While Haley called on the world to condemn Russia for a “chemical weapons attack” on British soil – she also began back-tracking on the US-UK’s “highly likely” claims: “As we have stated previously, the United States agrees with the U.K.’s assessment that Russia is responsible for the chemical weapons in Salisbury. Whether that is in their direct act, or irresponsibly losing control of the agent, which could be worse, our support for our British friends and colleagues is unwavering”, Haley said.

In other words, the US are now hedging their previous certainty about Russian guilt in the Skripal poisoning and are now saying maybe Russia “lost control” of their deadly chemical arsenal (the same talking point which was included in Theresa May’s original hedging statement back when the story broke). Either way, the US and UK cannot produce any evidence to substantiate their initial damning allegations.

Since the incident, representatives from both the US and UK have been repeating a series of lies about what Russia did or didn’t do. Below is a list of those lies.

The UK’s narrative in the Skripal case is a “story woven with lies” with London continuously trying to “deceive” the international community, Russia’s OPCW envoy said, highlighting eight examples of such misinformation.
“We’ve tried to show that everything our British colleagues produce is a story woven with lies” Russia’s permanent representative to the Organization for the Prohibition of Chemical Weapons (OPCW) Aleksandr Shulgin told reporters following the organization’s meeting on the Skripal case.
“And, unlike the British, who aren’t used to taking responsibility for their words and unfounded accusations, we showed specific facts why we believe our British partners, to put it mildly, are ‘deceiving’ everyone.”

The official provided eight examples of UK-pushed misinformation, surrounding the March 4 (2018) events, when the former double agent Sergei Skripal and his daughter Yulia were poisoned in the town of Salisbury.

“In reality, they’ve asked us only two ‘questions’… And both were worded in such way that the existence of an undocumented arsenal of chemical weaponry at Russia’s disposal was presented as an established fact, beyond any doubt.”
It was effectively an ultimatum, pressing Moscow to either confess that it “attacked the UK with chemical weapons” or to admit that it had “lost control over the chemical warfare arsenal”.
Moscow answered both of these “questions” immediately, stating that it had nothing to do with the Salisbury incident. Apart from that, the official emphasized, it is an established fact that Russia destroyed all its chemical weaponry stockpile ahead of schedule last year.

The OPCW procedures clearly state that if one member state has issues with another, it should send an official request, and thus the other party would be obliged to respond within 10 days, Shulgin said. However, instead, the UK allegedly “instigated by their colleagues from across the pond” disregarded the established mechanism and came up with a dubious “independent verification” scheme, which violates those very OPCW rules.

While the UK and a number of its allies accuse Russia of “refusing to cooperate to establish the truth” the situation is exactly the opposite, Shulgin insists. Moscow is interested in a thorough investigation of the incident – especially since the victims are Russian citizens. Moscow repeatedly insisted on a joint probe and urged London to release data on the Skripal case, but all efforts were in vain. Many requests went unanswered by the UK, while others received only a formal reply.

Despite numerous speculations and allegations by questionable sources, cited by the UK’s own domestic media, it was Moscow that was eventually accused of coming up with some “30 versions” of the Salisbury events, allegedly to “disrupt the investigation” Shulgin said.
“In reality, the picture is different. In fact, it’s the British tabloids, the so-called independent media, which is multiplying those versions” the official stated, recalling some of the narratives, most of which entirely contradict each other.

6. Experts pin the blame on Russia

The head of the OPCW mission has clearly said that it was impossible to determine in which country the toxic substance used in Salisbury had originated. Yet the OPCW findings were once again used by the UK officials to claim Moscow was “highly likely” responsible. “Look, the head said it was impossible and they, abandoning all common sense, said ‘They’ve confirmed our evaluations that it was Russia’. How else can you evaluate this but as a lie?” Shulgin wondered.

7. “Novichok” is a Soviet invention, so it has to be Russia

The development of the so-called Novichok family of toxic agents more than 30 years ago in the Soviet Union was one of the main cornerstones in the UK narrative, pinning blame for the Skripal incident on Russia. Publicly available sources, however, indicate that “the West has been and still is conducting research and development into such substances” Shulgin said, giving a fresh example of such activities.

“Not long ago, namely on 1 December 2015, the US Patent and Trademark Office filed a request to its Russian colleagues asking to check patentability … of a chemical weaponry-filled bullet, which could be equipped with Tabun, Sarin or the Novichok family of agents”, the official stated.

You are all creative beings because God, who created you, is creative