Square the Circle with Earth and Moon 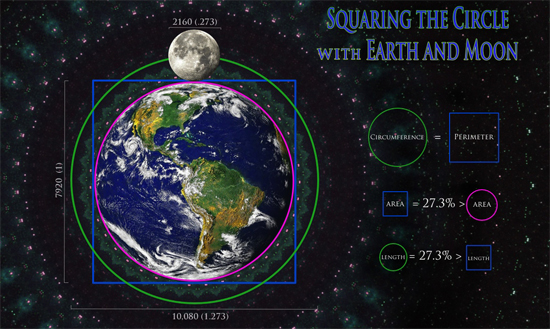 When we compare the size of Earth and Moon strange geometric synchronicities appear. The most fascinating of all is the ancient philosophical concept of “squaring the circle”, that is drawing a square with the same area as that of the circle. You can also “square the circle” with equal perimeters, which is what the Earth-Moon system do, to a very high degree of accuracy (99.97%).

The Earth and Moon’s diameters can be described as a simple ratio, 11:3, when comparing one to another. It turns out that this ratio is the solution to “squaring the circle” (of equal perimeter). The Moon describes a circle that has the same circumference as the square’s perimeter that surrounds Earth. This fact was discovered or rediscovered by the late and great John Michell.

The magic number found in these geometries is 273 (with the 2732 variation). This is an overlooked constant in our matrix of reality. Here are some findings on this number:

The square and circle, or in 3D, the cube and sphere, are key concepts in the teachings of Walter Russell, whom Walter Cronkite declared to be “The Leonardo Da Vinci of our time”.

It’s also interesting to note that 2732 – 2372 (its palindrome) = 360 which is a superior highly composite number, meaning it has a ton of divisors. 360 is also the number of degrees in a circle.