Super Mason Merkel effectively Managed to Destroy the Old World Order Importing Violence, Fear and Shame all over Europe in Favor of the NOW 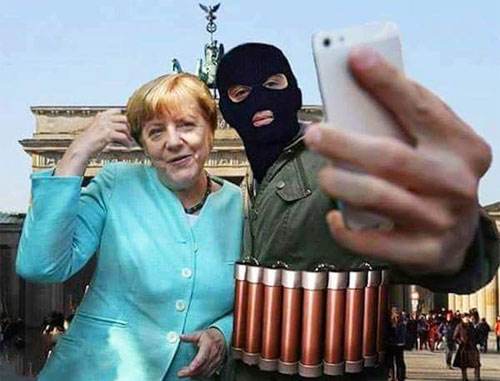 Swedish police force has seen great problems with funding and getting no-go zones under control. In one Swedish state, which is the size of neighbouring Denmark, budget cuts have reduced the force to a single police car.

Some Swedish politicians have called for drastic measures to counter the increasing lawlessness in the no-go zones, including a proposal to send in the military to support the police.

A survey of police across the European Union has revealed that many officers feel totally unprepared to handle another large wave of migrants – citing too few personnel and resources.

In Germany and the Balkan countries, officers complained that migrants had become increasingly violent and many said that they felt abandoned by politicians “Europe is fighting against illegal border crossings, crime, an influx of refugees and terrorism more than ever before,” van de Kamp said.

The matter of the fact is that Europe does not fight – it invites Muslims to come and settle and here – keeping all of them – only returning symbolically few who get a bag of our money with them – and they can return later to repeat the farce.

More than 30,000 migrants due for deportation have gone missing under Merkel’s watch. The government has no clue to their whereabouts, German newspapers report.

Putting a spin on the situation, a spokesman for the Interior Ministry told reporters that some of these migrants may have self-deported. Despite this wishful thinking, it is more likely that most of these illegal immigrants are still within the country and have simply gone underground.

A country which excuses for helping people in need is not Supermason Angela Merkel’country, she says.

Who are today the people in distress in Germany? The Germans or the Muslim immigrants who are being taken in, in unlimited numbers, protected, given Hartz IV benefits (like unemployed Germans) + free housing and health insurance after 15 months – Germans thereby growing poorer and poorer and exposed to unthankful Muslim young men who are and say they are – the soldiers of Allah?

Has Merkel read the Koran – or just Karl Marx?

Bild 24.10.2017: “Chemnitz – They are the most serious crimes. But in the daily press reports of the Saxon police, they almost never appear: Offenses in the refugee and asylum seeker accommodations in the Free State.
The figures from the Ministry of Minister for the Interior Markus Ulbig (53, CDU) are staggering.”

Figures from the year of 2016, which are listed in the Ulbig paper under “Scene of Crime Asylum seeker Accommodation / Refugee Accommodation”:

In addition, there are hundreds of cases of theft, coercion, resistance to police officers. The Ministry emphasizes to the Bild that nine in ten acts of “murder and manslaughter” are attempted homicides.

Why are many of the serious crimes secret?

A ministerial spokeswoman: “Which facts the investigating authorities declare to be press-free, depends on the circumstances of the individual case.”
Here i.a. the balance public interest and the protection of personal rights are to be considered.

In the first half of 2017, crime continued in refugee accommodations, as the answer of Minister Ulbig to a request by the AfD showed: by the end of June, there were already more than 500 personal injuries, manslaughter, hundreds of thefts, property damage, even cases of severe arson.

The Germans and Swedes as well as all other Europeans deserve this future, which in the Sharia is going to get tens of times worse and state-sponsored, because they keep on electing the guilty politician-traitors.