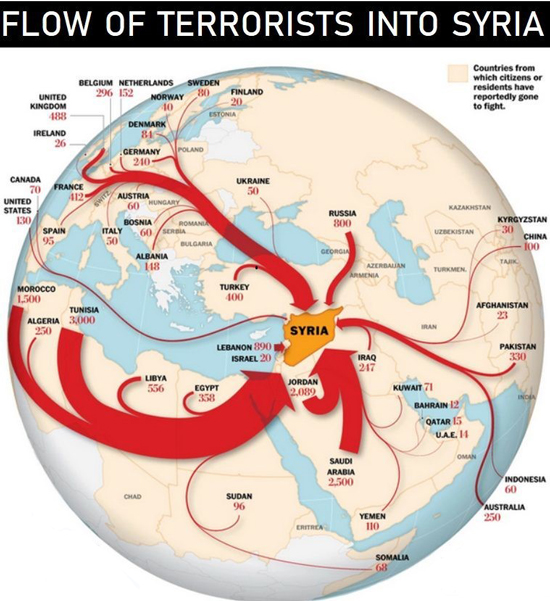 Although the Syrian war is almost over, many Americans still don’t understand what transpired over the last seven years, because the mainstream narrative has been an embarrassing mix of propaganda, half-truths and lies. Three versions of the conflict are presented here and the reader can choose the one that makes the most sense to them.

Once upon a time, a country called Syria was ruled by a ruthless dictator named Bashar Al-Assad. He was a cruel man who gassed his own people. His actions caused a civil war in Syria. America and Europe tried their best to stop the devastating civil war, and even generously accepted many Syrian refugees. Eventually America went to Syria, defeated ISIS, and is now trying to restore stability.

This above version is quite popular among many Americans and Europeans and the Western mainstream media.

Oppressed by Assad’s brutal regime, the Syrian people longed for freedom and democracy. One day, people started protesting in a small city. In response, Assad killed many peaceful protesters. However, this backfired and the entire country was engulfed in protests. Soon a civil war broke out, which led to millions of refugees fleeing Syria.

America was appalled and, for humanitarian reasons, decided to help the Syrians who were fighting Assad. When Assad gassed his own people, America intervened and removed all his chemical weapons. Unfortunately, Assad managed to gas innocent civilians again after a few years. Then, America went to Syria, defeated ISIS, and is now trying to restore stability.

The above version is presented in most of the global mainstream media.

Simply put, the Syrian “civil war” is an illegal, proxy war waged against Syria. In defiance of international laws, many countries have been sending weapons and terrorist mercenaries into Syria for the last seven years. 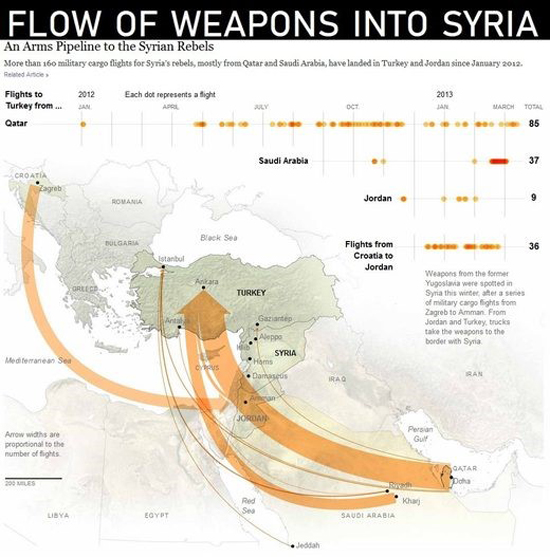 After the fall of Gaddafi in late 2011, the US State Department and US intelligence agencies organized the shipment of tons of deadly weapons such as Stinger missiles and sarin gas from destroyed Libya to Syria, via Turkey. Even with all this help, the American proxy force known as the FSA couldn’t win the war. At this point, NATO and Neocons wanted to bomb Syria, but Russia and China vetoed the motion in the UN, so the imperial war by deception moved on to the next phase.

In early 2012, someone dialed Al Qaeda (referred to as AQ or AQI in government documents). Zawahiri, AQ’s top leader, called for help and experienced Islamic terrorists from all over the world rushed into Syria by way of Saudi Arabia’s international jihadist recruitment agency. Secretary of State Hillary Clinton, received an email from her chief adviser, saying that “Al Qaeda is on our side”.

Al Qaeda rebranded itself as Al Nusra, and fearsome weapons such as grenade launchers, mortars, tanks and anti-tank missiles started pouring into Syria via Turkey and Jordan.
The CIA spent $100,000 to train each rebel. Billions of US taxpayers’ dollars were wasted once again on supporting the same terrorist groups that attacked the USA on 9/11. 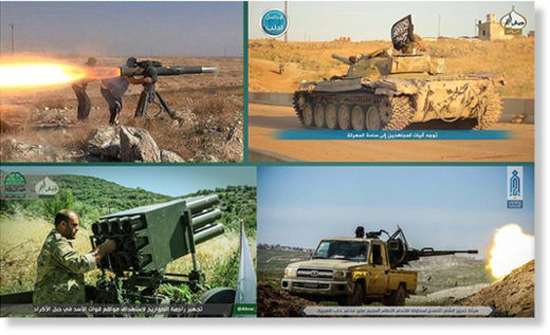 Watching the western media, the average person had no idea that Americans were supporting Al Qaeda, or how heavily armed these “rebels” were.
Western media and politicians also stuck to their talking points and referred to all these fighters as “moderate rebels”. However, many of them are ruthless Islamists who use suicide bombers, behead even children, and commit unspeakable atrocities. They are also religious fanatics who seek out and kill Christians and Shiites.

A Pentagon memo warned against this reckless policy and precisely predicted the rise of groups such as ISIS. Obviously the memo was ignored (or even happily accepted) by the White House and other officials.

2012 was also the year when the refugee crisis became a serious international problem. By the end of the year, almost 200,000 people had fled Syria. In the coming years, it would swell to five million.

When FSA and AQ failed to oust Assad, the powers-to-be started recruiting Sunni extremists in Iraq. In April 2013, ISIS was officially created. In the next year, these barbaric mercenaries would capture much of eastern Syria.
This was also the year when Obama’s red-line was crossed – the use of chemical weapons by Assad. UN experts who went to the site soon found that it was actually the rebels who had likely used the chemical weapons. The report was quickly drowned by the western propaganda machine.

The next two years were just repetitions of the daily brutality of war, with ISIS making huge gains in the east. Whenever the rebels started to lose, either more weapons would flow in, or Israel would fly into Syria and bomb the Syrian army.

In late 2015, the Syrian government sought Russia’s help. Within a month, the Russian air force weakened ISIS by destroying most of the oil tankers that ISIS was using to transport oil to Turkey. By the end of 2016, the Syrian government had the upper hand – Aleppo was liberated from Al Qaeda, and ISIS was running out of cash and morale.

2017 was turning out to be a great year for Assad. By March, ISIS had lost over three hundred towns to the Syrian army. 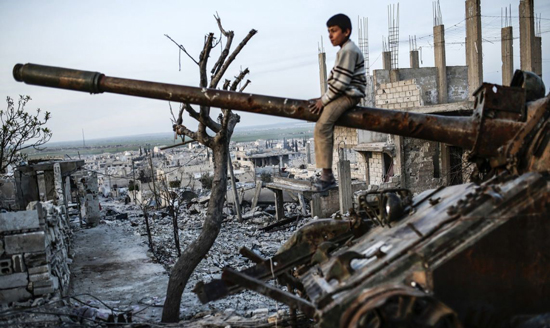 Al Qaeda was facing a similar demise, losing one big city after another.
Furthermore, Trump had stopped arming the rebels in February. In late March, Trump and Tillerson dropped the slogan “Assad must go”.

Finally, Assad was getting ready for an EU-UN peace conference on April 4-5.
This was the moment – when events had turned in favor of the Syrian government – that the alleged chemical attack occurred in an area controlled by the rebels. Plus it happened on the very day that the peace conference began.

Without any investigation, within an hour after the pictures and videos came out, Western warmongers declared that Assad was responsible. No independent doctors or experts were sent to the site. Anyone who took the time to critically analyze the situation could see that the chemical attack was either a hoax or a false flag attack.

After Russia had effectively defeated ISIS, the US didn’t just leave Syria, since the real goal is to Balkanize Syria and prepare for a war against Iran. Thus the globalists are now trying to use Kurds as a proxy tool in this effort. It’s likely that the US will have military bases in Syria for a long time. As long as the US government can keep borrowing money, such “wild adventures” will continue.

In their quest for hegemonic geopolitical goals, the elites are sowing more chaos around the world and irreparably damaging the western moral compass. The global mafia’s rule seems to be this: “If you play by our rules, we will be nice to you. If you don’t…”

Those are the three versions of the Syrian civil war. Which one will Americans choose to believe?

P.S. Here are some links to read if you would like to gain a Ph.D. version of the Syrian conflict:

– 1956: CIA plot to overthrow the Syrian government;
– 1983: CIA document on plans to obliterate Syria to enable an oil pipeline;
– 1986: CIA document on how to use Muslim Brotherhood to fuel a sectarian (Sunni v. Shiite) civil war in Syria;
– 2001: Wesley Clark told that USA will take out 7 countries in 5 years (Libya, Syria etc.);
– 2005: CNN Interview. Christiane Amanpour tells Assad that the western governments are plotting a regime change in Syria;
– 2006: State Dept. cable: Detailed discussion of various strategies to enable regime change in Syria;
– 2009: State Dept. email: Saudi Arabia is worried that a Shiite crescent is turning into a full moon (referring to a possible Iran-Iraq-Syria-Lebanon coalition);
– 2009: State Dept. cable: Saudi Arabia is the #1 source of funding of terrorism worldwide;
– 2012 State Dept. email: Conquest of Syria means a weakened Iran and this is important for Israel;
– 2012: State Dept. email: Use Saudi Arabia, Qatar and Turkey to arm/train rebels;
– 2014: Hillary Clinton admits in an email that Saudi Arabia and Qatar fund ISIS;
– 2015: Joe Biden says Saudi Arabia and Qatar arming/funding Al Qaeda in Syria;
– 2016: John Kerry in a leaked audio recording explains how the US trained/armed the opposition and was hoping to use ISIS to force Assad into negotiation;
– Israel’s Mossad chief admits helping Al Qaeda and says that it’s because Al Qaeda never attacks Israel.