TARGET IRAN: The Neocon Zionist Plan for an Apocalyptic War in the Mideast (1) 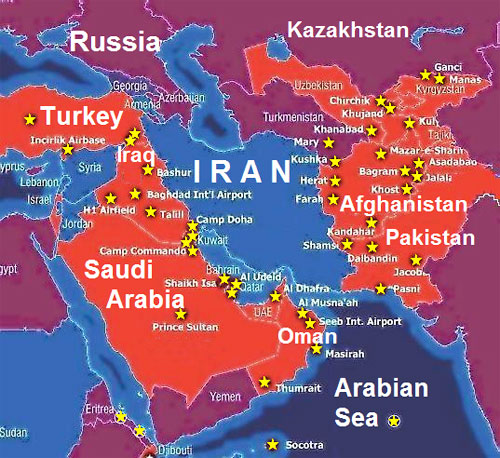 Key Pieces on the Global Geopolitical Chessboard Being Stealthily Rearranged for the Hot Phase of World War III ?

“2018’s extraordinary March Madness was engineered by NATO’s Operation Gladio to trigger yet another unprovoked war of aggression in the Middle East. 2018 has seen a cascade of fabricated and provocative events that point to the New World Order globalists. The same perps are planning more false flag terrorist attacks. These strategic acts of state-sponsored terrorism are being carried out by the leadership of the Zio-Anglo-American Axis in order to initiate the hot phase of World War 3. There is both a script and a schedule being strictly followed by this criminal cabal of Neocon Zionists. Each terror operation is always followed by a highly organized cover-up coordinated by the US, UK and Israeli intelligence communities, participating NATO militaries, Western mainstream media, major social network utilities, federal and local law enforcement agencies, as well as transnational corporate entities such as SERCO. These same co-conspirators also conduct stunningly sophisticated psyops before, during and after these black ops known variously as Operations Gladio A, B and C depending on their purpose and location.” Intelligence Analyst and Former Military Officer.

The Zio-Anglo-American Axis (ZAAA) has never been so determined, yet so thwarted, to initiate a global war between the world’s nuclear powers. Clearly, the individual and collective leadership of the most powerful nations within the Zio-Anglo-American Axis is both deranged and unhinged.
The month of March 2018 stood as a testament to just how insane the ZAAA governments have become, especially Israel’s Likud ruling party.

An objective analysis of the past 100 plus years indicates that these same countries have always been incorrigible warmongers. The big difference in 2018 was that the mischief makers really don’t care if the people witness their outright criminality and rampant corruption.

The workings of the government of the United Kingdom is a great place to watch this out-of-control crime spree taking place in broad daylight. The transparently contrived and false accusation by UK intelligence and law enforcement against Russia regarding the attempted murder of Russian double agent Sergei Skripal and his daughter Yulia was just one of many schemes to turn the world community of nations against Putin’s government.

First the spooks in MI6, MI5 and GCHQ conspired to frame Russia for an attempted murder of the Russian Skripals with a deadly nerve agent that likely originated at Porton Down.

Porton Down is a United Kingdom science park, situated just northeast of the village of Porton near Salisbury, in Wiltshire, England. It is home to two UK Government facilities: a site of the Ministry of Defence‘s Defence Science and Technology Laboratory (Dstl) – known for over 100 years as one of the UK’s most secretive and controversial military research facilities, occupying 7,000 acres (2,800 ha) – and a site of Public Health England.

Then the British government deceitfully used their own criminal acts as justification to expel several Russian diplomats. Furthermore, the Brits expectedly conned the U.S. and various nations in the EU to likewise expel numerous Russian officials.

“US expulsion of Russian diplomats is ‘declaration of war’” – George Galloway to RT.

Special Note: Not only did President Donald Trump call President Putin on March 20th to congratulate him on his landslide victory as president of Russia, he also proposed a meeting with him in the White House. Earlier, the Skripals were stricken with the Novichok nerve agent which Russia says was produced by a British bioweapons laboratory.

All the circumstantial evidence points to the great likelihood that GCHQ surveillance of White House communication picked up that Trump would attempt to meet Putin after he won the election. As a result, the UK Intelligence Community went into overdrive to draw the United States into their psyop as a way to sabotage that meeting.

The British russophobes also calculated that such a ‘brazen poisoning’ was a means to torpedo the 2018 World Cup being held in Russia, which it has subsequently done. The Brits used this poisoning scandal to generate russophobia worldwide, as well as to effectuate other specific preconceived outcomes. As always, British black ops like this are multi-purposeful. The Deep State globalists will do everything in their power to keep Trump and Putin apart. TPTB know that such a powerful collaboration for peace would wreck their New World Order agenda, forever.

If the world doesn’t know by now, the Brits are, indisputably, the most skilled prevaricators and provocateurs on the planet. That’s because they mastered the English language long before the rest of the humanity. Especially where it concerns executing false flags, the British intelligence community is both unsurpassed and peerless (Yes, they often work in tandem with the CIA and MOSSAD). But their real skill and long-time experience lie in falsely blaming Russia for everything they themselves are guilty of. For instance: It wasn’t Russia that tried to fix the 2016 U.S. presidential election; it was the British.

1. Because Russia holds the key to world peace. Putin has worked assiduously to stop wars that could have been much worse. His valiant efforts are invariably met with unparalleled persecution from the Western powers. He is consistently demonized as a new ‘Hitler’ while Russia is unjustly prosecuted for baseless accusations.

2. The Russian Federation also possesses the largest landmass on Earth – almost as big as Canada and the United States combined. The British have intensely coveted that resource-rich landmass for centuries. In fact, for as long as they have known how far it stretches from east to west. They even initiated the Great Game as a means of stealing and/or controlling the Russian border areas. The never-ending Great Game is actually an unending war on Russia that the Brits (and now the Americans and Israelis) refuse to abandon. Nowadays, both London and Tel Aviv use the U.S. military and/or NATO whenever it concerns poking the bear. 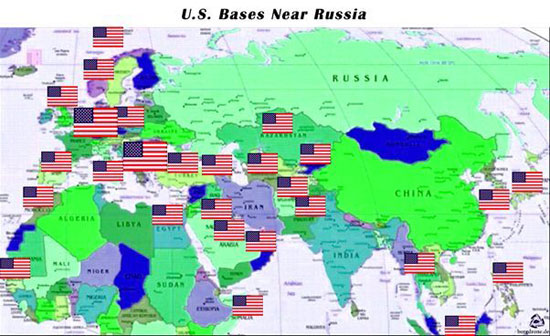 3. Lastly, because the Third World War so desired by this real Axis of Evil – not Iran, North Korea and Syria – can only be staged with the full participation of Putin’s Russia. Hence, the ZAAA warmongers do all they can to entice the Kremlin into a manipulated conflict. However, Putin et al. have already been around this block.

The Kremlin is totally aware of the enormous conspiratorial plot to stage Armageddon by the Neocon Zionist warmongers. The Russian government knows every crazy lunatic within the Trump administration – both Jewish and Christian Zionists – who subscribe to the whole preposterous, yet exceedingly dangerous, Armageddon enterprise.

President Vladimir Putin, Foreign Minister Sergey Lavrov, Prime Minister Dmitry Medvedev and every other major player in the Kremlin know just how profoundly misguided and ill-fated such a harebrained scheme truly is. They are equally determined to avert war by every means possible.

Only because the BRICS-aligned nations are populated by leaders who are well aware of this “Road to Armageddon” connivance have the various ZAAA machinations to trigger a Third World War been repeatedly thwarted. Nevertheless, the extraordinary March Madness of 2018 indicated that the NWO cabal will not relent until they fulfill their most apocalyptic (and fake) prophecy known as the biblical Armageddon.

Was 2018’s March Madness manufactured to set up “April Aggression”?

The Powers That Be really do prefer to stage some of their most devastating events during the month of April. In western astrology, April (and especially Aries) is ruled by Mars, the god of war. The Illuminati always consult their astrologers before they carry out any major invasion, violent attack or shocking assault.

The following list of the Illuminati’s handiwork illustrates just how much they really do like April as the month to shock the consciousness of the people. But why else is April the month of so much wanton aggression, so many false flag attacks, and so many profound assaults? 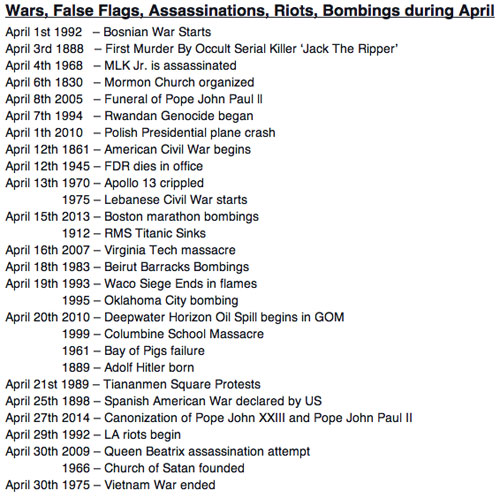 Given the spate of obvious provocations being staged by the Zio-Anglo-American Axis against both Russia and China, it appeared that the Western powers were again getting ready to rumble in spring of 2018.

In fact, there has been such a steady stream of patently false allegations leveled at Russia that the only purpose must be to soften up the mainstream media audience for naked war propaganda. Waging war by deception is always preceded by a blatant campaign of disinformation, particularly when the UK, US and Israel are behind it.

For these and other reasons, the April month is likely to always see a dramatic uptick in all forms of outright propaganda. Last year there were clandestine plans afoot to start wars and conflicts on various fronts. For instance, while Trump said he will withdraw the remaining 2000 plus U.S. troops from Syria (an excellent move), he gave his tacit approval for another NATO military power – France – to take over (a terrible move).

So, should hostilities in Syria heighten after an invasion by France, the many war hawks throughout the Trump administration will certainly scream for NATO intervention. And that means the ‘official’ commitment of U.S. Armed Forces. This is how they will attempt to confer a veneer of legitimacy on any US/NATO aggression? Up until now, the American military presence in Syria is well-known to be a flagrant violation of international law.

In point of fact, every U.S. military incursion into Syria is technically an act of war. Then there are the numerous war crimes committed against the indigenous peoples of the Northern Levant by U.S. Special Forces during the execution of their unceasing black ops. Most of the hostilities throughout Syria are carried out by Pentagon-led rebel armies, CIA-directed terrorist groups and State Department-supported opposition fighters.