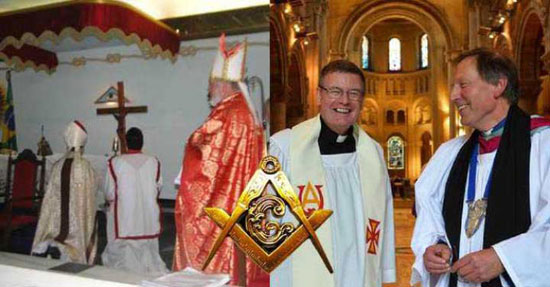 “For many deceivers are entered into the world, who confess not that Jesus Christ is to come in the flesh. These are deceivers and antichrists.

Look to yourselves, that we lose not those things which we have wrought, but that we receive a full reward. Whosoever transgresseth, and abideth not in the doctrine of Christ, hath not God.

He that abideth in the doctrine of Christ, he hath both the Father and the Son. If there come any unto you, and bring not this doctrine, receive him not into your house, neither bid him God speed: For he that biddeth him God speed is partaker of his evil deeds.ˮ (John Letter 1:7-11)

The rationale for the Synod’s longstanding position on the lodges: “Pastors and laypeople must avoid membership or participation in any organization that in its objectives, ceremonies, or practices is inimical to the Gospel of Jesus Christ or the faith and life of the Christian church. It is because tenets and practices of Freemasonry conflict with the Biblical Gospel of Jesus Christ.ˮ

So, the Catholic Church officially forbids Masonry – but since Pope Paul VI, the popes themselves seem to have been Masons.

The “mother of Masonryˮ is Jesuitism which now rules the Vatican, which in 1963 enthroned Satan as its master. Nevertheless, Lutheran Churches are now returning to the “Mother church”.

The Freemasons show off to be committed to the public as a humanitarian organisation, man is the only decisive center. They plead for the tolerance of all religions, but they are a secret covenant, which aims to create a world without Jesus Christ, both politically and also religiously.

The extent to which this has already been achieved can be seen in the successes of these unity efforts of the churches and religions, as well as of the international community in the political sphere.

Think of the United Europe or the United Nations, as well as the World Church Council; They are all intertwined with each other. The UN is known as the Great World Lodge of Freemasonry, with its seat in the Glass Palace in New York.

The Freemasons want Christians to be more tolerant in every respect so that they can unite and mix everything up. For this, sin is trivialized and good is mixed with evil.

Evangelische Zentralstelle für Weltanschauungen Nov. 2010: “Since the joint discussions with the VGLvD (1973), the Evangelical Church in Germany has had no objections with regard to the lodge membership of an evangelical Christian, it leaves it ‘to the free discretion of the individual’” (cf. Pöhlmann, Misconduct, 188).

Evangelische Allianz in Deutschland 8. Okt. 2012: “1,500 Freemasons from 50 countries celebrated their rite in the Lutheran St. Michael’s Church in Hamburg.ˮ

A commentary by the Protestant theologian and worldview expert Michael Kotsch (Bad Meinberg): “The main pastor of St. Michaelis, Alexander Röder, was sighted on 19 October at the Lodge house in the Moorweidenstraße. Of the formerly 80,000 members in 1930, 14,000 are left today in Germany? – around 5 million worldwide.ˮ

Nevertheless, one can be a member of the Evangelical Church of Germany and in a Masonic lodge. On its homepage, it states: “We say there are many ways to achieve the goal, e.g. Through discussions and conversations, through art, drama, music, painting, etc., perhaps religion.”
Every religion is considered merely one way among many to reach Masonic self-perfection. “As a freemason, we belong only to the general religion.ˮ

Although the Freemasons themselves announced on their website the Masonic ceremony in the Cathedral of Canterbury, neither the BBC nor a daily newspaper reported. This is called total control over the reporting. It is up to you to decide what was written about it.

Welby´s decision to open the main church of the Anglicans to a Freemason spectacle was quite controversial, but he succeeded. The Freemason ritual was led by the Anglican side of the dean of the cathedral, Robert Willis, who entered in vestments before his lodge brothers.

In return, the lodge brothers donated 300,000 pounds for being allowed to use the Canterbury cathedral. “The money for the restoration purposefully flows into the building hut of the cathedral. Masonic ashlars were built into the Canterbury Cathedral in memory of the ceremony.ˮ

Welby is known for its proximity to Freemasonry. As a dean of the Anglican Cathedral of Liverpool, he ensured that a Freemason’s symbol would be placed on a lift that had been financed by the Lodges.

“Due to this proximity, he is being criticized by parts of the Anglican church. Several clerics accuse him of not taking into account the Anglican synod resolutions in his revaluation of the relationship between Christianity and Freemasonry, most recently the decision of the general Synod of 1987, but also of the judgments of various church judges.ˮ

No one, however, would doubt seriously that since the XVIII century there has been a close connection between British Freemasonry and the Cathedral of Canterbury.

The cathedral is always being bestowed by the Grand Lodge of London with considerable donations, which are used to restore the cathedral. The Masons thus symbolically want to celebrate their imaginary origin from the tradition of cathedral builder huts.

Roger Odd, the vice grandmaster of the province of Kent of the united Grand Lodge: “Several Archbishops of Canterbury were Freemasons, including Geoffrey Fisher, who crowned our Queen.”

The Anglican primate Geoffrey Fisher was received on 2 December 1960 by Pope John XXIII (freemason). He was received in the Vatican when, after more than 400 years of the “Ice Ageˮ, he started an approach between Catholics and Anglicans.

On 26 February 2017, Pope Francis visited the Anglican church and community in Rome. On March 13, an Anglican liturgy took place for the first time in the history of St. Peter’s Basilica. Pope Francis allowed part of the hour prayer to be celebrated in the Anglican rite. The occasion was the 50th anniversary of the Catholic-Anglican dialogue.

In front of 4.000 believers, Cardinal Nichols, took the renewed consecration of England and Wales to the Immaculate Heart of Mary at the same time as the Freemasons celebrated in Canterbury.

However, as the former 32-degree freemason John Salza declares: “No one can be a Christian and a Freemason at the same time – for Freemasonry is luciferic.ˮ

Archbishop Cranmer (a blogger pseudonym) brought the liturgy of the 18 Febr. Service at the Canterbury Cathedral: All nicely Anglican and Christian – no pageantry.

Archbishop Cranmer analyzed the Biblical texts and pointed out they refer to the first Masons: King Solomon, King Huram of Tyre and Hiram Abiff, the constructor pf Solomon’s temple.

We can’t know what the Dean said in his sermon but, on the face of it, this is a wholesome Anglican service of orthodox Christian liturgy.

But here’s the interesting thing.

The scriptures chosen have greater significance (and a very different meaning) to Freemasons than they have to Christians. Indeed, they are used at the highest degree of Masonic initiation in their rituals of exaltation.

Note the reference to the north-side of Sion, which is the dwelling place of God (cf Ezekiel 1:4; Isa 14:12-14). According to William Schnoebelen (Masonry: Beyond the Light) the North side of a Grand Lodge is the place of darkness, or “benightedness and ignorance“. It is whence a new recruit enters (see Masonic Temple layout), blindfolded.

The second section of the University of Bradford’s Web of Hiram (cf 2Chron 2:1-9) observes that he is introduced as one who is in darkness.

The candiate for initiation is perambulated in a clockwise direction around the Temple, from the darkness of the North toward the light. The psalmist’s “Walk about Sionˮ is linked to this rotation. Thus is the north-side, the city of the great King, presented as the place of darkness, from which the candidate moves toward true enlightenment about the nature of the “Almighty Father and Supreme Governor of the Universe” (Lucifer).

In 2003, 8% Danish vicars were Masons – probably much more today.
But Freemasons or not, many are spreading Luther’s false doctrine that the baptism certificate is an universal indulgence, according to which the commandments of Christ could be ignored.