The Elephant In The Sky: Chemtrails, Contrails And Climate Engineering 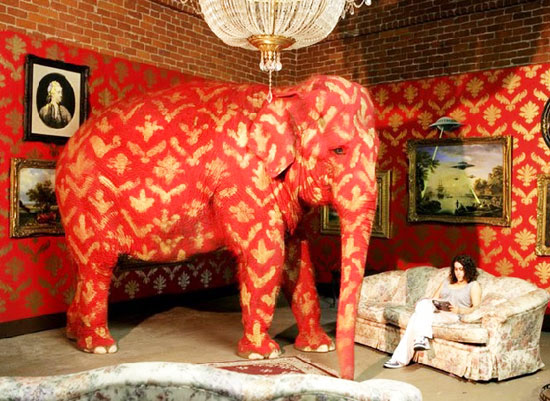 The Elephant in the Room: An important, serious and obvious topic, which everyone is aware of, but which nobody wants to discuss, as such discussion is considered to be uncomfortable – or would cause cognitive dissonance (the psychological distress felt when a person is presented with a truth that contradicts a previously deeply held belief).

The Emperor Has No Clothes: an expression that is often used to describe a situation in which people, afraid of being an outlier, are afraid to speak up about something obvious that their eyes or logic are telling them to be true – even if everybody around them is afraid to say anything. The expression comes from a fairy tale from Hans Christian Anderson that was titled The Emperor’s New Clothes.

If You See Something, Say Something: An official Department of Homeland Security effort, post-9/11, to get citizens to notify authorities if something suspicious is seen or heard.

Climate engineering, commonly referred to as geoengineering, is the “deliberate and large-scale intervention in the Earth’s climatic system with the aim of affecting adverse global warming.” (One example of climate engineering is the project called SPICE (Stratospheric Particle Injection for Climate Engineering – http://www.spice.ac.uk/project/about-the-project/) which is “investigating the feasibility of putting particles into the stratosphere in order to affect global temperatures.” In 2009, SPICE determined that “aerosols injected into the Stratosphere is the Solar Radiation Management technique which has been identified as potentially the most affordable and effective option for reducing (solar) radiation.”

Quotes:
“It is difficult to get a man to understand something, when his salary depends upon his not understanding it!” Upton Sinclair, anti-fascist, anti-imperialist American author (1935)

“We are apt to shut our eyes against a painful truth …For my part, whatever anguish of spirit it might cost, I am willing to know the whole truth; to know the worst, and to provide for it.” Patrick Henry (1775)

“If you love wealth better than liberty, the tranquility of servitude better than the animating contest of freedom, go home from us in peace. We ask not your counsel or your arms. Crouch down and lick the hands which feed you. May your chains set lightly upon you, and may posterity forget that you ever were our countrymen.” Samuel Adams (1776)

“You may choose to look the other way, but you can never say again that you did not know.” William Wilberforce (1791)

“It is a common sentence that Knowledge is power; but who hath duly Considered or set forth the power of Ignorance? Knowledge slowly builds up what Ignorance in an hour pulls down.” George Eliot, Daniel Deronda (1876)

“In a time of universal deceit, telling the truth is a revolutionary act… The further a society drifts from the truth, the more it will hate those that speak it.” George Orwell (1939)

One of the most concise summaries concerning the secretive, experimental operations that are being conducted in the earth’s atmosphere (in order to modify the weather) by America’s military-industrial complex and their nation’s allies around the world, can be found here. It is a 15 minute youtube video produced by Dane Wigington of GeoEngineeringWatch.

Our duty as citizens is to be well-informed about serious threats to our nation and the planet, even if the powers-that-be wish us not to be. There are many emperors without clothes out there – especially in arenas of power and wealth – that need their comeuppance.

Wigington has been courageously trying to expose the evils of the secret, unacknowledged operation that is spraying aerosolized substances from military jets for decades now. (The spray contains mostly nanoparticulate metals, including the known neurotoxins aluminum, barium and strontium.)

Wigington also offers one of the best weekly commentaries on the survivability of the planet and its creatures. His very informative website is at www.geoengineeringwatch.org, and one of his analysis is here.

Please take the time to watch these video presentations and read the scientific data on the website. And then study the many chemtrail images that anyone who has occasionally looked up at the sky over Duluth has seen over the past several decades – often without any awareness that what they are seeing are not normal clouds.

Your children, your neighbor’s children, your pets and the other doomed creatures of Planet Earth will thank you for paying attention – but only if you then do something with the information.

Wigington does deep, undeniable, science-based analyses of the serious realities of global warming, corporate fraud, political fraud, Big Pharma (including Big Vaccine) fraud, the Pentagon’s perpetual war agenda and other de-stabilizing agendas supporting the American Empire – which all somehow enrich the activities of the 1% elites and their corporations.

After being outed of their nefarious exploitation of the planet, they can be expected to accuse the truth-tellers of being conspiracy theorists. But what is being exposed is conspiracy “fact”, not just theory. 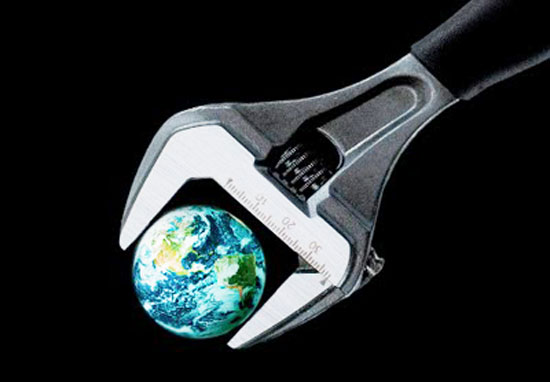 GeoEngineeringWatch.org tells us the unwelcome – but vitally important – realities that are being denied daily by the major media and therefore are not reported there, even by otherwise-trusted talking heads whose corporate sponsors orchestrate what gets reported, revealed and debated.

Sadly, every journalist that seemed sincere (even some of the reporters on PBS, NPR, MPR and WPR, who seem to be otherwise doing a good job) apparently are going along for the ride.

Geoengineering Watch does not sugar-coat the information as is done by the many biased entities that temporarily profit from the crises which their paymasters are actually orchestrating.

Wigington articulates the truth about many hidden agendas, not just about the geoengineering ones that are so obvious, which have been kept from Americans for decades. The elected officials have let Americans down, only partly because most of them have arisen from an era and a culture that was kept in the dark about national security issues by secretive agencies like the NSA, the CIA, the FBI, the CDC, the FDA, every for-profit corporation and whomever are the powers that control the news.

So the poor American (or co-opted?) lawmakers are just as ignorant about many things as the voters are, and that includes geoengineering and the dangers of Big Pharma’s and the CDC’s over-vaccination schedules for innocent children and vulnerable adults. And when it comes to unbiased (ie, non-corporate) science and history, most politicians are as historically illiterate and as scientifically dis-informed as those of us who put them into office.

Plus, since politicians are also too easily corrupted by campaign bribes and the desire for fame, celebrity and wealth, they are very likely to be silent about (or perhaps studiously ignorant of) about these two threats to the planet: 1) the Pentagon’s military destabilization agendas for most of the rest of the world and 2) the federal government’s role (CDC, FDA, NIH, etc) in ensuring maximum profits for Big Pharma, Big Vaccine and Big Medicine through the trade associations and lobbying groups like the AMA, AAP, APA, AAFP and even the OB/GYN trade association.

Politicians are just as vulnerable as average Americans are, as corporations dumb them down and get them to accept the propaganda that masquerades as unbiased science.

What is even more dangerous is the fact that Big Pharma’s sales staffs have been able to bamboozle us physicians by subtly bribing Americans with pens, pizzas and post-it notes if we just listen to their pitch about the obscenely-priced drug for the most recently propagandized “disorder” (that often was actually invented by the drug industry rather than the medical community)!

The Connections Between Chemtrails and Vaccines

Of course American patients have also been “primed” and propagandized with pro-drug information about health and wellness because of what they see on TV with attractive professional actors pretending to be believable patients.

Metal neurotoxicity is additive, accumulative and, what is worse, synergistic with other toxins; so if a child (or the fetus’s pregnant mother) is being injected with the standard cocktail of vaccines, inhaled or swallowed chemtrail toxins can be predicted to worsen any toxicity brought about by the shots.

As a matter of fact, many of these naysayers will try to demonize or discredit Wigington and his audience, so be aware if you attempt to alert your congresspersons and your media talking heads about the rapidly on-rushing dangers to the planet’s animal and plant life – dangers that are being perpetrated by various unelected corporate entities that have achieved unjust power over Americans – and are planning to profit financially as well.

How Corporations Can Profit From Crises

Here are two examples of how corporations can profit from crises (artificial or natural):

The CDC already makes money off of every Gardasil shot given in the US and even holds patents on the Zika virus, probably the reason why they lobbied so hard to “prove” that Zika, rather that the TDaP vaccine and other toxic pesticide exposures to pregnant women in Brazil, caused the microcephaly outbreak in 2015.

Remember, the future of every living thing on the planet (not just its creatures, but also its air, water and soil) may depend on everybody’s duty to warn others about oncoming dangers that most folks are not seeing.

Real scientists, it should be emphasized, and truly honorable politicians and journalists are the ones who should be willing to ask questions and study the unbiased evidence wherever it leads them. And then, as Wigington has been doing for over a decade, discuss the evidence in public. Wigington has been doing this despite being black-balled by the major media, Big Business and the federal government.

The Science of Chemtrails and Contrails 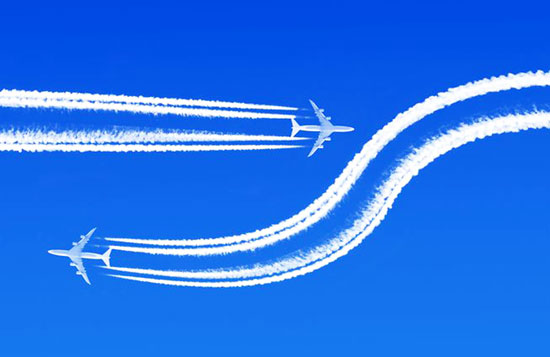 Chemtrails are those long-lasting white fluffy aerosolized jet trails that are being sprayed by military jets. But it is not happening every day, a clue that should make any thinking person realize that something different is happening.

Chemtrails gradually diffuse into a long-lasting cloud-like haze, that apparently are designed to blunt the sun’s heat rays. Chemical analyses of chemtrails have revealed aluminum, barium and strontium, in addition to other substances. Chemical sprays are visible at any altitude, whereas contrails only appear at very high altitudes, requiring very low temperatures to become visible.

Contrail is short for “condensation” trail, the term often used by disinformation agents to confuse the public as they point to actual photos of chemtrails. These disinformation agents are trying to obscure what are actually very toxic chemical spray materials rather than frozen water vapor.

Curious citizens should become knowledgeable about the science of normal contrails as should real scientists. If they study unbiased sources of information (not Wikipedia, Snopes or paid trolls, when it comes to issues that are taboo subjects for Big Media and national security agencies) they will discover that contrails are only rarely observed from ground level since they only show up where the temperature is frigid enough to instantaneously freeze the water vapor that always comes from jet fuel combustion.

Contrails are generally invisible, because the ice crystals evaporate so rapidly. So if one sees long-lasting trails behind any jet plane, the trails are not coming from the jet engines, but rather from spray nozzles designed to “seed” the atmosphere with substances that nobody is talking about. Wigington’s very informative website answers all the questions about this widely covered-up reality.

One might also ask why nobody in your neighborhood or among your in-laws is seeing or wondering about the dozens of chemtrail images that are regularly appearing in the sky above virtually every nation allied with the US, where commercial jets are flying every day of the year and never show chemtrails.