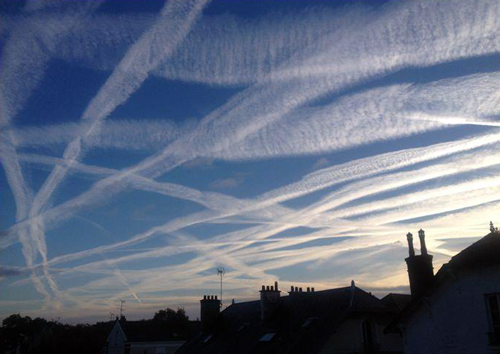 Never in the history of the World has anyone seen – and experienced – such a pervasive and ongoing chemical assault on the citizenry in broad daylight. Especially an assault that goes unseen and, therefore, unreported by the great majority of people who live under chemtrailed skies. These folks are by and large completely unaware that their skies are literally being saturated, sometimes 24/7, with chemtrail chemicals.

How is it that these chemicals being spewed by airliners, which are equipped to lay down such aerosolized chemical cocktails, go undetected by so many?
There can be only one answer. Our governments have willfully engaged in a premeditated conspiracy to deceive the public. This conspiracy to both deceive and spray chemicals anywhere they wish has been going on for decades. Yet they continue to assert that the chemtrails which many of us have witnessed and experienced are actually contrails.

What follows are a few photos, which clearly show how the equipment which produces these aerosols can start and stop the spraying process. Upon seeing these many chemtrails being laid down in real time, it is obvious to anyone who can see that they are in fact chemtrails… and positively not contrails. Contrails are the normal vapor trails which are left in the wake of a sky borne jet airliner. They appear at the very rear being ejected as the exhaust from the jet airliners, and dissipate quite quickly depending on the ambient atmospheric temperature, pressure and humidity at the time.

Photos of Chemtrails which cannot be Contrails 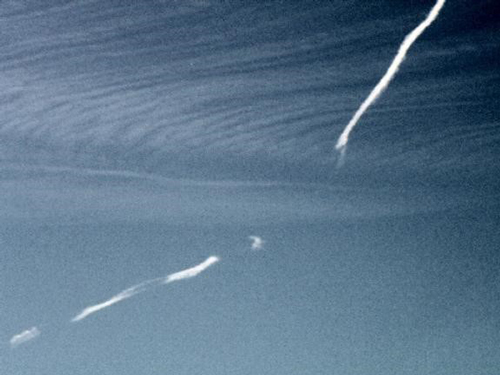 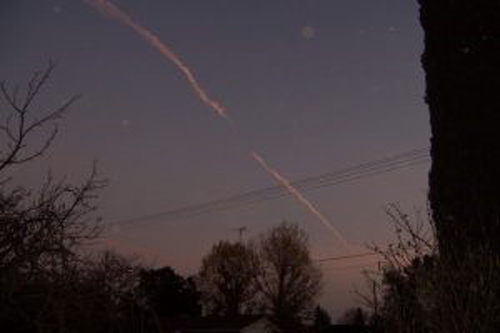 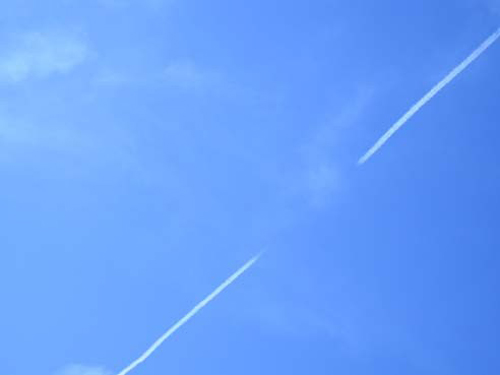 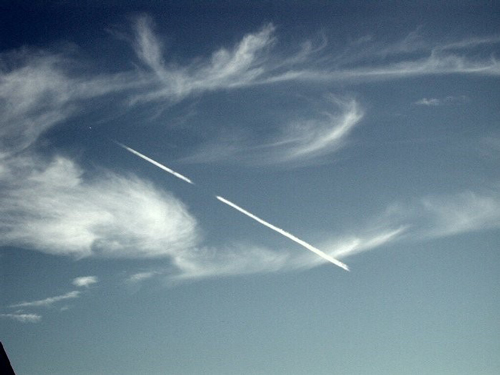 Hopefully you get the picture by now. If not, here is a much more exhaustive photo-documentary for your viewing. These photos categorically portray the chemtrails being started and stopped at the will of the chemtrail aerosolization equipment operator. In other words, there is no room for debate here: Chemtrails are not contrails, and contrails are not chemtrails. The preceding photos ought to serve as irrefutable evidence for anyone who is confronted with the skepticism or disbelief from those who rarely look at the sky.

This Government-Run Chemtrail Conspiracy Has At Least Three Prongs

The first prong has been to knowingly disseminate false information about the multi-decade, government-coordinated, chemtrail program. Calling what are actually chemtrails contrails is a stratagem the government has used with great success for all of those decades. Except that now many are waking up to the truth and calling them on it whenever and wherever possible.

On those rare occasions where they trot out a willing dupe to purposefully misrepresent chemtrails as contrails, they often fall down on the job. Nevertheless, the government has so committed itself to this highly flawed strategy for so many years that they refuse to give it up. Their untenable approach is now beginning to work in the favor of those who are working to expose this relentless chemical assault against the populace.

The second prong of the government’s stratagem is to selectively spray uniquely formulated chemtrail aerosols in different areas, at different altitudes, during specific weather patterns, etc. For instance, we often see them heavily spray the skies one or two days before a predicted rainfall, thunderstorm, snowfall, hailstorm or any other type of precipitation event. This is without question the chemtrail program’s most predictable feature. When a major weather event is forecasted, the government’s chemtrail airliners are up there creating tic-tac-toe boards in the sky like at no other time.

This begs the following question: What on earth are they putting in those chemtrail brews that they are so deliberate to rain upon the masses?
After all, the heavy precipitation events particularly ensures that the many aerosolized chemicals end up on lakes and rivers, farmland and forests, homes and offices, roads and sidewalks, malls and shopping centers, cars and trucks, etc. Just in case the reader has any health concerns or medical conditions which might be caused, or exacerbated, by the toxic chemicals present in chemtrails, here is a real eye-opener.

The third prong of this ubiquitous and unrelenting government chemtrail conspiracy is weather modification. All one has to do is closely watch the unpredictable and uncooperative weather of California, for example, to get an appreciation of how profoundly geo-engineering has altered the long-established climatological patterns there. The state has been besieged by what may be its worst drought in recorded history.

The governments have been deceiving the citizenry for many decades regarding the geo-engineering chemical assault known as chemtrails. Not only they continued down this road of deception, they have ramped up their many and varied initiatives to ensure that the chemtrail genie does not escape from the bottle. Once it does, they know that it cannot be put back into the bottle… and that there will be many unhappy people as a result.

For the untold millions who have been systematically sickened by the covert chemtrail program, they will have their day of revelation and justice. Those who directly participated in this chemical assault on the entire planet will likewise face the appropriate consequences. It is now only a matter of time that both this crime against humanity and the subsequent cover-up will be exposed.

May those who are responsible for this crime against humanity be forewarned! The people of the world don’t like having their sunny days taken from them. Neither do they like being sprayed from on high with toxic and dangerous chemicals.