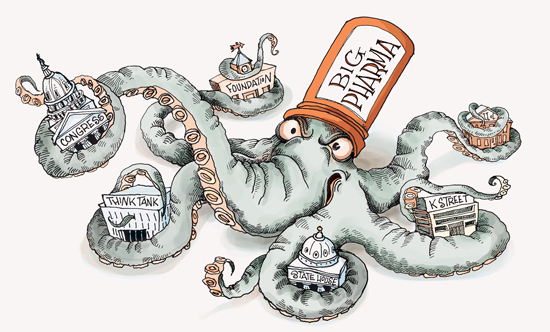 Many were becoming increasingly wise to the shady operations of the Rockefellers and Carnegies and the collusion between their various foundations.

According to the same article by Gary Allen, “The first of the Congressional Committees to attempt such an investigation was the Cox Committee, created in 1952 under the leadership of Congressman Eugene E. Cox, a Democrat from Georgia. Warren Weaver notes in U. S. Philanthropic Foundations that the official purpose of this Committee was to determine ‘which foundations and organizations are using their resources for purposes other than the purposes for which they were established, and especially to determine which such foundations and organizations are using their resources for un-American and subversive activities or for purposes not in the interest or tradition of the United States’. Liberal Democrats in control of Congress first delayed the appropriation of funds for the Cox Committee, then gave it only six months to conclude an investigation that would properly require several years.”

The Flexner Report of 1910 and the War on Holistic Health

Rockefeller threw the weight of his various foundations and their grants about in a pursuit to standardize medicine. Beginning with university doctoral curriculums right straight through to hospital care, medicine was to be uniform and preapproved. The preexisting American Medical Association, which had been birthed in 1847, was then weaponized and granted exclusive regulatory power of the issuance of doctoral licenses and the certification process of schools that either met or failed to meet the new national standard.

According to SueYoungHistories.com, “Abraham Flexner, the owner of a bankrupt prep school, had the good fortune to have a brother, Simon, who was director of the Rockefeller Institute for Medical Research. At his brother’s suggestion, Abraham Flexner was hired by the Rockefeller-allied Carnegie Foundation so that the report would not be seen as a Rockefeller initiative. And Andrew Carnegie, whose main goal was to ‘rationalize’ higher education, that is, replace religion with science, saw the American Medical Association cartelization drive as useful.

Claiming to have investigated nearly every school in the country, Flexner rated them on suitability. Schools he praised received lush grants from the Rockefeller and associated foundations, and almost all the medical schools he condemned were shut down, especially the ‘commercial’ institutions.
AMA-dominated state medical boards ruled that in order to practice medicine, a doctor had to graduate from an approved school. Post-Flexner, a school could not be approved if it taught alternative therapies, didn’t restrict the number of students, or made profits based on student fees.”

To recap, we have just looked at evidence connecting three brothers within the Flexner family directly to John Rockefeller and Andrew Carnegie, who themselves were conspiring to push medicine towards allopathy through a conjoined effort using their respective foundations. Abraham Flexner compiled the Flexner Report for the Carnegie Foundation while his brother Simon was director of the Rockefeller Institute for Medical Research. 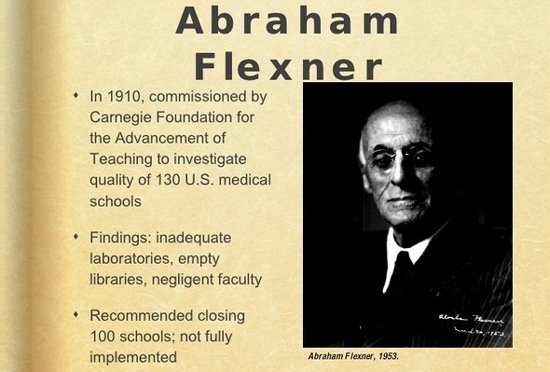 According to page 22 of the Flexner Report of 1910, which went by the official name Medical Education in the United States and Canada: “The privileges of the medical school can no longer be open to casual strollers from the highway. It is necessary to install a doorkeeper who will, by critical scrutiny, ascertain the fitness of the applicant, a necessity suggested, in the first place, but consideration for the candidate, whose time and talents will serve him better in some other vocation, if he be unfit for this, and in the second, by consideration for a public entitled to protection from those whom the very boldness of modern medical strategy equips with instruments that, tremendously effective for good when rightly used, are all the more terrible for harm if ignorantly or incompetently employed.”

What followed was a systematic debunking campaign on the part of the AMA which used coercion and propaganda to displace all medical schools teaching anything other than allopathy including – but not limited to – Ayurvedic medicine, Chinese medicine, homeopathy, naturopathy, chiropractic, acupuncture, and other traditional forms of therapy. Conventional medicine of the era was then arbitrarily relabeled as alternative medicine and allopathic medicine began to be referred to as conventional medicine.

The Flexner Report declared that any discussion of patients who had successfully “healed” from alternative medicine was anecdotal and those patients probably dodged a bullet by not using allopathic treatment. This is tantamount to trying to prove a negative. It is tacitly asserted on page 17 of the report that fewer doctors are needed to better control the medical system and phase out undesirable information by creating an exclusive club.

“It appears, then, that the country needs fewer and better doctors; and that the way to get them better is to produce fewer. To support all or most present schools at the higher level would be wasteful, even if it were not impracticable; for they cannot be manned. Someday, doubtless, posterity may reestablish a school in some place where a struggling enterprise ought now to be discontinued. Towards that remote contingency nothing will, however, be gained by prolonging the life of the existent institution.”

Abraham Flexner not only worked directly for Carnegie, he also later worked directly for Rockefeller. According to Philanthropy Roundtable, “The Rockefeller Foundation hired Flexner in 1913 to advise its General Education Board. The foundation then systematically funded reforms at several medical schools, including Washington University at St. Louis, Yale University, the University of Chicago, and Vanderbilt University. In 1923, the Rockefeller Foundation gave additional money to reform public medical schools in Iowa, Colorado, Oregon, Virginia, and Georgia. These efforts established a single high standard for medical education in the United States, and launched American medicine to international prominence, a prestige it continues to possess today.”

Granting Regulatory Powers to the State

Much like the Federal Reserve, the American Medical Association is a private institution comprised of medical “professionals”. Theoretically, if it were not for the revolving door for Congressional members to step into cushy jobs, the AMA should remain an impartial body capable of genuine regulation. The Carnegie Foundation shows its hand on page 19 of the Flexner Report where the transference of regulatory power from the AMA to the state is called for.

“The overwhelming importance of preventative medicine, sanitation, and public health indicates that in modern life the medical profession is an organ differentiated by society for its own highest purposes, not a business to be exploited by individuals according to their own fancy. There would be no vigorous campaigns led by aware practitioners against tuberculosis, malaria, and diphtheria, if the commercial point of view were tolerable in practice. And if not in practice, then not in education. The theory of state regulation covers that point. In the act of granting the right to confer degrees, the state vouches for them; through protective boards it still further seeks to safeguard the people.”

Talismanic phrases like “safeguard the people”, “public safety” and “greater good” are often red flags that should give the reader pause. Of course, any sane person wants public safety, but sophistry in this arena typically uses the aforementioned talismanic language to collectivize the masses to support a misanthropic agenda. It is often the preamble for the roll out of a Hegelian bait and switch.

The American Medical Association Funded by the Rockefellers and Carnegies 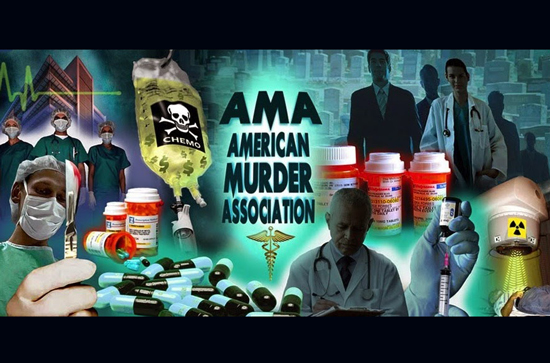 The American Medical Association was founded in 1847 and incorporated half a century later in 1897. It has been accepting money from the Rockefeller and Carnegie Foundations from as early as 1910, the same year that Carnegie issued the Flexner Report.

In his book The World Without Cancer, G. Edward Griffin makes the argument that the Rockefeller and Carnegie Foundations began to support the AMA in an effort to control the medical schooling establishment and to gain power over this “large and vital sphere of American life”.

“The Rockefeller Foundation now has available such a laboratory at the Rockefeller Institute for Medical Research, which has placed adequate space at the disposal of the Foundation in one of its buildings. This laboratory, in which a successful method of vaccination against yellow fever has been devised and many other problems with regard to this disease have been cleared up, is now the backbone of all Foundation work against yellow fever. Work in this laboratory on research problems in other diseases, especially malaria, is under consideration.”

In 1963, the World Health Organization in concert with the Food and Agriculture Organization of the United Nations held its first meeting on Codex Alimentarius, a complex rubric of codes and standards by which food can be sold internationally. Its headquarters is in Geneva, Switzerland.

According to the FAO’s official website, “The Codex Alimentarius international food standards, guidelines and code of practice contribute to the safety, quality and fairness of this international food trade. Consumers can trust the safety and quality of the food products they buy and importers can trust that the food they ordered will be in accordance with their specifications.
While being recommendations for voluntary application by members, Codex standards serve in many cases as a basis for national legislation.”

In short, Codex Alimentarius is a push for the centralized global control over our food supply and the vitamin industry with standards set by politicians at the United Nations.
In an October 2006 article published by Paul Taylor entitled Codex: What is it and How Does it Affect You and Your Health?, he summarizes: “Codex is not an easy subject to get to grips with. With over 20 committees meeting on an annual basis, and published reports comprising a total of over 1,400 pages in 2005 alone, most people are blissfully unaware of the extent to which its activities affect their health.

At the time of writing, the Commission presides over a total of 27 active subsidiary committees and ad hoc intergovernmental task forces, the main functions of which revolve around the drafting of standards, guidelines and other related texts for foods, including food supplements.

Significantly, therefore, and as we shall see below, in all of these areas the evidence is now inescapable that Codex is increasingly putting economic interests – and particularly those of the pharmaceutical and chemical industries – before human health.”