„The content of the following article gives the impression that the Rothschild bloodline is the wealthiest and most powerful family on Earth. The wealthiest and most powerful families on Earth are the people who hide in the shadows. In this lifetime, the chance of you hearing their names is near zero percent. You have a better chance of winner a million dollar lottery jackpot than hearing or seeing their names on the news or internet.” – Pao Chang 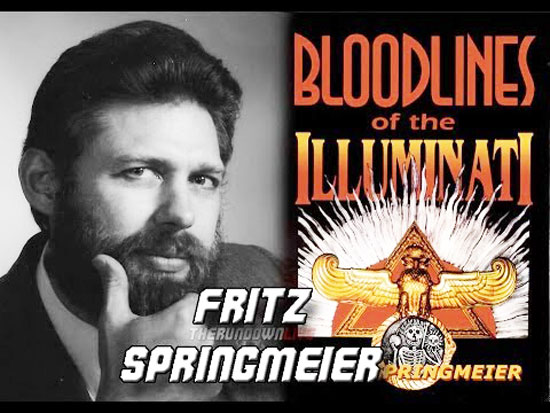 Two neighbor horse farmers came together one day to talk business. The first farmer sold his horse to the second for a quarter million dollars, and then bought it back for about $20 more. He could now advertise his horse (actually worth $20), as a horse he that he had paid over a quarter of a million dollars for.

We can laugh over such schemes. And perhaps we should laugh at ourselves for having been fooled, for if there is one area in life that exceeds the religious in deception, and touches all of us it is the financial.

What else can we do about it except laugh? The famous poet Lord Byron describes the archetype of our two farmers in 1823, „Who keeps the world, both old and new, in pain or pleasure? Who makes politics run glibber all? The shade of Bonaparte’s noble daring?”

Jew Rothschild and his fellow-Christian, Baring. You’ll learn about some other ,,neighbor horse traders” in this chapter too.

Rothschild Talks About Their Dynasty

Lord Rothschild in his book The Shadow of a Great Man quotes a letter sent from Davidson on June 24, 1814 to Nathan Rothschild:

“As long as a house is like yours, and as long as you work together with your brothers, not a house in the world will be able to compete with you, to cause you harm or to take advantage of you, for together you can undertake and perform more than any house in the world.”

The closeness of the Rothschild brothers is seen in a letter from Saloman (Salmon) Rothschild to his brother Nathan on Feb. 28, 1815, “We are like the mechanism of a watch: each part is essential”.
This closeness is further seen in that of the 18 marriages made by Mayer Amschel Rothschild’s grandchildren 16 were contracted between first cousins.

Visiting the Nation the Rothschilds Built

In 1974, in the summer after the Yom Kippur War this Author [Fritz Springmeier, ed.] toured Israel, and got the chance to personally visit many of the buildings like the Knesset that the Rothschild’s money has built.

The Knesset is the Israeli equivalent to the US Congress’s Capitol building. One of the Rothschilds in his will left money for ongoing building projects in Israel, and the Rothschilds are honored with a Street named after them in Jerusalem.

The people of Germany and Turkey have been very close. We can recall meeting Turkish “Gastarbeiter” (guestworkers) in Germany. The reader will remember that Turkey fought on Germany’s side in W.W. I. A few powerful Jews, including the Rothschilds were responsible for the wording of the Treaty imposed on Germany that ended W.W. I. The treaty gave the Rothschilds the German owned railway rights in Palestine (which had been part of the Turkish Ottoman Empire), thus paving the way for the Rothschilds to have a sure leverage to dictate policy concerning Palestine.

The Rothchilds as Prophets

One item stands out as a person listens to the International Bankers and reads their books. They believe money is what makes the world go round. If you have money, you can do anything. Money is “God”, and it is worshipped and served. Even after these families accumulate more than can be spent, these devotees continue selling their souls for this false but powerful god.

The great poet-philosopher Heinrich Heine (a Banker’s son) said, “Money is the god of our time, and Rothschild is his prophet.” Following the cue of the Rothschilds, Heinrich Heine, a Jew, signed his name by drawing a Seal of Solomon.

Amsel Rothschild is reported to have said, “Give me control of the economics of a country; and I care not who makes her laws”. Today his descendants meet twice daily in London to dictate to the world what the world price of gold will be. They also dictate what the “Federal Reserve System” will do with America’s finances.

According to eye-witnesses, who were prominent enough to visit one of the British Rothschild homes, the Rothschilds worship yet another god too, Satan. They set a place for him at their table. The Rothschilds have been Satanists for many generations.

Throughout the Middle Ages the Seal of Solomon had been used by Arab Magicians, Cabalist Magicians, Druid witches. One of the few ancient uses of the symbol was on the floor of a 1,200 year old Moslem Mosque found where Tel Aviv is today.

In the twelve century an Ashkenazic Jew Menahem ben Duji, who thought he was the Messiah, used the magical symbol. The Rothschilds adopted this powerful magic symbol in 1822 for their coat-of-arms.

The name they adopted for their family actually comes from the fact that in the 17th century Mayer Amschel Bauer began hanging out a red hexagram in front of their house to identify it. Mayer Amschel then decided to take the name red-schield (Rothschild in German) after the red Seal of Solomon that they used.

Alice Bailey in A Treatise On White Magic, p. 412, claims that the Hierarchy has a special group which she calls “the financial group, controlling all that can be converted into energy, and constituting a dictatorship over all modes of intercourse, commerce and exchange.”

According to Alice Bailey, the “financial group” is the latest group directed by the Hierarchy. In 1836 Zevi Hirsch Kalischer approached Rothschild and proposed Rothschild buy all of Erez Israel. It took many years for the Rothschilds to finally create Israel.

The Rothschilds have been a primary force behind the creation of Israel, and so it is appropriate that the nation carries their magical Seal of Solomon as the state logo.

The Ultra-orthodox Jews in Israel will not serve in the Israeli army because they know that Almighty God was not behind the creation of modern Israel, but rather the rich ungodly apostate Jews. They refuse to serve the ungodly. They are more wiser than men like Jerry Falwell who run around proclaiming Israel is God’s nation. Men like Falwell are the type that this Author [Fritz Springmeier, ed.] finds reference to repeatedly in Jewish documents that speak of their power within the Fundamentalists. God is ultimately in charge, he has allowed Hitler to come to power, Stalin to come to power, and the Rothschilds to come to power. In the same sense that God rules over and blessed Stalin’s Russia, he rules over America and Israel. To twist scriptures about God seating the rulers and then to apply them to bless one Satanic secular communist nation and not another is inconsistent and not correctly using the Word of Truth. Some people object that the conspiracy of Power is labelled Jewish rather than Satanic by certain concerned citizens.

This objection is valid – however, will these objectors then take the obvious next step and admit the nation of Israel which the Rothschild’s created is Satanic and not Jewish? But then who knows precisely why people do what they do? If you ask someone why he does something, he will give you one answer today, another tomorrow, and another the next day. Does he do what he does for a real reason, or a single motive? Perhaps to label the Power as only Satanic or only Jewish or only Masonic is to neglect the personal human dimension. This personal human dimension is godless. Being godless it fills that void, by pretending its men are gods. This brings us right back to the Gnostic religions and Satan.

King David did not have anything to do with the hexagram, although his son Solomon did when he began worshipping Ashtoreth (star, also known as Astarte, Chiun, Kaiwan, Remphan, and Saturn). Solomon built altars to Star (Astarte, aka Ashtoreth).

The god Saturn is associated with the Star but both Saturn and Astarte also been identified with a number of other names. Saturn is an important key to understanding the long heritage this conspiracy has back to antiquity. The city of Rome was originally known as Saturnia or City of Saturn. The Roman Catholic church retains much of the Saturn worship in its ritual. Saturn also relates to Lucifer. In various occult dictionaries Saturn is associated with evil. Saturn was important to the religion of Mithra, and also the Druids.

Co-Masters of the World: Connections to Jehovah Witnesses, Mormons and Judaism 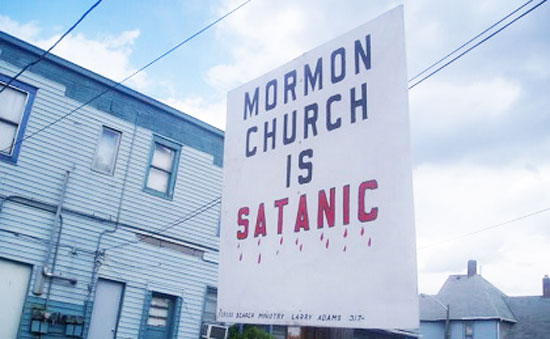 It has been said all roads lead to Rome. For this book, it could be said all paths of investigation lead to the Rothschilds. Charles T. Russell, in a 1891 letter to Baron (Lord) Rothschild, mailed from Palestine, outlined possible courses of action that could be taken to establish the Jews in Palestine.

Russell’s letters praised the Rothschild’s money which established Jewish colonies in Palestine. Russell writes Rothschild: “What is needed here, therefore, next to water and cleanliness, is a good government which will protect the poor from the ravenous and the wealthy. Banking institutions on sound bases, and doing business honorably, are also greatly needed.” Russell continues: “May the God of Jacob direct you, my dear Sir, and all interested with you in the deliverance and prosperity of Israel, and blessed will they be who, to any extent, yield themselves as his servants in fulfilling his will as predicted.”

When the Mormon Church needed financing in the late 19th century, they went to Kuhn, Loeb Co. To explain the Rothschild’s control of Kuhn, Loeb Co. here is some background information.

Jacob Schiff grew up in the house that the Rothschild’s had at 148 Judengasse, Frankfurt. Jacob Schiff came to the United States with Rothschild capital and took over control of a small jewish banking concern founded by two Cincinnati dry goods merchants Abraham Kuhn and Solomon Loeb. He even married Soloman’s daughter. In 1885, Loeb retired, and Schiff ran the Kuhn, Loeb Co. for the Rothschilds until 1920 when he died. During Russell’s and Brigham Young’s day, Lord Rothschild was considered the “lay leader of world Jewry.”

Edmund Rothschild was President of the Jewish Colonization Assoc, which was a major Zionist group. Amselm Rothschild indicated that his grandfather Amschel Mayer Rothschild had insisted in Clause 15 of his will to his children, “may they and their descendants remain constantly true to their ancestral Jewish faith.” However, the will has been secret and there is no way of knowing what it says.

The Rothschilds have not remained true to the Orthodox faith. If this was actually what Clause 15 said then something is amiss. The Jewish world has showered the Rothschilds with praises:  “The Rothschilds govern a Christian world. Not a cabinet moves without their advice. They stretch their hand, with equal ease, from Petersburg to Vienna, from Vienna to Paris, from Paris to London, from London to Washington. Baron Rothschild, the head of the house, is the true king of Judah, the prince of the captivity, the Messiah so long looked for by this extraordinary people… The lion of the tribe of Judah, Baron Rothschild, possesses more real force than David–more wisdom than Solomon.”

For those who admire stinginess, the Rothschilds will be greatly looked up to. For instance, the extent of James Rothschild’s charity in France to poor Jews was 5 francs (the equivalent of $1). Their dynasty has destroyed honest Jews along with Christians. Today, few dares criticize the Rothschilds.