Many divisions and battles between religious elements in the world have been encouraged and supported by the Power’s wealth. Unfortunately, many have been fooled into thinking that being devout and faithful to God is the source of religious fighting. In some areas of the world, Moslems, Christians, and others have gotten along fine for centuries. Religious tensions do spring to some degree from within the religions themselves, but the fuel to keep those fires burning and to light up conflicts often come from the Power’s wealth. An obvious example is the Iran-Iraq war. 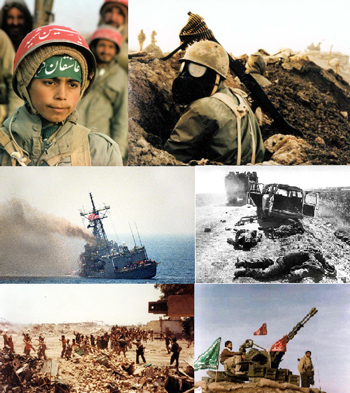 Co-Masters of the World: Control Over WWI Treaty

Victor Rothschild, who worked for J.P. Morgan & Co., and was an important part of MI5 (British Intelligence). Victor Rothschild was also a communist and member of the Apostles Club at Cambridge.

Lord Rothschild was one of the original members of Rhode’s Round Table group which developed into the CFR. It was the Rothschilds who had financed Cecil Rhodes, beginning in Africa.

The Rothschilds’ have several agents which their money got started and who still serve them well, the Morgans and the Rockefellers. The Rockefellers were Marrano Jews. The original Rockefeller made his money selling narcotics, (they weren’t illegal then).

After acquiring a little capital he branched out in oil. But it was the Rothschild capital that made the Rockefeller’s so powerful. “They also financed the activities of Edward Harriman (railroads) and Andrew Carnegie Steel.”

Co-Masters of the World: Power Within Christendom

The Rothschilds also wielded much influence and power not only in Secret Societies, but also in Christendom’s churches. The Salvation Army under the suggestion of the Rothschilds adopted the Red Shield (Roth-red Schild-shield) for their logo.

One history of the Rothschilds remarks:
“The Rothschilds had rapidly propelled themselves into a position of immense financial power and political influence. They were an independent force in the life of Europe, accountable to no one and, to a large extent, reliant on no one. Popular lampoons depicted them as the real rulers of Christendom…”

Some of the Rothschilds have been involved in the campaign to loosen public morals. The first executive Secretary of the National Student Forum was John Rothschild. This National Student Forum changed its name like articles of clothing. Speaking about clothing, one of the aims of this Socialist group was to promote public nudity, and free love. This organization had the following constituent groups “Radcliffe Liberal Club, Union Theological Seminary Contemporary Club, Yale Liberal Club” to name just a few.

A further development of this was the Youth Peace Federation which consisted of the League of Youth of Community Church, Methodist Epworth League, NY District, Young Judea, and Young People’s Fellowship of St. Phillip’s Parish to name a few. American religious men have ties to the Rothschilds especially through their various agents.

Remember John Foster Dulles was an important Federal Council of Churches of Christ official. Every road leads back to the Rothschilds. There are more items than what have been mentioned above linking the Rothschilds to the various tentacles. Each of the various tentacles that conspiracy theorists have put forth, – the Jews, the Masons, the Intelligence Communities, the International Bankers, the Prieure de Sion, the Catholics, the Trilateral commission, the CFR, the New Age, the Cults – each ties back to the Rothschild’s power. 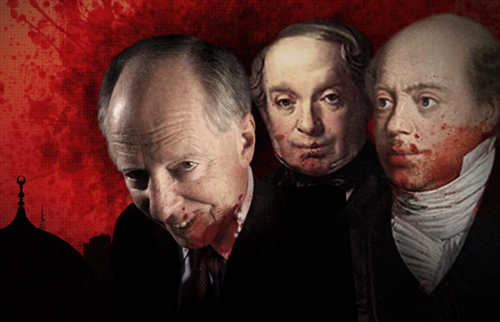 If one examines who has been appointed to head the Fed, and to run it, the connections of the “Federal” Reserve System to the Rothschilds can further be seen. Another private enterprise using the name Federal that the Rothschilds also direct is Federal Express.

Anyone else might be taken to court for making their businesses sound like their are government, not the Rothschilds. It is appropriate for them to appropriate the name of Federal, because by way of MI6 via the CIA they instruct the U.S. government. Senators are bought and paid off by their system, as investigators of the BCCI discovered. The Rothschilds have been intimately involved in witchcraft and the Illuminati since its early known history. The Kaiser of Germany seems to refer to them when he said, “the magic powers of money as wielded by the Lord of Lucre are powers of Black Magic at its blackest.”

If only half of the wealth is controlled by the Rothschilds, it indicates that if they are to be part of the world’s ruler ship, they must have allies.

The Rothschilds and Rockefellers are only two of thirteen controlling families of the Illuminati. Two Jewish families that appear to be prominent are the Oppenheims and the Oppenheimers.

A. Oppenheim was situated in Cologne. The Oppenheimers were early members of the Bavarian Illuminati. The Bund der Gerechten (League of the Just) was an illuminati front run mainly by Jews who were Satanists.

This Bund financed in part by the Rothschilds paid the Satanist and Mason Karl Marx to write the Communist Manefesto. The Jew Gumpel Oppenheim was in the inner circle of the Bund.

His relative Heinrich Oppenheim masterminded the communist revolution of 1848 in Germany. The Communist Party’s official histories even accept the Bund as the predecessor of Communism.

The Oppenheimers apparently are close to the Rothschilds. J. Robert Oppenheimer of the CFR was exposed as a communist.

Harry Oppenheimer, an international banker, is chairman of the Jewish De Beers world-wide diamond monopoly, and chairman of the Anglo-American Corp. Oppenheimers can be found in important financial positions in the U.S. They help run around 10 large foundations, including the Oppenheimer Haas Trust of NY for the care of needy Jewish children.

The Jewish Ency. Vol. 2, p. 496 indicates other Jewish families “adopted the Rothschild plan.” These were the Lazards, Sterns, Speyers, and Seligmans. The Rothschild plan was to place family members in the 5 largest European capitals to coordinate their activities. “One of Germany’s largest magazines is the Stern, and Ernst Stern is second-in-command of the World Bank.” 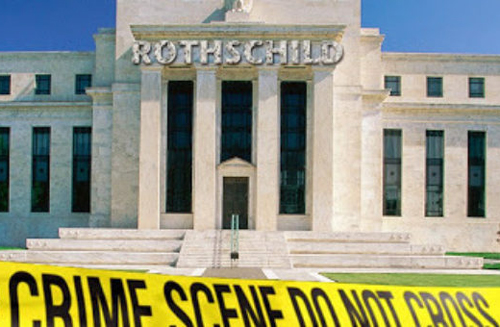 Isaac Hildesheim, a Jew who changed his name to Justus Hiller is credited as being the founder of this Frankfurt lodge. Michael Hess, principal of the Reformed Jewish school Philanthropin was an important figure in the lodge too, as was Dr. Ludwig Baruch (later Borne) who joined in 1808.

In 1816 he came out with a warning pamphlet Das Judenthum in der M[aurere]y (The Jews in Masonry). A powerful ally of the world’s jewry can be seen beginning with men like Oliver Cromwell, who was considered a Mason.

Cromwell was financed by Jews, and helped the Jews gain power in England. Cromwell was willing to go along with the Jews, because he became convinced of British Israelism. Since the core of the conspiracy of power is Jewish, the attitude of those allied with it hinges on their attitude toward the Jewish people.

The religious idea that the British people are descended from the tribes of Israel doesn’t automatically place people into the camp of the conspiracy. Some of the British-Israelites realize that the so called Jewish people in general have no claim over the promises of God.

For that reason, they realize that it is not the Christian duty to bow and scrape at their every move. When Christians can be arrested in Israel and abused, and Christians will not even stand up for their own kind, we can see how much hold the idea of the “Chosen Race” theory has over Christendom.

Some of the British Israelites such as the Mormons, the old New England wealthy families such as make up the Order, some Masons and New Agers, and the non-Jewish members of the Priuere de Sion are collaborating with the One-World-Power. The anglican church which is run by the Freemasons is strongly British Israelistic.

Sorting Out the Various Identity Groups

In contrast, a hodge-podge of groups which are opposed to the conspiracy like some Neo-Nazi groups, and various Churches unrelated with them are also believers in British Israelism.

These various groups are sometimes all lumped together as the “Identity” movement, which is misleading because of their vast differences. It is important to differentiate between those groups that are trying to approach things from a Christian perspective and place themselves under the authority of God, and those who are setting themselves up under the New Order’s authority, or under their own authority.

Co-Masters of the World: The Media

Eustice Mullins has published his research in his book Who Owns the TV Networks showing that the Rothschilds have control of all three U.S. Networks, plus other aspects of the recording and mass media industry.

It can be added that they control Reuters too. From other sources it appears CNN, which began as an independent challenge to the Jewish Network monopoly, ran into repeated trickery, and ended up part of the system.

Money from B.C.C.I., (B.C.C.I. has been one of the New World Orders financial systems for doing its dirty business such as controlling Congressmen, and is involved with INSLA, the Iran-Contra Scandal, Centrust, and other recent scandals) which has tainted so many aspects of public power in the U.S. has also been behind CNN.

Perhaps nothing dominates the life of some Americans as does the television. Americans sit themselves before the television set and simply absorb what it projects to them. On a day to day basis the biggest way the Rothschilds touch the lives of Americans are the three major networks which are under Rothschild direction.