The US Military, Deep State and American Innocence 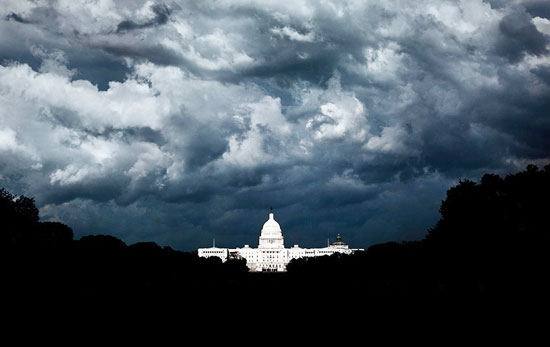 While only 11% of Americans trust Congress, a whopping 74% have a “great deal or quite a lot of” trust in the military, which also vastly outperforms newspapers (23%) and even the US Supreme Court (37%). Similarly, the CIA and the FBI get an “excellent” rating from 58% of Americans. While reverence for the military is quite common all over the world – perhaps related to evolutionary fear – it behooves us to be a bit more critical and objective. Americans blindly accept all verdicts from the intelligence agencies. The rise of the colossal military and the Deep State are new phenomena in American history, and a dispassionate scrutiny underscores the need for more vigilance on our part.

While many Americans consider it heretical to question the US military, none other than a five-star military general and US president did just that. In an extraordinary farewell speech in 1961, Eisenhower went on national TV and said: “We must guard against the acquisition of unwarranted influence by the military-industrial complex. The potential for the disastrous rise of misplaced power exists and will persist.”
Such a speech would now be derided as a conspiracy theory and even labeled as treasonous.

Guess who thought that the CIA had turned into an American Gestapo? Harry Truman, the US president who created the CIA. He said in his biography: “Those fellows in the CIA don’t just report on wars, they go out and make their own (wars), and there’s nobody to keep track of what they’re up to. They spend billions of dollars on stirring up trouble. The CIA has become a government all of its own.”

Former Director of the CIA, William Colby, described CIA’s culture in his memoir as follows: “a cult of intelligence … that holds itself to be above the normal processes of society, with its own rationale and justification, beyond the restraints of the Constitution…”

Election Meddling and Coups by the CIA

Since World War II, the CIA has meddled in more than 80 foreign elections around the world (doesn’t include coups and regime changes!).
The US Senate’s Church Committee in 1975 documented several instances of US meddling in other nations. The operations included suitcases of cash to bribe politicians and voters, manuals for psychological warfare, sensational fake news, organized mass protests, armed violent oppositions etc.
Starting in the 1980s, the Deep State refined its plans for regime changes, resorting to the use of sophisticated NGO’s such as the USAID, NED and Open Society Foundations of George Soros.
When asked if Americans still meddle in other countries’ elections, CIA director James Woolsey grinned and responded: “Myum, myum, myum”.

There is incontrovertible proof for some of the blatant coups, thanks to declassified CIA documents – for example, the overthrow of democratically elected leaders in Iran in 1953 and in Guatemala in 1954.

Recently released “JFK Files” from the CIA archives show detailed plans to assassinate Fidel Castro that included exploding cigars and tuberculosis-laced diving suit. Other leaders targeted in these documents include General Trujillo of Dominican Republic and Patrice Lumumba of Congo.

William Blum has done extensive research and documented numerous foreign assassinations – successful and attempted – by the CIA and/or the US military. 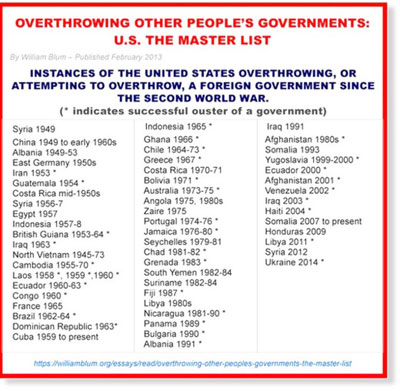 Theoretically, nothing stops the killing machine from operating within the US. Even intellectuals like David Talbot – founder of Salon magazine and editor of Time magazine – are convinced that some from the top echelons of the CIA assassinated JFK.

President Truman also seemed to suggest the same when he wrote an extraordinary op-ed in Washington Post one month after JFK’s assassination saying that CIA’s covert operations must be terminated.

By the way, the phrase “conspiracy theorist” was invented by the CIA in 1967 to discredit anyone challenging official narratives!

Right now, the US arms/funds about 3 in 4 of all dictators around the world! How’s that for spreading freedom and democracy? The US has supported and installed numerous brutal tyrants and authoritarians all over the world in the last century. Suharto in Indonesia, for example, killed two million people, but was loved by the West, since he let western corporations exploit his people and plunder his country.

After the defeat of Hitler, the US recruited more than 1,000 Nazis, including high-ranking officials, to work against the Soviet Union.
Under Operation Paperclip, the CIA brought numerous Nazi scientists into the US.
Moreover, the US has trained, armed and funded Islamic terrorists in Afghanistan, Chechnya, Libya, Syria etc. to wage proxy wars.

From 1950 to 1975, the CIA – using a fleet of planes and helicopters known as Air America – was involved in massive heroin trafficking from the Golden Triangle area in Myanmar, Thailand and Laos.

After the Vietnam War, the Deep State in the 1980s used heroin in Afghanistan to fight the USSR and cocaine in Central America to fight leftist leaders. According to Gary Webb, the CIA also imported cocaine into the US.

In 1998, a Congressman entered into official record a shocking document called “A Tangled Web: A History of CIA Complicity in Drug International Trafficking” that summarizes CIA’s nefarious drug activities from 1947 to 1996.
Since the US invasion of Afghanistan after 9/11, opium cultivation there has exploded. Correlation or causation? As a NY Times investigation revealed in 2009, the biggest Afghan drug dealer was on the CIA payroll.

CIA’s Operation Mockingbird was an extensive operation to infiltrate and control all the major news organizations. Over the past several decades, the CIA and the Pentagon have actively participated in over 800 major movies and 1,000 TV shows to make sure that the right (propaganda) message reaches the audience.

Declassified documents on MK-Ultra and other mind-control and brainwashing programs and experiments – LSD and numerous other drugs, hypnosis, electric shock etc. – are right out of a sci-fi horror movie.

Remember all the deceit and fearmongering that convinced the Americans to go to Iraq war after 9/11?
• Saddam was trying to buy Uranium;
• He had reconstituted nuclear weapons;
• There will be a “mushroom cloud” in the US;
• He had biological weapons in mobile labs etc;
• He could launch chemical weapons against Israel and British soldiers (in Cyprus) in just 45 minutes. 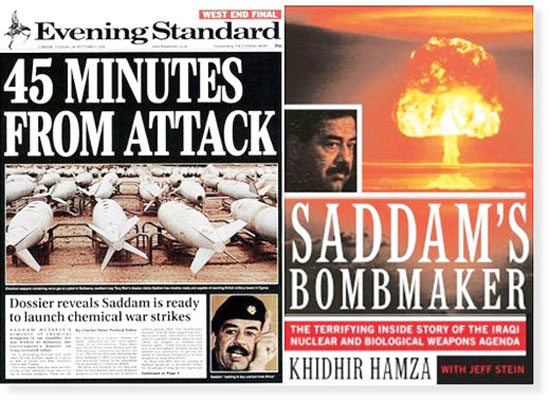 Through innuendo and bare-faced lies, the Establishment convinced 70% of Americans that Saddam was responsible for 9/11 and even the Anthrax attack that followed.
Go back in history, there are many such lies, including the Gulf of Tonkin claim that helped the US launch the Vietnam War.

John Perkins’ book Confessions of an Economic Hit Man is another must read to understand how banks and corporations drive geopolitics, coups, regime changes and wars in the 21st century.

Somehow, it’s psychologically hard for people to think that their government might stage false flag attacks. However, as recently declassified documents show, the CIA had many such ideas – killing boatloads of Cuban refugees or blowing up ships and then blaming Fidel Castro; carrying out “terror campaigns” – their own words – with bombs in Miami and Washington D.C. to frame Castro; and buying Russian planes to attack US soldiers to start a war with the Soviet Union. Shockingly, these plans got approved all the way up to the Joint Chiefs of Staff, and only got stopped by JFK or his brother.

There is convincing evidence that the CIA carried out similar false flag attacks – Operation Gladio – in Europe in the 1950s through the 1970s to blame the communists and shift the political landscape to the right.
In recent years in Libya, Syria and Ukraine, false flag attacks were used to launch regime change operations. Wild accusations such as the Novichok poisoning in the UK by Russia also bear all the hallmarks of fake or false flag attacks.

While American politicians are skilled at crying crocodile tears over human rights abuses by geopolitical adversaries, the CIA runs secret torture prisons in many countries to avoid scrutiny. Sometimes they do it themselves, like in Guantanamo or Abu Ghraib, Iraq.

According to a 1994 government report, hundreds of thousands of Americans were subjected to unethical radiological, chemical, biological and medical experiments between 1940 and 1974. The US military even conducted biological warfare testing on the entire city of San Francisco!

Another deeply held American belief is that the US elites always hold to high moral standards, value lives and are compassionate. In September 1945, merely one month after Nagasaki and Hiroshima, the US military drew up plans to drop 204 atomic bombs on 66 cities in the USSR, our ally during World War II and still an ally at that time.

Then a decade later, in 1956, the US military had detailed plans to drop 2,000+ atom and hydrogen bombs on 1,200 cities in Russia, China and Eastern Europe. This would have immediately killed 500 million people, 99% innocent civilians. Think about what kind of evil monsters and sociopaths would come up with such genocidal ideas. Also, if they had carried out their psychopathic plan, the nuclear fallout might have ended the entire human race.

Since 9/11, US/NATO wars have cost $5.6 trillion and killed 5 to 7 million people, but clever propaganda hides or justifies such atrocities. In the 1990s, half a million Iraqi children died from US sanctions, which Sec. of State Madeleine Albright said was “worth it”.

Wars and conflicts are extremely profitable for the military-banking-intelligence complex, which uses soldiers as pawns. 2.7 million Americans have fought in Iraq and Afghanistan since 9/11; and more than 400,000 of them suffer from PTSD.
If diplomacy, free trade and fair wages become the norm, we wouldn’t need 800 military bases in 140 countries to prop up friendly dictators, bully competitors, and enforce the Ponzi scheme of the Petrodollar regime.
The unsustainable Empire thrives because we are manipulated by the media into not questioning or challenging it.

In the supposed land of the free, Americans don’t mind the NSA spying on them. While many assume that it’s to protect them from terrorists post 9-11, Edward Snowden revealed that the mass collection of phone calls has been going on since 1985. Thanks to the Internet, the Deep State now records every phone call, text message, video chat, email etc. If the spooks have dirt on every single American, it’s no wonder that no politician speaks out against this Orwellian nightmare.
The attacks on WikiLeaks and Julian Assange also reveal how much the Deep State hates transparency and accountability.

The zeitgeist in America demands blind support for the military, defense industry and the intelligence community. Like fish in water, Americans have lost the ability to notice the pervasive and omnipresent propaganda. However, they owe it to themselves to be more knowledgeable and objective in processing and reacting to information. They also need to be more aware of what their government and the mass media are doing. Freedom, liberty and prosperity are not achieved and maintained through willful ignorance, blind allegiance and naïve faith.