“Thinking Is Hard”: The Horror Of The Deep State’s Plan Exposed (2) 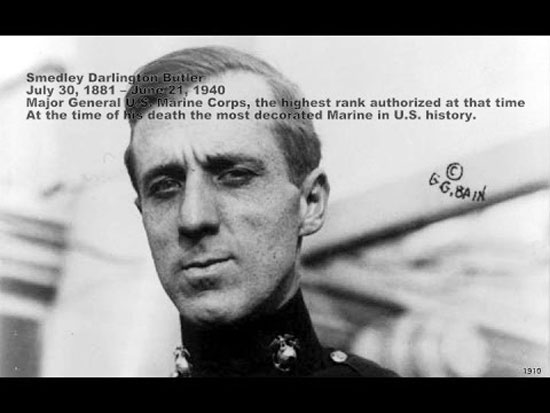 The use of false flag events, fake news, and staged graphic photographs to control and manipulate public opinion has been utilized for decades by the Deep State to push the country into military conflict craved by the military industrial complex. We’ve known for almost a century war is a racket, as described by General Smedley Butler  in 1935.

We were warned by the most respected general of the XX Century about allowing the military industrial complex to gain control over our government and politicians.

Eisenhower experienced the influence of the Deep State from the military perspective and firsthand as president. Sadly, his hopes for an alert and knowledgeable citizenry keeping the military industrial complex under wraps were dashed on the shoals of a purposefully failing public education system and a relentless propaganda campaign championing never-ending war.

“In the councils of government, we must guard against the acquisition of unwarranted influence, whether sought or unsought, by the military industrial complex. The potential for the disastrous rise of misplaced power exists and will persist. We must never let the weight of this combination endanger our liberties or democratic processes. We should take nothing for granted. Only an alert and knowledgeable citizenry can compel the proper meshing of the huge industrial and military machinery of defense with our peaceful methods and goals, so that security and liberty may prosper together.” – Dwight D. Eisenhower .

Those controlling the levers of power have understood the power of propaganda since Edward Bernays taught them how to manipulate the public mind with his theories of propaganda in 1928. He believed the masses were driven by biological urges which needed to be channeled and guided by highly intelligent corporate elite overseers. His contempt for the masses was born out in his corporate fascist view of the world.

He believed our dangerous animalistic urges needed to be subdued to keep society sedate and controllable by those constituting the invisible government (aka Deep State). He trained the controllers to use propaganda in order to mold the minds of the masses in a way most beneficial to the state.

“The conscious and intelligent manipulation of the organized habits and opinions of the masses is an important element in democratic society. Those who manipulate this unseen mechanism of society constitute an invisible government which is the true ruling power of our country. … We are governed, our minds are molded, our tastes formed, our ideas suggested, largely by men we have never heard of. This is a logical result of the way in which our democratic society is organized.

Vast numbers of human beings must cooperate in this manner if they are to live together as a smoothly functioning society. … In almost every act of our daily lives, whether in the sphere of politics or business, in our social conduct or our ethical thinking, we are dominated by the relatively small number of persons… who understand the mental processes and social patterns of the masses. It is they who pull the wires which control the public mind.” – Edward Bernays.

The use of propaganda and the flogging of false flag narratives by the corporate media acting as mouthpieces for the Deep State has worked wonders and resulted in the deaths of hundreds of thousands of American boys and innocent victims (collateral damage according to neo-cons) around the world. An explosion that sunk the USS Maine was used by William Randolph Hearst and William McKinley to provoke a war with Spain in 1898.

The Gulf of Tonkin incident was a false flag used by LBJ and the war party in 1964 to kick off the Vietnam War, resulting in over 58,000 American deaths, 153,000 Americans wounded, hundreds of thousands mentally scarred for life, and the deaths of over two million Vietnamese. For who? For what? The American boys sacrificed on the altar of the Deep State were nothing but cannon fodder in the warped minds of McNamara, LBJ, Westmorland and the rest of warmongering elitists. Only the military industrial complex benefited, as the burgeoning welfare/warfare state resulted in raging inflation during the 1970s.

As time passed, the propagandists have become immensely more sophisticated in their messaging, psychological assessment of a dumbed down American populace, and manipulation of patriotism, symbolism and emotions to run roughshod over those opposing nonsensical, illegal, and immoral military intervention around the world.

The most successful technique utilized by the Deep State for the last few decades has been “atrocity propaganda”. Appealing to the emotions of people who have been indoctrinated by government schooling to feel rather than think has been wildly successful in controlling the agenda.

Atrocity propaganda was initially employed to sway public opinion to support the First Gulf War against Saddam Hussein, engineered by Madison Avenue maggots from Hill & Knowlton on behalf of the Kuwaiti government. In emotional testimony before Congress an unidentified 15-year-old girl, who happened to be the daughter of the Kuwaiti ambassador to the U.S., gave false testimony that she had witnessed Iraqi soldiers take babies out of incubators in a Kuwaiti hospital, take the incubators, and leave the babies to die.

This propaganda successfully convinced a clueless public to support our involvement in the Gulf War. With the end of the Cold War, how could the military industrial complex generate immense profits without enemies? Afterwards, Stormin Norman Schwarzkopf was glorified as the brilliant courageous hero. The masses need a hero to worship.

Whether 9/11 was a false flag or a monumental security blunder, it was hijacked by the neo-con faction within the government to wage perpetual war and turn our country into a surveillance state.

A critical thinking citizen or honest journalist might wonder how the 342 page Patriot Act, which changed 15 existing laws and created entire new agencies, could be written, debated, and signed into law within 45 days of the 9/11 attack. It almost seemed like it was already written, awaiting the opportune time to implement. The War on Terror had begun.

The Deep State managed to create a war against a tactic, which could never be won. It has done wonders for the military industrial complex, as arms industry stocks have risen 400% to 500% since 2001 versus the 100% rise in the S&P 500. War is a profitable racket. 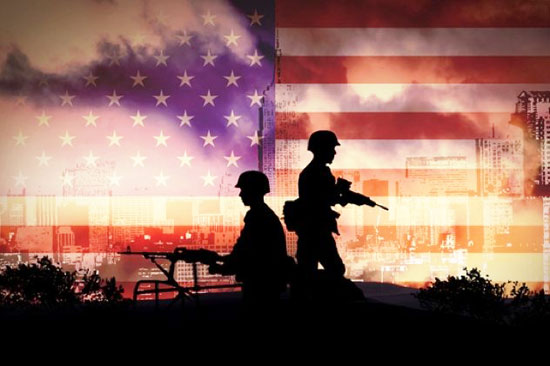 The neo-cons immediately began their propaganda campaign to invade Iraq, even though they had absolutely nothing to do with 9/11. There were virtually no religious Muslim zealots inhabiting the country. Hussein hated bin Laden and his ilk. The propaganda machine, driven by Cheney and Wolfowitz, churned out false stories about 9/11 involvement and the imminent threat from Hussein using “Weapons Of Mass Dstruction”.

The Colin Powell show on national TV convinced the fearful American populace to support the invasion of a country who threatened us in no way, without a declaration of war from Congress.

The invasion of Iraq set the precedent that presidents can wage war around the globe with no legislative approval. The invasion became a reality TV show called Shock & Awe. In retrospect, the Iraq War was either a colossal error of judgement or exactly what the Deep State had in mind.

The ultimate financial cost of our Middle East adventures will exceed $6 trillion, while 4,400 young men gave their lives, 32,000 were badly wounded, thousands more are afflicted with PTSD, and hundreds of thousands of Iraqis killed or maimed, all for a worthless cause. Iraq is now a failed state, with Muslim terrorists controlling large swaths of territory.

They question nothing. They believe whatever the boob tube tells them to believe. Their extreme level of normalcy bias allows the Deep State to maintain control and become outrageously bold in their lies, misinformation, and ability to convince the masses of the most ridiculous narratives. Only one voice in the wilderness remains. Speaking truth to power only creates change if an educated populace says enough is enough.

“How did the American people ever reach this point where they believe that US aggression in the Middle East will make us safe when it does the opposite? How did the American people ever reach the point where they believe that fighting unconstitutional wars is required to protect our freedoms and our Constitution? Why do we allow the NSA, CIA, FBI, TSA, etc. to destroy our liberty at home, as part of the Global War on Terror, with a pretext that they are preserving our liberty?

Why are the lying politicians reelected and allowed to bankrupt our country, destroy our money, and enter wars without the proper consent? Why do the American people suffer in silence and not scream «Enough is enough! »? We’ve had enough of the «humanitarian do-gooders» and the proponents of «American exceptionalism» who give us nothing but war, economic suffering, and less freedom. This can and must be stopped.” – Ron Paul, Swords into Plowshares: A Life in Wartime and a Future of Peace and Prosperity .

“The offing was barred by a black bank of clouds, and the tranquil water-way leading to the uttermost ends of the earth flowed somber under an overcast sky–seemed to lead into the heart of an immense darkness.” – Joseph Conrad, Heart of Darkness.

Read the third part of the article.