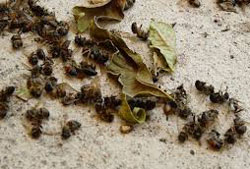 Thousands of dead bees kept washing up ashore in Florida, in February (2017) baffling scientists who say they haven’t figured out why this is happening.

Residents say that so many dead bees have washed up ashore on the beach that they were getting stung just by walking along the sand.

Visitors to Lowdermilk Park Beach also said that they were avoiding the beach altogether after being repeatedly stung while walking the shoreline.

NBC Miami reported: “Naples beach goers had to watch where they stepped after some people say they have been stung just along the shoreline, according to NBC affiliate WBBH-TV.”

Martha Duff lives in Naples and had a painful encounter with the bees.
“I’ve been stung a couple of times and at first, I didn’t know what it was, and then I realized. I had an allergic reaction” Duff said. 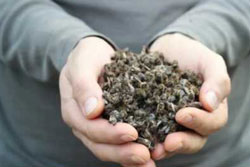 Naples residents say the problem lasted for several weeks. They were both concerned and confused.

“Why are there bees? Where are they coming from? And why are they in a very specific area of the beach?” Duff wondered.

A bee expert told WBBH that seeing bees wash up at the beach is very unusual. The cause could be anything from a nearby pesticide spraying forcing them to the water or a swarm flying overhead that became exhausted and flew into the water.

7 Signs Of A Vitamin D Deficiency