In February (2018), the US said it was working to create “alternative government authorities” on Syrian territory. This latest move, aside from demonstrating once again that the US has no respect for Syria’s territorial integrity, indicates we may be seeing more from that group of mercenaries known as Islamic State.
Thus, it seems to be an appropriate time to reflect upon a set of very strange circumstances that led to the rise of this loathsome terrorist group. Here are the top 10 reasons, in no particular order, as to why we should be very suspicious about this group.

In late August 2013, the United States was on the verge of initiating a massive attack on the government of Syrian President Bashar Assad over a deadly chemical attack that had occurred in the town of Ghouta just days earlier. Although it would have made no sense for Assad to have resorted to such dirty tactics, Washington had found its casus belli (an act or event that provokes or is used to justify war). It should be noted that at this time the so-called Islamic State of Iraq and the Levant was largely unknown. That would change soon enough.

Meanwhile, a terrible thing happened on the way to this jolly little war. UK Prime Minister David Cameron suffered a stunning defeat in the House of Commons, voting down his effort to join the Americans in Syria. Apparently the British were America’s obedient poodle no longer.
The setback had an apparent sobering effect on Barack Obama, who suddenly – in a feigned nod to democratic procedure and all that – called for Congress to decide whether or not to use military force against Syria. Tellingly, that vote never materialized.

What did materialize, however, and with alarming speed and viciousness, was a terrorist group that rose up like a phoenix from the ashes of Iraq known as Islamic State (ISIS), with evil designs to create an Islamic caliphate across a wide swath of Iraq and Syria.
In other words, the perfect casus belli for the US in Syria that would require no need for a vote from Congress. 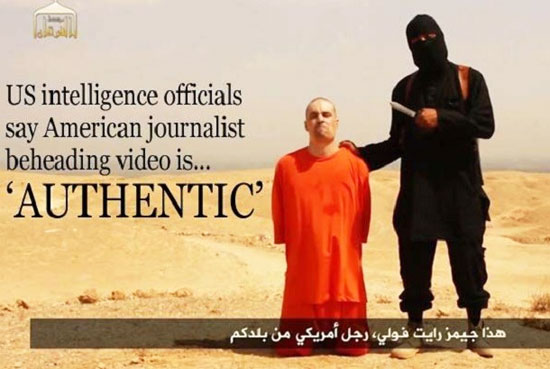 As if to draw gratuitous attention to itself more than anything else, the Sunni terrorist group ISIS, under the leadership of one Abu Bakr al Baghdadi, began to grab world headlines not by its battlefield exploits, but by carrying out videotaped executions of Western journalists, as well as destroying cultural heritage sites. Many can’t help wondering: why didn’t the group just let its fighting skills speak for itself? Why the apparent need for such outrageous publicity stunts? Was this compensation for something the group was desperately lacking?

In any case, starting in August 2014, almost one year to the day that Obama was forced to put the brakes on his Syrian attack, the beheadings began in earnest.
On August 19, US journalist James Foley (image above), seen kneeling on the ground in some undetermined location next to his apparent executioner, “Jihadi John”, reads out a short statement before being beheaded by his captor. However, Islamic State spared its audience the gore by not showing the moment of the actual beheading; the video only shows a head lying on a body following the purported act. Even Western mainstream publications admitted that something didn’t seem quite right.

Under the headline, Foley murder video may have been staged the Telegraph, a reputable British newspaper, interviewed forensic experts who called into question the moment in the video when Foley is allegedly being beheaded by his captor.
“After enhancements, the knife can be seen to be drawn across the upper neck at least six times, with no blood evidence to the point the picture fades to black” the expert said.
Another expert who examined the video for the newspaper said: “I think it has been staged. My feeling is that the execution may have happened after the camera was stopped.”

Incredibly, every subsequent beheading video put out by Islamic State attracted the same amount of skepticism – not just from alternative websites, who were also noticing the many irregularities contained in the videos, but from mainstream media news sources.

Following the release of the video purported to show the beheading of Steve Sotloff, a journalist who worked with the Jerusalem Post, The Australian newspaper reported that “the apparent beheading on camera of a second US hostage by a man with a British accent was again staged, according to forensic analysis”.

Then there was the video of 21 Egyptian Coptic Christians, dressed in impeccably clean orange jumpsuits, being led along a Libyan beach by black-clad members of ISIS, all of whom appear to be members of some NBA basketball team.
Veryan Khan, editorial director of the Florida-based Terrorism Research & Analysis Consortium told Fox News that “the speaker, ‘Jihad Joseph’ is much larger than the sea in both the close up and wide shots, and his head is bizarrely out of proportion, meaning he was filmed indoors and the sea added behind him… In addition, the jihadists featured in the film look to be more than 7 feet tall, towering as much as two feet above their victims…”

In July 2015, yet another strange report emerged, CyberBerkut, a Ukrainian group of hackers, said it hacked John McCain’s laptop while he was on an official visit to Kiev around the first week of June 2015. In a report by TechWorm, what they purported to find was a fully staged production of an ISIS execution video, with an actor portraying an executioner who is holding a knife in preparation to behead the prisoner.
The authenticity of this video has not been independently verified.

None of this proves that the individuals in all of the ISIS beheading videos did not go on to meet some grisly fate. However, it seems worth noting that so many forensic experts have spoken out on the “staged” nature of these videos, and that the actual moment of execution during these film productions is never actually shown. Why would such a barbarous group of villains like ISIS need to script and censor their videos? 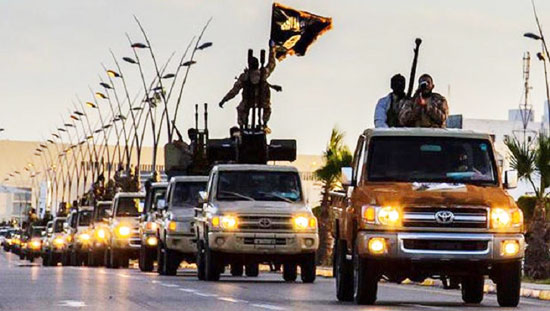 Despite employing state-of-the-art fighter jets, like the F-16 Fighting Falcon and A-10 Warthog, the US campaign to destroy Islamic State was largely an exercise in utter futility. There is no other way to explain it.

In June 2014, a convoy of hundreds of ISIS fighters drove through 200 km of the Syro-Arabian Desert in fresh-off-the-lot Toyota pickup trucks on the way to Syria. For any modern military, eliminating such a target would have been the equivalent of a lazy afternoon at the shooting range, or shooting fish in a barrel. The fact that these terrorists made it to Syria unmolested tells us everything we need to know about America’s real agenda.

“With state of the art jet fighter aircraft… it would have been – from a military standpoint – ‘a piece of cake’, a rapid and expedient surgical operation, which would have decimated the Islamic State convoys in a matter of hours” Michel Chossudovsky wrote in Global Research.
“Instead what we have witnessed is an ongoing drawn out six months of relentless air raids and bombings, and the terrorist enemy is apparently still intact.”
“And we are led to believe that the Islamic State cannot be defeated by a powerful US led military coalition of 19 countries”, he added.

The only reasonable conclusion to make from all of this is that the air campaign was not designed to eliminate Islamic State. 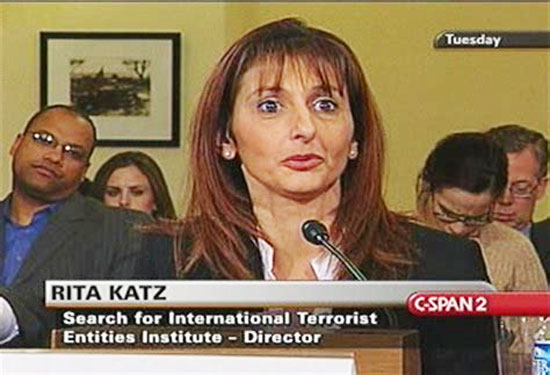 In 2002, Rita Katz and Josh Devon founded Search for International Terrorist Entities Institute (SITE), which, according to its website, is “the world’s leading non-governmental counterterrorism organization specializing in tracking and analyzing online activity of the global extremist community”.

In 2006, in a New Yorker article entitled Private Jihad: How Rita Katz got into the spying business, it was mentioned how SITE spoke directly with jihadists via various message boards: “Katz has a testy relationship with the government, sometimes acting as a consultant and sometimes as an antagonist. About a year ago, a SITE staffer, under an alias, managed to join an exclusive jihadist message board that, among other things, served as a debarkation point for many would-be suicide bombers.

For months, the staffer pretended to be one of the jihadis, joining in chats and watching as other members posted the chilling messages known as ‘wills’, the final sign-offs before martyrdom. The staffer also passed along technical advice on how to keep the message board going.

When Katz called officials in Washington, she was reportedly met with resistance: ‘Oh, Rita, I’m not sure you should even be communicating with them – you might be providing material support!’, they told her.”

In an interview with CNN, Katz admitted that her group was able to “beat [ISIS] with a release” of a video before it had even been disseminated.

In 2007, SITE came under fire for obtaining an alleged Bin Laden video a month prior to its formal release.

Some have raised questions as to how this small group is able to do what the government has not been able to: track ISIS and other terrorist groups with uncanny efficiency.