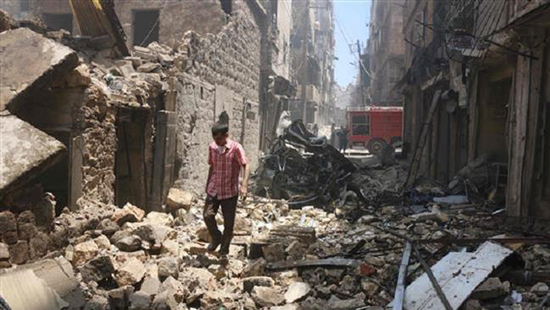 A man walks on the rubble of a destroyed building following reported clashes in the northwestern Syrian city of Aleppo on June 8, 2016. (Photos by AFP)

According to the so-called Syrian Observatory for Human Rights, the strikes targeted a series of residential buildings in the town of Mayadin.

“The toll includes 42 children. They were families seeking refuge in the town’s municipal building,” it was said in a statement.

The monitoring group had earlier said the dead included “at least 26 relatives of Daesh” militants, “many of them women and children, including Syrians and Moroccans.”

The attacks, which also hit the town’s blood bank and electricity plant, brought the death toll left by two days of coalition air raids on Mayadin to at least 132, after 15 people lost their lives in US-led strikes on the town.

The Syrian Observatory for Human Rights, which mostly advocates anti-government forces in the Syria war, said that the US-led coalition killed a total of 225 civilians between April 23 and May 23, the highest 30-day toll since the campaign began in 2014. It said some 1,481 people, including 319 children, had been killed as a result of the coalition campaign, which lacks any approval from the Syrian government.

The US and allies formed the coalition in 2014 to fight Daesh in neighboring Iraq, but they later expanded it to include territories in eastern and northern Syria. Damascus, which itself is fighting terrorists on multiple fronts, condemned the decision at the time, saying it violated Syria’s territorial integrity. 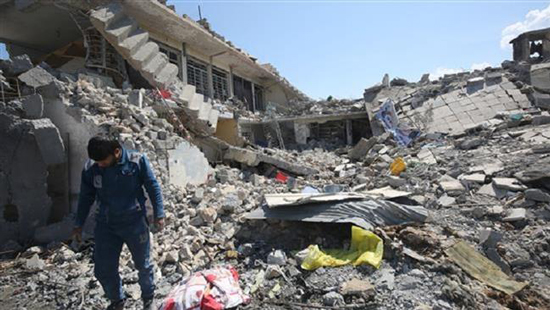 An Iraqi man inspects the damage in Mosul’s al-Jadida district on March 26, 2017, following a March 17 US airstrike.

The Pentagon acknowledged in a statement released in May 2017 that at least 105 Iraqi civilians lost their lives in a US airstrike on Mosul’s al-Jadida district on March 26.

This was while local officials and eyewitnesses said as many as 240 people may have been killed in the US air raid. The death toll is one of the highest in the military campaign led by the US against what are said to be Daesh targets.

The US military has admitted that the attacks in Syria have claimed hundreds of civilian lives, although Washington rejects figures provided by monitors on the ground and always tries to cut back on the number of the casualties. It said in May 2017 that 352 had been “unintentionally” killed since the campaign began.

The coalition is focused on a push to retake the Syrian city of Raqqah, the de facto capital of Daesh. The US and allies have provided direct support to Arab and Kurdish militants fighting Daesh although the move has faced direct criticism from Turkey, a main US ally which considers Kurds along the border with Syria a major threat to its security.

Syria has been fighting different foreign-sponsored militant groups since March 2011. United Nations Special Envoy for Syria Staffan de Mistura estimated last August that more than 400,000 people had been killed in the war until then.