US Machiavellian principle: «If anybody gets killed by them, they deserve it»


In the most shocking case «they were in the wrong place, at the wrong time» 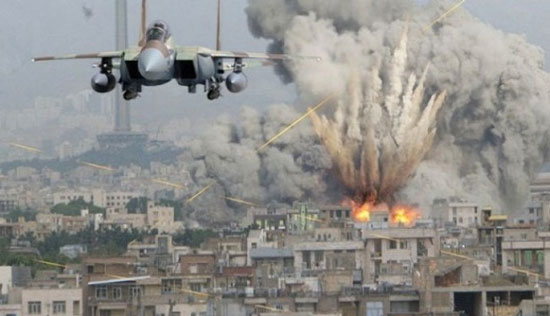 The American media and government’s unstated Machiavellian principle is that “anybody killed by the US deserves it” and the most shocking thing they say is that “they were in the wrong place at the wrong time”, says political commentator Lew Rockwell in an interview with RT.

Human Rights Watch issued a report in April 2017 accusing the US of failing to take precautions to avoid civilian casualties in the airstrike on March 16 in Syria.
Then, at least 38 people were killed in a US air raid that hit a mosque, according to data obtained by Human Rights Watch.

The strike took place as worshippers were gathering for evening prayers. However, The Pentagon denied its planes had hit the mosque saying it targeted a building 15 meters away from where Al-Qaeda members were reportedly meeting.

RT: Will anyone take responsibility for the casualties, do you think?

Lew Rockwell: No one will take responsibility, and they will draw out their investigation till everybody has forgotten it. And then they will say one thing or another. They are never going to say “Yes, we did the wrong thing”. You will never hear the US government say that about anything. Civilians are always the most frequent casualties in any modern war. It was true in the ancient world. It is certainly true ever since WWI with the democratic wars that come into operation. It sees every single civilian in the opposing country being connected to the government and thus he/she can be killed. Factories can be bombed, neighborhoods can be bombed, churches and mosques can be bombed. So, the US killed a million civilians in Iraq.

How many people have been killed in Afghanistan? I am just talking about the recent wars. Yemen, Libya, if we were to look at all the US wars in its history, there were millions of civilians killed. This is not an accident. They don’t necessarily target civilians, but a lot of times they do target civilians if you just look at WWII when they deliberately targeted German and Japanese civilians. Sometimes they just don’t care. “It is collateral damage, it happens, don’t worry about it.” But we should all worry about it. It is one of the great evils of war, maybe the great evil of war. The classical liberals always warned that “If we have to have a war, it should be a war of the soldiers.” Not the soldiers attacking the people. But ever since WWI we’ve had the soldiers attacking the people as the main thing they do. It is more dangerous in a lot of these countries to be a civilian than to be a soldier.

RT: What hope is there of getting any kind of independent investigation into these casualties? If not, why?

LR: It is like all these investigations by American police of themselves, of the government of itself. They’ll say “We investigated ourselves and it turns out we are not guilty.” OK, thanks very much for letting us know. These investigations would be quite wonderful, if they were actually able to get to the evidence, have unimpeded access to the crime areas. But the CIA is often among these inspectors. I wish and hope that maybe we will actually learn what happened, we will learn who is responsible…

RT: In incidents similar to the attack on April 15 (when at least 68 children were among 126 people killed in a bomb attack on buses carrying evacuees from besieged Syrian towns – a vehicle filled with explosives hit the convoy near Aleppo), Western media seems to avoid blaming the rebels. Very different when it comes to blaming President Assad and there’s no evidence provided. Why is that?
Can US be policeman, judge, jury and executioner of the world?

LR: The unstated principle of the American media and the American government is: if anybody gets killed by the US – they deserved it. The most shocking thing they say is that they were in the wrong place at the wrong time. How dare they’ve been at the wedding party, you could still be easily mistaken by a drone for a group of Al-Qaeda soldiers… If anybody was killed, don’t worry about it. It may be a PR problem for them. Then they worry. If it is not a PR problem, and the US media always make sure to the extent they can, it is never a PR problem for the US government to kill civilians…

There is something wrong with killing soldiers in the opposing country, to invade somebody else’s country, killing their soldiers, blowing up their buildings. Who invited the US to get into Syria? Why is the US in charge of Syria, why the US is in charge of the entire world? I guess they think they are in charge of the whole solar system, too. There is something very wrong about an empire like the US, the most powerful, vicious, deadly and the richest in the entire history of mankind.