US seeks to enforce global dominance by unleashing war on countries who oppose it, says Assad 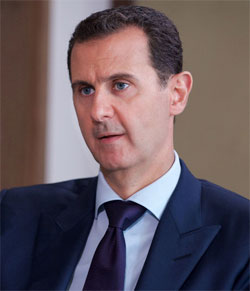 Washington’s pursuit of hegemony has fallen short of its goal, causing havoc and collapse of states, Bashar Assad said in an interview. Syria’s head believes that US meddling in the conflict aims to “save what is left” from its fading global preeminence.

In an interview to Iranian magazine Tehran Foreign Policy Studies Quarterly on October 5, 2016, the Syrian president argued that the US resort to force every time it fears a challenge to its clout and ability to control the international agenda unilaterally.

“United States builds its position on hegemony over other states and it has been the case since they took advantage of the USSR collapse and established unilateral control over this world up to this day” the president said, adding that the real motive behind US military interventions into foreign countries is to coerce them to submit to American authority, as in the case with Syria.

“Today, the United States are waging wars with the only goal to cement its project of total control by launching attack on everyone who opposes its dominance” Assad said, noting that Washington “rejects” and “refuses to acknowledge” the nascent balance of powers in the world affairs and the rise of other states.

Assad believes that while Washington has been losing its grip, it cannot accept the fact it’s not being in charge of the global affairs, and tries to reaffirm, if not to strengthen, its positions in the world.

“What is happening in Syria is an attempt to save what is left from the American and western hegemony in the world” Assad said.

According to the Syrian president “the only one thing the Americans have succeeded is creating problems and destroying states, no more than that.”

Washington spares no means to inflict losses on its ideological rivals, including “terrorism”, psychological and economical methods, Assad said. However, he thinks that a biased coverage of the conflict by mainstream media delivers one of the most significant blows.

“Here we are talking not only about the minds of the officials, but about the people, about the wrong analysis of what is happening and presenting things in a distorted way.” 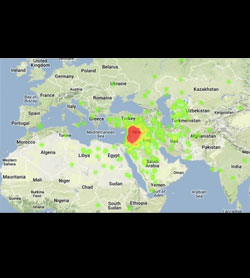 If Syria manages to withstand the pressure and uproot the terrorism from its soil, the victory will pave the way for “spread of ideas of independent development [in the world], that is what the West fears most of all,” Assad said, adding that “what will happen in Syria will affect the political map.”

The Syrian president does not believe that the US foreign policy may change its track in the foreseeable future, as wars are in the interest of American powerful lobby groups, in particular, arms and oil lobbies.
“There is no point in analyzing US politics on the basis of common sense, as it is guided by the factional interests” Assad said.

Earlier, Moscow raised concerns about the possible impact of the US trying to ouster the Syrian president by means of a direct military aggression, with Russian Foreign Ministry spokesperson Maria Zakharova warning it would lead to a “terrible, tectonic shift not only in the country, but in the entire region”.

For its part, Russia has been assisting Syrian government in the fight against terrorism at the request of Assad since September 2015. Russia’s UN envoy and former UN Security Council President Vitaly Churkin said on October 3, 2016 that he believes “had it not been for our [Russian] involvement in Syria, it might well be that the black flags would be flying over Damascus.”

The assertion that Russia has been the main contributor to the Syrian anti-terror campaign and did not let it slip into the hands of Islamic State (IS, formerly ISIS/ISIL) militants was rejected by Mark Toner, State Department’s spokesperson in a briefing on October 4, 2016. Washington has been downplaying Russia’s role in helping to put an end to the Syrian bloodshed, even claiming that its bombing campaigns have been largely targeting the opposition forces instead of IS.

Despite the breakdown of US-Russian cooperation on Syria, Washington indicated it is not going to inflame the standoff by striking Syrian government targets as it is concerned it would put Russian and US forces on the brink of military confrontation.

“The president [Barack Obama], as he thinks through those options, is going to think very carefully about the consequences of taking different actions,” White House spokesman John Earnest said on October 4, 2016.

US-led coalition carried out airstrike on Syrian government troops in Deir ez-Zoir on September 19, killing 62 servicemen and injuring over hundred. In the wake of the attack, President Assad announced the end of the latest US-Russia brokered ceasefire in Syria.