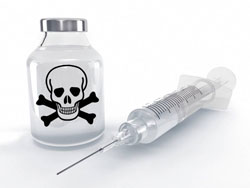 According to the Food and Drug Administration, the amount of aluminum in modern vaccines that infants are exposed to in their first year is about 4.225 mg, which the agency considers to be low, and thus safe. But some experts believe that there are vaccines being given to children today that contain far more than the FDA-regulated amount of 0.85-1.25 mg per vaccine.

There are some vaccines that, when taken in full, actually introduce 200 times more aluminum into children than is allowed under federal rules. Researchers at the University of British Columbia noted that aluminum ingestion is a clear cause of neurological problems and disorders in humans of any age.

In 2013, the scientists published a study in the journal Immunologic Research which confirmed that aluminum toxicity has a negative impact on the body’s nervous system “across the age span”. In adults, over-exposure to aluminum in the system can lead to age-related neurological conditions that resemble Alzheimer’s disease.

Similar outcomes were observed in laboratory animals, the researchers noted.

Has the government known all along? 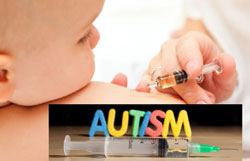 Furthermore, scientists found that in small children there is a great correlation between the number of aluminum-containing vaccines administered and the increased rate of diagnosed autism disorders. Indeed, several of the signs of aluminum neurotoxicity happen because of autoimmune reactions and inflammation.

There is even evidence that the federal government has known for some time that aluminum administered via vaccines causes health issues. According to a FDA notice dating back to January 2000, the FDA and the Department of Health and Human Services announced the “proposed collection of information… for the labeling requirements for aluminum content in large volume parenterals (LVPs), small volume parenterals (SVPs), and pharmacy bulk packages (PBPs) used in total parenteral nutrition (TPN)”.

In short, the agencies were seeking information related to aluminum content labeling requirements that were published in the Federal Register on January 26, 2000, because “research indicates that neonates and patient populations with impaired kidney function” could be “at high risk of exposure to unsafe amounts of aluminum”.

The document further explained that aluminum “may accumulate” in the bones, urine and plasma of babies receiving TPN. It also stated clearly that a number of “drug products” that are “routinely” used in vaccine therapy “may contain levels of aluminum sufficiently high to cause clinical manifestations”. 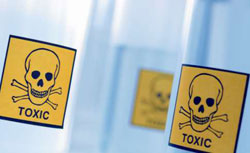 The agencies acknowledged that, generally speaking, when medications are administered orally the gastrointestinal tract serves as an effective barrier to the absorption of aluminum, with very small amounts of it actually being ingested and entering the body’s tissues.
Study finds even neonatal products with lowest amount of aluminum surpass FDA limits.

But “parenterally administered drug products” that contain aluminum naturally bypass the gastrointestinal tract and its protective mechanisms, causing aluminum to circulate within the bloodstream and thus collect in body tissues, the notification stated.
“Although aluminum toxicity is not commonly detected clinically, it can be serious in selected patient populations, such as neonates, and may be more common than is recognized”, the agency noted.

She said that one study involving neonatal babies who were tracked for 18 months found that even when they were given IV nutrition with the least amount of aluminum, it still was not possible to stay under the FDA-recommended limit of 4-5 µg/kg/day. “Neonates still received 1.8 to 3.2 times the upper limit of allowable aluminum exposure from PN if they received the least contaminated products”, the researchers concluded.