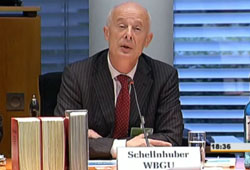 The public has been stunned by the words of Professor John Schellnhuber, one of the speakers for the Vatican. The professor said in June that the Earth is overpopulated by around 6 billion people and he is in favor of bringing in a New World Order. Schellnhuber had been chosen as a speaker for the Vatican and released a document about climate change. In the past, he has been criticized for having views that are radical on the devolution in changes to the climate.

His statement reads as follow:
“Let me conclude this short contribution with a daydream about those key institutions that could bring about a sophisticated, and therefore more appropriate version of the conventional «world government» notion. Global democracy might be organized around three core activities, namely an Earth Constitution, a Global Council and a Planetary Court. I cannot discuss these institutions in any detail here, but I would like to indicate at least that:
– the Earth Constitution would transcend the UN Charter and identify those first principles guiding humanity in its quest for freedom, dignity, security, and sustainability;
– the Global Council would be an assembly of individuals elected directly by all people on Earth, where eligibility should be not constrained by geographical, religious, or cultural quotas;
– the Planetary Court would be a transnational legal body open to appeals from everybody, especially with respect to violations of the Earth Constitution.ˮ

He has talked about what he would like many times before and has said that he is for a climate that has the focus on one world government ruling the planet. In the rolling out of the Papal document, Schellnhuber went on to say that he wanted to conclude things by offering a daydream about key institutions that might bring a more sophisticated and appropriate version of a world government notion.

In other words, Schellnhuber has the belief that by bringing in a New World Order government it would create a freedom by using the planetary court that would be under the guidance of the Earth Constitution that would start to declare the planet would only be able to hold and sustain a population of one billion. The Earth Constitution would bypass the Bill of Rights, and it would be founded on a global government, and this may lead to the order of billions of people on Earth being killed off. It is thought that the pontiff is going to argue that the exploitation of humanity on the resources of the planet have now crossed the natural boundaries of the Earth and the world is facing ruin without a revolution in the minds and hearts.

It seems that it is not just Schellnhuber that is all for depopulating the world though. Jerry Brown, the Governor of California, said that he would welcome a depopulation agenda that would be organized under a New World Government. In a Tweet, he said that California had too many people and said there would come the point when you have to ask how many people can be accommodated. He also said that climate change is the reason for the droughts they see and that the current one is far worse than anything they have had in the past.