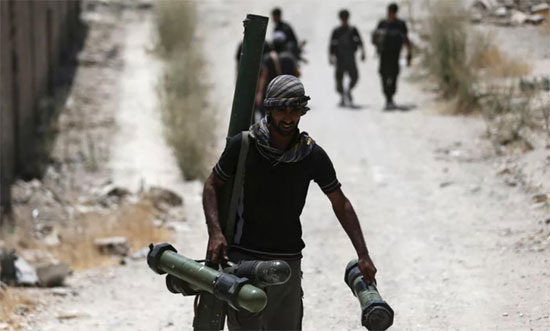 It goes without saying that the so-called Syria’s civil war is the most dangerous and destructive crisis on the planet. Hundreds of thousands have already perished in this conflict, while around ten million Syrians have been displaced since early 2011.

To start this conflict and then keep its fires burning the US and its Satellites have spent billions of dollars. It’s curious that back in January 2016 the New York Times has uncovered the criminal role that the CIA played in the Syrian war, reporting that members of the Obama administration have told them that Saudi Arabia is sponsoring the absolute majority of overseas unannounced wars, to keep the role played in them by Washington a secret.

At times the US and Saudi Arabia would share their intelligence, while in some cases Riyadh just hand out large sums of money to CIA operatives, without asking any questions.

Back in 2013 the CIA and Riyadh have agreed on launching an operation under the code name the Timber Sycamore that is aimed at toppling Syria’s elected officials through the continuous training and supported provided to all sorts of radical militants.

Under the deal, the Saudis contribute both weapons and large sums of money, and the CIA takes the lead in training the rebels on AK-47 assault rifles and tank-destroying missile. Moreover, Turkey, Jordan and Qatar have all been involved in this criminal design, even though exact amounts of money that the above mentioned states handed over to the CIA will always remain a secret.

Still, the New York Times stated that Saudi Arabia has been the major sponsor throughout all this time, allocating billions of dollars in a bid to bring down the government of Bashar al-Assad.

It’s been reported that ever since 2012, eight European countries have been selling large shipments of small arms to Saudi Arabia, the total worth of which has surpassed one billion euros. Most of these weapons end up in terrorist hands in Syria. At the same time, the US has been supervising these deliveries through its SOCOM operatives (SOCOM stands for United States Special Operations Command, an army unit), since this Operations Command is charged with overseeing US operations overseas.

According to the New York Times, American Special Forces have been shipping those weapons to Turkish and Jordan ports. There’s reports that SOCOM has paid at least 27 million dollars to Bulgaria and 12 million dollars to Serbia for small weapons in the period from 2014 to 2016 (which later reached Syria via Turkey). 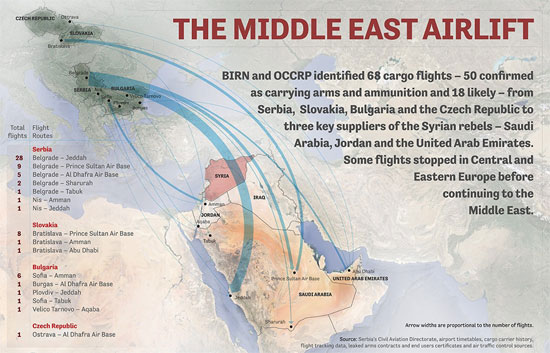 The Balkan Investigative Network and the Organized Crime and Corruption Reporting Project have revealed the involvement of several European countries and Persian monarchies in weapons sales to radical extremists, which have been going on since 2012. According to the data presented, by July 2016, a total of 1.2 billion euros has already been spent to make the so-called Arab spring a continuous armed conflict. Since then, thousands of units of small arms and ammunition have been smuggled from the Balkans (including Bulgaria and Romania) to the Persian Gulf. Read the report here.

The New York Times announced even back in 2012 that when a senior Croatian official visited Washington, he suggested to American officials that Croatia had many weapons available should anyone be interested in moving them to Syria’s rebels.

According to the respected alternative media site Veterans Today, Patrick Wilcken, an arms-control researcher at Amnesty International who reviewed the evidence collected by various reporters, has every reason to be convinced that Eastern Europeans have made a fortune on Syria’s war.

However, militant training and arms supplies is not the only form of support that Washington has been providing to the anti-government forces. For the last year, Western media sources have been stepping up their disinformation efforts to portray the efforts taken by Syria, Russia and Iran in their fight against radical terrorist as something utterly criminal. We were being said that the Aleppo operation allegedly leads to large numbers of civilian casualties, but not a single piece of evidence has been presented so far.

As the facts go, the Amnesty International is demanding the US-led Coalition forces, not Russia or Iran, to conduct thorough investigations into reports of civilian casualties from its operations and disclose their findings. Eleven Coalition attacks examined by the organization appear to have killed some 300 civilians during two years of strikes targeting the armed group calling itself Islamic State (IS). 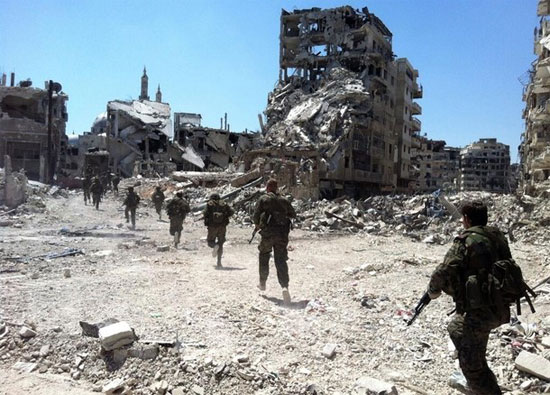 Moreover, now the US Army is sinking millions of dollars into private intelligence contractors, the The Daily Beast notes. This appears to be the first time the Pentagon has publicly acknowledged that private contractors are also playing a role in the fight inside Syria, and it’s one more signal that the US military is deepening its involvement in the fate of the country. The contract announcement said Six3 Intelligence Solutions – a private intelligence company recently acquired by CACI International – won a 10 million dollars no-bid Army contract to provide “intelligence analysis services” in Syria. Yet, military contracting and special operations experts say it is safe to assume that Six3 isn’t the first to get its boots on the Syrian ground.

As soon as Washington’s secret war against Syria is a rather peculiar matter, it goes without saying that all official reports about it are classified. However, as The Daily Beast reports, contractors encourage “mission creep” because they allow the Administration to get more Americans involved in the Syrian conflict than they would like to admit.

A notorious Western analyst, Jeffrey Sachs, says that the US refuses to tell the truth. The American people would call for peace rather than perpetual war. Trump has the opportunity to repair his broken legacy. He should start by leveling with the American people.

To put an end to the Syrian war one must demand the US government to provide a comprehensive report on the scale of its involvement in it. It is as simple as that. Once terrorist sponsors are officially established and named, they can be publicly condemned. Moreover, such a report would put an end to the attempts that various international players make to get the flames of the Syrian war burn brighter, which means there would be no other way to address the situation but to find a peaceful solution to this bloody war.