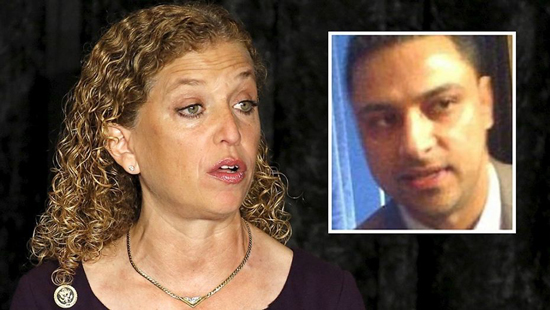 Disgraced former DNC chair Debbie Wasserman-Schultz employed a Muslim man under investigation for terrorist ties for almost a decade, and even after police alerted her to the fact the man was likely stealing sensitive data from Congress, she continued to allow him access to the servers where the information was being stolen.

Rejecting the police warning as “racist”, Debbie Wasserman Schultz is either the most naive person in the world, or a co-conspirator in a nefarious plot to funnel information out of Congress.

Given the known history of her corruption, conspiring, and plotting – leading to her dismissal as chairwoman of the Democratic National Committee after scandalous revelations about her conduct came to light during the election – it would be a naive person who grants the Florida Congresswoman the benefit of the doubt.

“Imran Awan is the lead suspect in a criminal probe into security breaches within the House of Representatives that was launched on February 2. Imran, who was hired in 2005, was reportedly in possession of an iPad used by the Democratic National Committee chair Debbie Wasserman Schultz around the time that DNC emails had been leaked to WikiLeaks.

As Rosiak discusses with Loesch, soon after Imran was hired, four of his family members were put onto the payroll, as well as one friend, each making the maximum amount of money you can make. Rosiak, however, believes they were likely not working there at all, but were simply ways for Imran to make more money.

‘Those were most likely ghost employees’, Rosiak told Loesch. ‘Basically, the money was going to him and he was doing the work, but they were all making the maximum allowable salary. They were making the same thing a congressman makes, basically. So that adds up to $5 million right there’.”

Of course, this was all taxpayer money too, but that’s not even the worst part. The Awans apparently owed money to the terror group Hezbollah after taking a $100,000 loan for their car dealership, “Cars International A” (CIA), that they couldn’t repay, thus linking the family directly to the organization.

And it gets even worse.

Politicalcult report: “Imran cheated the system for at least ten years, and throughout the entire time he was given access to top DNC leadership’s tech, which included Wasserman-Schultz’s iPad used for both her work for the DNC and as a member of Congress. Oddly enough, as authorities were investigating a secret server that was funneling Congressional data off-site, they were led to the Awan family and started investigating them.

The Awans worked for around 80 members of Congress over the past six years, which included members of the foreign affairs, homeland security, and intelligence communities, and they worked for many of them at the same time since it wasn’t full-time work. Meanwhile, as Capitol Police investigated Imran, they directly ordered him to stay away from House servers and tech because he was a prime suspect in the data mining investigation.

So what did Debbie Wasserman-Schultz do?
Circumvented the police’s order by keeping him on an ‘advisory position’. In other words, she granted him remote access to her systems, which potentially gave him access to other sensitive and classified systems, all while he’s the main suspect in a major criminal investigation.
Why did she do it? According to Rosiak, she believed the allegations against Imram were ‘racist’.

So basically, Debbie Wasserman-Shultz employed a man with terrorist ties for almost a decade, and even after being alerted to the fact that the man was likely stealing sensitive data from Congress, she still allowed him to access the servers where the information was being stolen.

She’s either the dumbest person on the planet, or she’s a co-conspirator in a nefarious plot to steal sensitive information from Congress. But whatever the case may be, she shouldn’t be anywhere near Capitol Hill, let alone hold an elected office that allows her to have her hands on the levers of power.

It’s unknown if the FBI is looking into the Awans, and there’s very little coverage of this story in the mainstream media. However, this could turn out to be one of the biggest scandals in recent history.”