When will Washington quit the business of killing Syria’s civilians? Never

It’s hardly a secret that through a series of actions in Syria, Washington is provoking an ever increasing frustration across the international community. The civilian death toll resulting from US attacks is simply shocking. But somehow nobody is speaking about the material damage that is being inflicted upon the infrastructure of Syria, as both public and private property is being subjected to indiscriminate bombing which results in the escalation of chaos that is only beneficial to such terrorist groups as Jabhat al-Nusra and the Islamic State (ISIS). 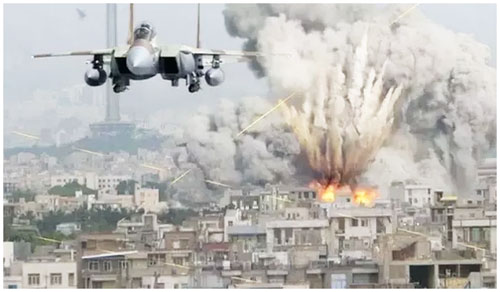 At the end of May, at least 116 civilians, including 42 children, perished as a result of two consequent air raids carried out by US-led coalition forces in the Syrian city of Mayadin, situated in the Deir ez-Zor Governorate. It’s curious that this was reported by Al Jazeera with a special reference to the London-based NGO “Syrian Observatory for Human Rightsˮ.
The first strike was launched on May 25, resulting in the deaths of of 35 people. US-led coalition aircraft returned on the following morning, claiming 80 more civilian lives.

If the Syrian Human Rights Monitoring Center is to be believed, in april alone the US Air Force murdered 225 civilians, including 44 children and 36 women. According to the head of this London-based NGO, Rami Abdel Rahman, april was marked by the highest number of civilian casualties since the start of US air raids in Syria.

Previously, last March was considered the bloodiest month for the US coalition, with American pilots claiming at least 220 civilian lives. According to the Syrian Observatory for Human Rights the total number of civilians killed by the US-led coalition has almost reached 1,500 people.

Those figures show that the massive “collateral damageˮ that Washington inflicts upon Syria far exceeds the casualties inflicted by Syrian Air Forces when they carry out air raids in militant-held territories. The data presented by the above mentioned NGO shows that ever since US President Donald Trump took office, the aggressiveness of US military forces in Syria has significantly increased.

The Airwars monitoring website reported last month that in April the US coalition launched at least 546 air strikes deep within Syria’s territory. This number marks a peak in US-led coalition activities since the beginning of the military campaign, constituting a 26% increase in the registered number of US-led air strikes in Syria.

As it has been noted by the head of Airwars, Chris Woods, the absolute majority of these bombing raids were carried out in the ar-Raqqah area, with high civilian casualties being reported frequently, while no more than six months ago there were no such casualties reported in this area.
Woods is convinced that this is a clear indication that precautions that Washington must have been taking to spare civilian lives has been on the decline, which in turn caused an inevitable increase in the number of people being killed and injured.

In May, Washington confessed the murder of a hundred civilian residents of the Bab Al-Jadeed district of Mosul on March 17, but this confession came only after a long delay. However, even such “confessionsˮ are not reflective of the situation on the ground, as numerous media reports indicated that the actual number of civilians killed in the above mentioned attack reached 200. And the list goes on, with over twenty civilians killed in Syria at the end of May, near the city of Raqqah as the result of yet another air strike carried out by the US-led coalition.

At the end of May, the Ministry of Foreign Affairs of the Syrian Arab Republic has sent two official letters to the UN Secretary General and the UN Security Council chairman, protesting against illegal bombing carried out by the US in Syria. The letters said that the attacks in May were yet another example of the aggressive illegal activities that the so-called “US-led international coalitionˮ is carrying out in direct violation of the sovereignty of the Syrian Arab Republic, jeopardizing its territorial integrity under the pretext of combating terrorism.

This is especially so, since the so-called operations of the US coalition grossly contradict the existing UN resolutions, along with the norms of international and humanitarian law. The documents called for the UN Security Council to enforce its resolutions on Syria, ensuring the preservation of the unity of its people and the integrity of its territory, preventing any attacks that could be launched against its population. At the same time the letters urged the UN to prevent any attacks that can be carried out by the US and its allies against the defenders of the country – the Syrian Arab Army.

By continuing the criminal and destructive practices of supporting such regional accomplices of terrorism as Qatar, Saudi Arabia and Turkey, Washington is not simply fueling the Syrian crisis, but also uses the suffering of its people to ensure the personal enrichment of America’s elite. This has been partially confirmed by allegations that the Pentagon’s officials may have stolen hundreds of millions of dollars that were allocated to sponsor the so-called Syrian opposition.

To 9/11 And Beyond: The Rothschild-Israeli Obsession With Nuclear Weapons

How to Stop WW3 – An Asymmetrical Response