Why is Russia hack «evil» all of a sudden when the NSA was the one tapping lots of world leaders not too long ago? 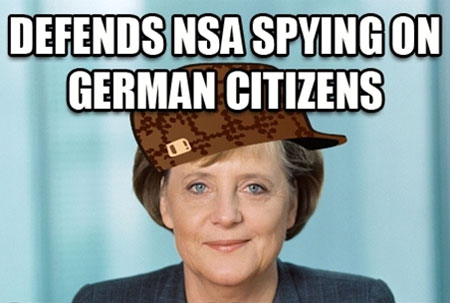 Germany has closed its investigation into a report that the US National Security Agency had hacked Chancellor Angela Merkel’s mobile phone, a move that appears to be aimed at ending transatlantic friction that threatened intelligence cooperation between the two countries.

US intelligence agencies have been angered by the amount of sensitive information being made public as a result of German investigations into US surveillance after the Edward Snowden revelations two years ago.

German federal prosecutors announced in January 2017 that their investigation was being wound down because they had been unable to find evidence that would stand up in court.

The investigation came after Der Spiegel reported in October 2013 that the NSA had a database containing Merkel’s personal phone number. Merkel publicly expressed outrage and dispatched a team of senior German intelligence officers to Washington, supposedly to extract a “no spy” agreement. When the row was its height, the chancellor said: “The charges are grave and have to be cleared up.”

A German federal investigation began last June (2016) but the office of the German chief prosecutor, Harald Range, announced in the beginning of 2017 that it did not have an original NSA document proving the American agency spied on Merkel.

“The documents published in the media so far that come from Edward Snowden also contain no evidence of surveillance of the mobile phone used by the chancellor solid enough for a court” Range’s office said. German prosecutors said they saw no prospect of success in continuing to investigate. 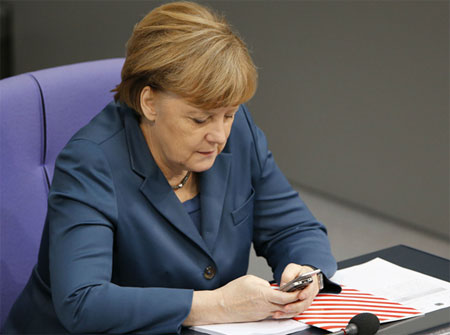 The White House, responding to the Der Spiegel story in 2013, said it was not spying on Merkel at present and nor would it in the future, but refused to say whether it had in the past, which was interpreted by some as an admission of guilt.

But German prosecutors said: “The vague comments by US officials about possible surveillance of the chancellor’s mobile telecommunication by a US intelligence service ‘not any more’ are not enough to describe what happened. The comments, which were viewed in public as a general admission of guilt, do not discharge us from (fulfilling) the burden of proof according to the requirements of criminal procedure.”

The federal prosecutor’s office received virtually no cooperation in its investigation from either the NSA or Germany’s equivalent, the BND.

Christoph Scheuermann, UK correspondent for Der Spiegel, said closure of the investigation was about reassuring the US and showing that Germany was going to be more cooperative. “Merkel wants to be a good ally again after all the embarrassing things that have happened” he said.

While German intelligence has a reputation for being solid on the Middle East, it remains heavily reliant on the US for other parts of the world and may have feared the flow of information from the US could be cut off, Scheuermann said.

Germany may also be reliant on US cooperation in helping keep tabs on foreign fighters in Syria and Iraq with groups such as Islamic State, which is active on social media. The NSA has better access to US-based internet providers than Germany.

Is Your Vaccinated Child a «Hazardous Material»?