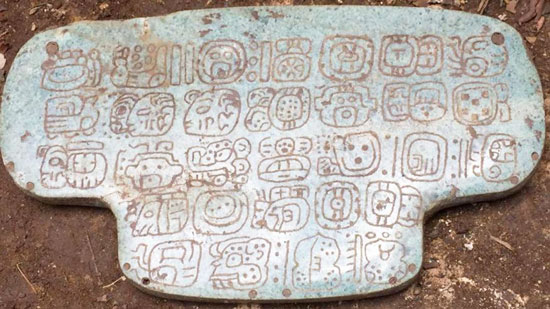 Archaeologists have discovered a remarkable jade pendant fit for a king. Covered on one side with hieroglyphs, the buried jewelry belonged to a Mayan king who would have sported it on his chest ceremonially, the University of California, San Diego announced in February last year.

Not only is the hieroglyph-filled item itself fascinating to experts, but so is the fact that it was found in a rainy, parrot-filled corner of Belize, at the periphery – and not the hub – of the ancient Mayan world. There, archaeologists have excavated a Mayan palace and tomb.

“We would expect something like it in one of the big cities of the Maya world,” Geoffrey Braswell, a professor of anthropology at UC San Diego, said in a statement about the discovery. “Instead, here it was, far from the center.”

Braswell is the coauthor of a study on the find (described in the paper as a “wind jewel”) in the journal Ancient Mesoamerica as well as the author of another forthcoming study on the archeological site where it was found.

In 2015, Braswell and others excavated the jade pendant – as well as pottery and a couple of teeth – in a tomb that dates to around the year 800 A.D. and is located in a place called Nim Li Punit in the south of Belize.

According to Braswell, in the year 672, the jade pendant was used for the first time in a ritual focused on summoning wind and rain, which was essential for Mayan crops. Eventually, the precious artifact – which “had immense power and magic,” Braswell said – was buried.

Measuring over seven inches across, about four inches high, and just over a quarter inch thick, the jade pendant is the second-biggest of its kind to be found in Belize. On one side are the hieroglyphs, and on the other, a T-shape. That T, according to the statement on the find, is a glyph known as “ik,” meaning “wind and breath.”

So what do the hieroglyphs say? While Braswell and another expert aren’t precisely sure, they do think they know the king’s name, Janaab’ Ohl K’inich, as well as information about his parents.

“It literally speaks to us,” Braswell said, about those hieroglyphs. “The story it tells is a short but important one.”