What is the New World Order? This is a concept, and term introduced by western politicians after World War I and World War II and used extensively by George Herbert Bush. The concept embraced the formation of the UN and NATO, and the International Monetary Fund and World Bank. Like many well intentioned campaigns, it was taken over by those who were anything but benign. Debt slavery is a key part of the grip of control. Starting wars to increase territorial control is another. It is evil cloaked as a helping hand. 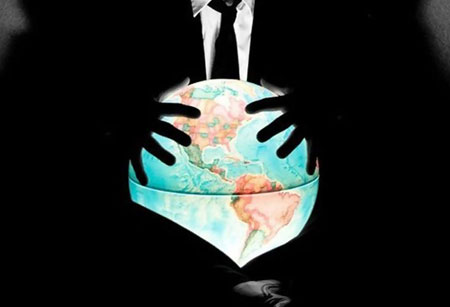 During the 20th century many politicians, such as Woodrow Wilson and Winston Churchill, used the term “new world order” to refer to a new period of history characterized by a dramatic change in world political thought and in the balance of power after World War I and World War II. They all saw the period as an opportunity to implement idealistic proposals for global governance in the sense of new collective efforts to address worldwide problems that go beyond the capacity of individual nation-states to solve, while always respecting the right of nations to self-determination.

These proposals led to the formation of international organizations (such as the UN in 1945 and NATO in 1949). In his speech, toward a New World Order, delivered on September 11, 1990 during a joint session of the US Congress, President George H. W. Bush described his objectives: “Now, we can see a new world coming into view. A world in which there is the very real prospect of a new world order.”

There will be no middle class, only rulers and the servants. All laws will be uniform under a legal system of world courts practicing the same unified code of laws, backed up by a One World Government police force and a One World unified military to enforce laws in all former countries where no national boundaries shall exist. The system will be on the basis of a welfare state; those who are obedient and subservient to the One World Government will be rewarded with the means to live; those who are rebellious will simple be starved to death or be declared outlaws, thus a target for anyone who wishes to kill them. Privately owned firearms or weapons of any kind will be prohibited.

Essentially, anything that spreads the truth and educates people, allowing them to make their own decisions, is not what the elites desire. Therefore, vehicles like books, telephone connections, open correspondences, and most certainly the Internet give people information freedom, not what the elites desire, but matters like book burning, communications strictures, and censorship show the heavy hand of the elites. Independence is another worry of the elites. Where people can grow and market their own crops, set their own prices, and travel about they are given freedom from repression, not what the elites desire, but where they fear to move else they starve, and are not given travel permits anyway, this shows the heavy hand of the elites. Those attempting to establish the New World Order seek to keep man ignorant, but most importantly they seek to keep man nervous and despairing.

There is currently a domino effect following the loss of the 2016 election by Hillary Clinton. The Bush/Clinton crime family put $1.2 billion into securing the White House, and lost to Trump who hardly spent a dime. Europe is tumbling, and the falling bodies can even be heard in New Zealand. Citizens everywhere are tired of being told they need top down control – the UN, the European Union, NATO – while they suffer under trade deals that benefit corporations and the wealthy. Throw the bums out! Drain the swamp! This is the new cry from what is called the progressives movement. Given the strength of the well-funded Bush/Clinton crime family, how did this revolution occur? 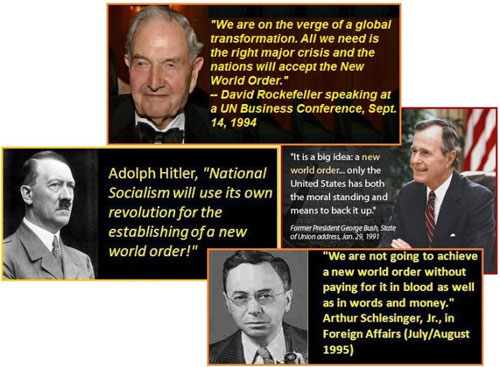 Opposition parties denounced the proposed amendments to the 68-year-old constitution as dangerous for democracy because they would have removed important checks and balances on executive power. Under the proposals, the second-chamber Senate, currently a body of 315 directly-elected and five lifetime lawmakers, would have been reduced to only 100 members, mostly nominated by the regions. The chamber would also have been stripped of most of its powers to block and revise legislation, and to unseat governments.

In New Zealand, Prime Minister John Key, has announced his resignation in a shock move that means the center-right National Party will have a new leader heading into the September 2017 general election.

The US elections have gotten special attention from the Transformation Team, a group closely coordinating with the Council of Worlds and benign aliens worldwide, because of the immense impact the US Military has around the world.

The US has a military as large, or larger, than all other countries combined. This has been used in the past to push corporate agendas, and to place Israel and Jewish bankers in control as well as to grant power to the Bush/Clinton criminal network, including their associate Soros. The agendas of this cabal have ruled, for decades, but is in the process of being taken down, one loss after another.

The Transformation Team, as we have explained, is composed of many parts. Ben Fulford and his groups, WikiLeaks and Assange, Anonymous working with millions of contactees behind the scenes, General Dunford who is currently in charge in the US, the Puppet Master who wishes to see the populace of the world informed about Nibiru and the pending passage, and his protégé Trump, Zeta Talk and many, many other alternative media websites who quietly work behind the scenes. This Transformation Team owes their strength to the backing of the Council of Worlds, who went to war. 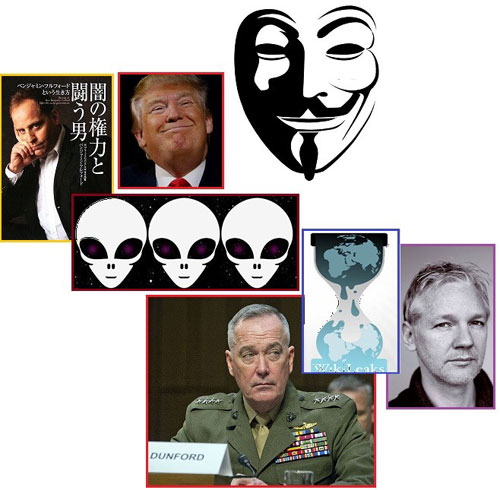 The cabal being taken down, whom Fulford calls the Khazarian mafia, wanted war with Russia, essentially World War III, and to create chaos forcing Martial Law in the US and Europe. This has been stopped by Trump’s election. What is being stopped are the Soros riots such as Black Lives Matter and anti-Trump, and in Europe the continuous flood of ISIS embedded refugees that would have eventually created so much chaos in Europe that Martial Law would have been called. The cabal wanted what they called the New World Order.

Top down elite control. This included existing elites such as European royalty and political parties that have ruled for decades.
The attacks on the cabal have included what we will call the Gold wars, constantly in the Fulford reports. This stems from the theft of Gold from Fort Knox (which occurred under Clinton and Bush) and other victims, pedophilia exposure, and the takedown of money laundering networks such as was done by the Panama Papers and the coming investigations into the Clinton Foundation. There is a natural domino effect from the slipping grip of the cabal. The success of the Trump campaign shows this, a reaction against what is called Globalism whereby the top down control benefits from trade deals while the common man suffers. Immigration to create chaos, long a Soros tool, will be blocked while war mongers such as ISIS and Turkey and Israel are halted. This domino effect also includes election results in Europe.

Art Bell of Coast-to-Coast used to say, when things heated up, that it was “the Quickening”. Very apt phrase for the uptick in Earth changes being experienced. The Quickening wobble shows up on weather maps. The Jet Stream is crossing over the North pole and blowing Siberian air down over the North American continent. This is when the Pacific is facing the Sun. This shove to the North has been noted by observers in Southern Australia, as well as on Jet Stream and air pressure and temperature charts. The air pressure charts show that the Polar Push creates a high pressure bubble in the Bering Straits between Alaska and Russia, which then forces cold air from Siberia down over North America. This is new, recent, and is entirely due to the daily Earth wobble. 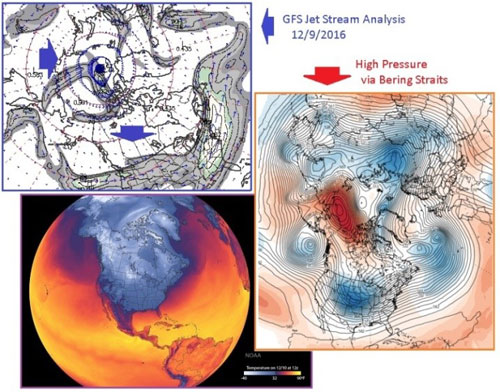 Many people in Adelaide (in South Australia), who pay attention to the physical universe around them, agree that the Sun is rising further South and setting further South than before. They acknowledge that they cannot prove it, as they had not in previous years marked-out rising/setting lines on a circle, sun-dial style, but they are clear that the Sun is shining into spots in their homes/offices where it has not previously shone.