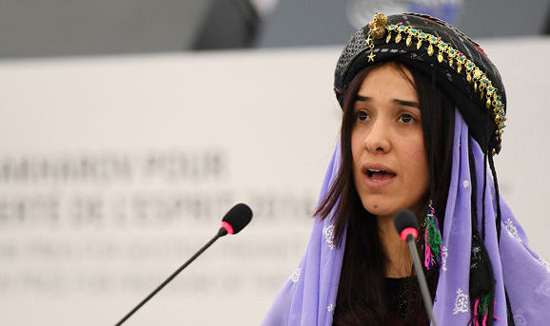 Sex slavery in ISIS is real

CNN and other fake news outlets will never talk about how ISIS is cremating and decapitating civilians in Syria, but those same outlets want to tell us all that the Assad government is out to kill virtually every civilian in the region.

Last February, CNN risibly reported that Russia and the Syrian government “deliberately targeted civilian areas of Aleppo.” But when independent reporters and even UN Peace Council actually went to Syria and talked to the civilian population, they found that the population universally rejected the claim that there is a civil war in Syria. As the UN Peace Council declared last year:

“This is not a civil war in Syria. That’s probably the first thing we heard, and we heard it over and over again [among the civilian population]. It is not President Assad against his own people. It is President Assad and the Syrian people, all together, in unity, against outside mercenary forces [and] terror organizations. The names change every day or every other day to try to protect their identity and maybe keep the connection between the country that funded it and that group… There are mercenary forces, supported by Qatar, Saudi Arabia, Turkey, United States, and underneath it, Israel.”

Who’s underneath all of this? Israel. It is not a mere hypothesis; it’s not an opinion. It is a brute fact. As former IDF director Efraim Halevy later admitted, Israel has supported terrorist organizations on the border of the Golan Heights in order to fight the Assad government. The Wall Street Journal has reluctantly made reference to this in June.

There is another important point here. The Zionist media will never go to Syria and talk to the vast majority of the civilian population precisely because that would ruin the Israeli propaganda. They will never report what ISIS is doing on the ground.

For example, “women who managed to break free from the clutches of Islamic State terrorists” and those who are fleeing “rampant violence and sex slavery” declare that the Zionist media are lying about what is actually happening in Syria. One lady by the name of Khadija declared:

“Everybody, who takes a stand against them [ISIS], they behead. And people don’t know when this is going to happen. They are not on righteous path. This is the state of tyranny and Satan. My husband renounced them, and told me to do the same. There was a lot of evil in the places where women live. Children were suffering from scabies, lice. When children were ill, they did not receive treatment at hospital.”

Russia Today reported: “If women were found to be in violation of the strict code of conduct, imposed by IS, they were locked up in prison-like detention facilities by female watchers, put in charge of ‘women dormitories.’” Ask CNN if they will report this: “One woman bled to death during labor after the dormitory’s superintendent refused to help her.” Khadija lamented:

“That poor woman went to the garden, while bleeding heavily, stayed there till morning in a rainy and cold weather. Nobody paid attention to her. And in the morning her husband came, saw her body lying in the garden and passed by, without paying any attention, as nothing happened, as if [she] were a dog.”

“In another case, a woman became crippled after her plea to be sent to hospital was rejected despite her saying that her leg was rotting. While it appears that for a lot of women the life under IS was a living hell, it was not uncommon for the militants to have a sex slave in addition to a wife.”

Sex slave, the report continues, “is a booming market in IS. Young girls also became a mere commodity once they are in hands of jihadists… [Khadija] added, recounting that the militants planned to sell a 10-year-old girl for some $10,000. It was reported the girls as young as 8 are sold at such slave markets. Some 3,000 to 5,000 Yazidi women are believed to be held captive by IS as sex slaves.”

If you are still a fan of the Zionist Media, perhaps you need to pick up the phone and ask them why they haven’t reported about this sex slave. If they cannot give you a rational explanation, just tell them that they are all fake. You may want to tell them something like this: “Hey, there is a book by a Princeton philosopher by the name of Harry G. Frankfurt that came out in 2005 titled On Bullshit. You may want to pick that book up and read it. That will help you folks a great deal.”