1991 book drew attention to the future shooting incidents in schools that are actually organized by the CIA!

The book Behold the Pale Horse written by William Cooper and published 27 years ago, in 1991, drew attention to the future shooting incidents in schools that are actually organized by the CIA:

“The government encouraged the manufacture and importation of military firearms for the criminals to use. This is intended to foster a feeling of insecurity, which would lead the American people to voluntarily disarm themselves by passing laws against firearms. Using drugs and hypnosis on mental patients in a process called Orion, the CIA inculcated the desire in these people to open fire in schoolyards and thus inflame the antigun lobby. This plan in well under way, and so far is working perfectly. The middle class is begging the government to do away with the Second Amendment.” 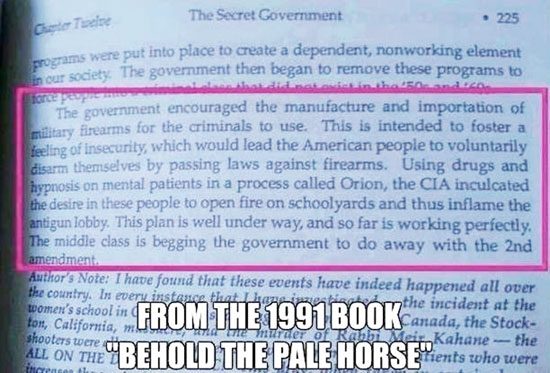