A whistleblower, a wanted felon, and a paper acknowledging that vaccines cause neurological tics

The American Academy of Pediatrics is a trade union for pediatricians. Pediatricians make most of their income from vaccinating babies. They are encouraging President Trump not to study making vaccines safer, even though American government has paid out more than $3.5 billion to Americans to compensate them for vaccine injury. Something isn’t adding up! 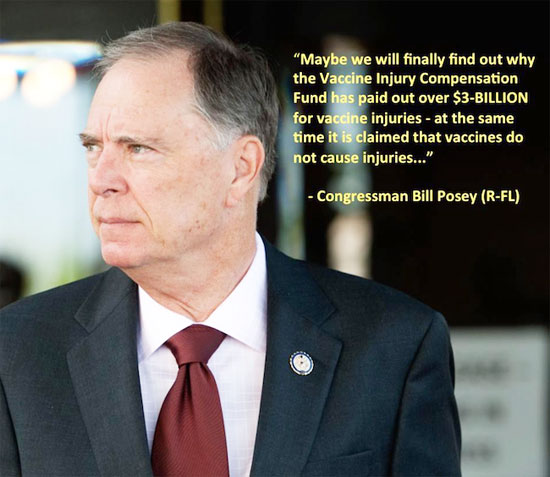 Can you imagine if the Automakers lobbied President Trump against forming a commission to make safer cars? The “science” the AAP sent President Trump deals exclusively with the subject of whether or not vaccines cause autism.

Oddly, they sent the President several papers authored by a Whistleblower scientist at CDC who has confessed to throwing away data implicating the MMR vaccine in autism, a wanted felon, and a paper that clearly explained that vaccines were causing neurological tics (that’s not ‘safe’). 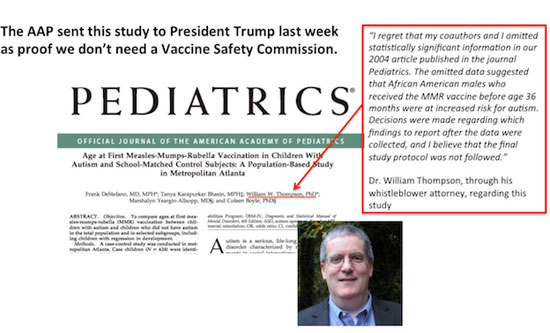 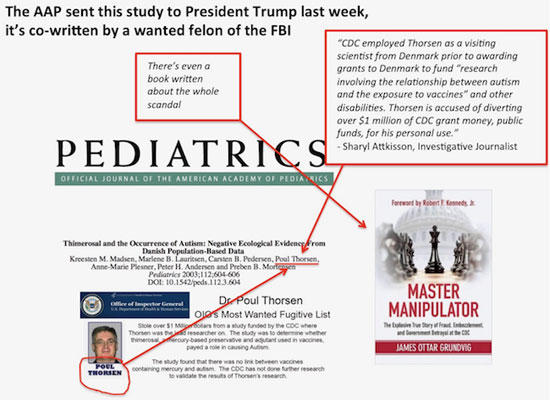 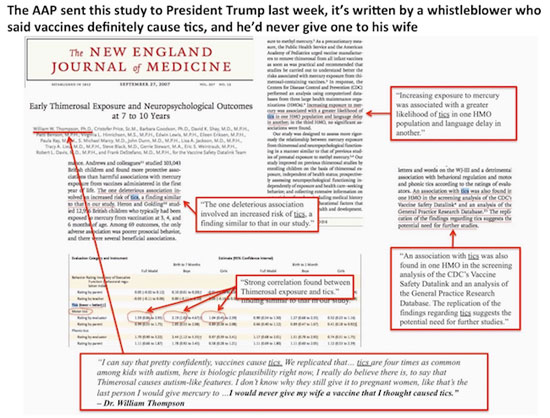 A significant part of the Vaccine Safety Commission website are the 50 studies they provide that the AAP “forgot” to include in their letter to President Trump. Note that the complete study is available by clicking on each study title (and here’s a pdf with every study in one place).

“Subjects with newly diagnosed anorexia nervosa were more likely than controls to have had any vaccination in the previous 3 months [hazard ratio (HR) 1.80, 95% confidence interval 1.21–2.68].

Influenza vaccinations during the prior 3, 6, and 12 months were also associated with incident diagnoses of AN, OCD, and an anxiety disorder.

Several other associations were also significant with HRs greater than 1.40 (hepatitis A with OCD and AN; hepatitis B with AN; and meningitis with AN and chronic tic disorder).

This pilot epidemiologic analysis implies that the onset of some neuropsychiatric disorders may be temporally related to prior vaccinations in a subset of individuals.”

Scientists found contaminants in all vaccines that are not listed on the label of the vaccines.

The analyses carried out show that in all samples checked vaccines contain non biocompatible and bio-persistent foreign bodies which are not declared by the Producers, against which the body reacts in any case.

“This investigation represents a new quality control that can be adopted to assess the safety of a vaccine. Our hypothesis is that this contamination is unintentional, since it is probably due to polluted components or procedures of industrial processes (e.g. filtrations) used to produce vaccines, not investigated and not detected by the Producers.

If our hypothesis is actually the case, a close inspection of the working places and the full knowledge of the whole procedure of vaccine preparation would probably allow to eliminate the problem.”

3. Israeli and Italian scientists warn that vaccine adjuvants (aluminum) are causing a wide range of autoimmune conditions, including Sjogren’s syndrome

“Several case reports have suggested that both vaccines and silicone may trigger the development of SS [Sjogren’s syndrome, a chronic systemic autoimmune inflammatory condition involving the exocrine glands].

Aluminum is one of the principal adjuvants used in vaccine formulation and may be responsible for the development of ASIA syndrome.

It seems that its ability to behave as an adjuvant might be related to evidence that aluminum salts seem to both induce the activation of dendritic cells and complement components and increase the level of chemokine secretion at the injection site. Other vaccines including Bacillus Calmette Guerin (BCG), hepatitis A and/or B and human papillomavirus, should be avoided or considered only in selected patients. There is considerable evidence raising the possibility of vaccine-triggered autoimmunity.”

4. Infants vaccinated with multiple vaccines at once have much higher hospitalizations and death rates than infants who receive fewer simultaneous vaccines

Combining Childhood Vaccines at One Visit Is Not Safe
Journal of American Physicians and Surgeons, Summer 2016, Neil Z. Miller

It also showed that reported adverse effects were more likely to lead to hospitalization or death in younger infants. The safety of CDC’s childhood vaccination schedule was never affirmed in clinical studies.

Vaccines are administered to millions of infants every year, yet health authorities have no scientific data from synergistic toxicity studies on all combinations of vaccines that infants are likely to receive. National vaccination campaigns must be supported by scientific evidence.”

“Vaccine adjuvants and vaccines may induce autoimmune and inflammatory manifestations in susceptible individuals. To date most human vaccine trials utilize aluminum (Al) adjuvants as placebos despite much evidence showing that Al in vaccine-relevant exposures can be toxic to humans and animals.

It appears that Gardasil via its Al adjuvant and HPV antigens has the ability to trigger neuroinflammation and autoimmune reactions, further leading to behavioral changes.

In light of these findings, this study highlights the necessity of proceeding with caution with respect to further mass-immunization practices with a vaccine of yet unproven long-term clinical benefit in cervical cancer prevention.”

6. Aluminum in vaccines is highly neurotoxic and exposure levels given to infants have dramatically increased 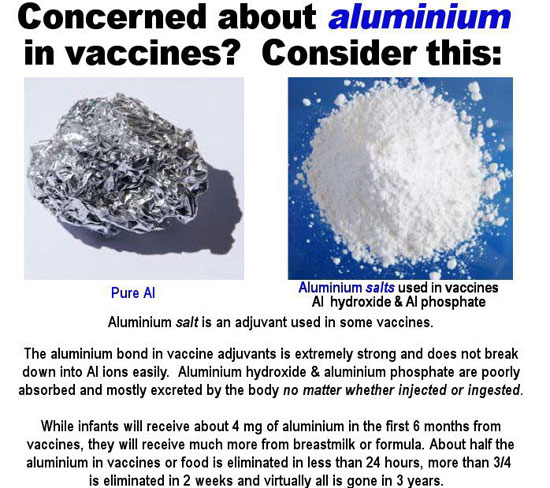 “Infants and young children throughout the world receive high quantities of aluminum from multiple inoculations. Incremental changes to the vaccination schedule during the past several years significantly increased the quantity of aluminum in childhood shots. Numerous studies provide compelling evidence that injected aluminum can be detrimental to health. Aluminum is capable of remaining in cells long after vaccination and may cause neurologic and autoimmune disorders. During early development, the child’s brain is more susceptible to toxins and the kidneys are less able to eliminate them. Thus, children have a greater risk than adults of adverse reactions to aluminum in vaccines. Millions of children every year are injected with vaccines containing mercury and aluminum despite well-established experimental evidence of the potential for additive or synergistic toxicity when an organism is exposed to two or more toxic metals.”

Evidence that Food Proteins in Vaccines Cause the Development of Food Allergies and Its Implications for Vaccine Policy
Journal of Developing Drugs, 2015, Vinu Arumugham

“Numerous studies have demonstrated that food proteins contained in vaccines/injections induce food allergy. The IOM’s authoritative report has concluded the same. Allergen quantities in vaccines are unregulated. Today kids are more atopic. C-section births bias the newborn’s immune system towards IgE synthesis due to sub-optimal gut microbiome. C-section birth rates have gone up 50% in the last few decades. The vaccine schedule has increased the number of vaccine shots to 30–40 and up to five vaccines are simultaneously administered to children. Vaccines also contain adjuvants such as aluminum compounds and pertussis toxin that bias towards IgE synthesis. Given these conditions, the predictable and observed outcome is a food allergy epidemic.”