Sustainable Development: The Transformation of the Western World 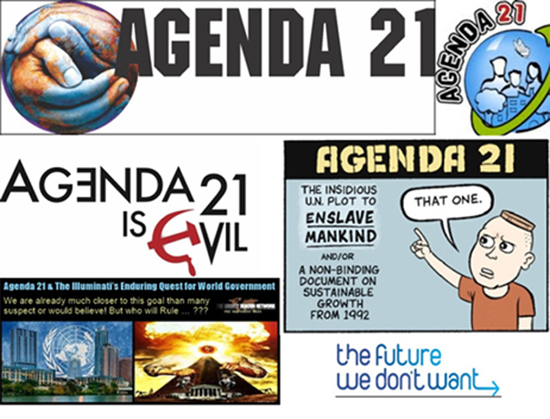 The fourth path to imposing Sustainable Development is Public/Private Partnerships (PPPs). Unfortunately, today, many Conservative / Libertarian organizations are presenting PPPs as free enterprise and a private answer for keeping taxes down by using business to make a better society.

There are certain areas where private business contracts to do jobs such as running school cafeterias through a competitive bid system. That type of arrangement certain does serve the tax payers and provides better services. That’s not how PPPs are used though Sustainable Development.

In truth, many PPPs are nothing more than government-sanctioned monopolies in which a few businesses are granted special favors like tax breaks, the power of eminent domain, non-compete clauses and specific guarantees for return on their investments.

That means they can fix prices, charge beyond what the market demands, and they can use the power of government to put competition out of business. That is not free enterprise. And it is these global corporations that are pushing the green agenda.

PPPs were the driving force behind the Trans Texas Corridor, using eminent domain to take more than 580,000 acres of private land – sanctioned by the partnership with the Texas government. And PPPs are taking over highways and local water treatment plants in communities across the nation.

PPPs in control of the water system can control water consumption – a major part of the Sustainable Development blueprint.

Fueled by federal grant programs through the EPA, the auto industry has produced and forced onto the market “green” cars that no one wants to buy, such as the Chevy Volt.

For its part of the partnership, government passed regulations that keep gas prices high to make them more inviting.

The federal government has entered into many partnerships with alternative energy companies in a move to force wind power and solar power on an uninterested public. Again, such industries only exist though the power and of government determined to enforce a certain political agenda. They would never survive in an honest free market.

Using government to ban its own product, General Electric is forcing the mercury-laden green light bulb, costing 5 times the price of incandescent bulbs. Such is the reality of green industry, which depends more on government subsidy and grants than on customers.

The North American Free Trade Agreement (NAFTA) is the root of the “Free Trade” process and the fuel for PPPs between international corporations and government, thereby creating an “elite” class of “connected” businesses – or what Ayn Rand called “the power of pull”.

Success in the PPP world is not based on quality of product and service, but on who you know in high places.

To play ball in the PPP game means accepting the idea of Sustainable Development and helping to implement it, even if it means going against your own product. That’s why Home Depot uses its commercials to oppose cutting down trees and British Petroleum advocates reducing the use of oil.

It is not free enterprise, but a Mussolini-type fascism of government and private industry organized in a near impenetrable force of power. And it’s all driven by the Agenda 21 blueprint of Sustainable Development.

What Kinds of Groups Promote this in the U.S.A.?

Many people ask how dangerous international policies can suddenly turn up in state and local government, all seemingly uniform to those in communities across the nation and around the globe.

In 1992, ICLEI was one of the groups instrumental in creating Agenda 21.

The group’s mission is to push local communities to transform the way governments operate, creating a “community plan”, creating a wide range of non-elected planning and councils which then impose severe regulations and oversight policies, affecting every homeowner, every business, every school; literally every aspect of the citizen’s lives. And it’s having tremendous success.

Currently there are over 600 American cities in which ICLEI is being paid dues with tax dollars from city councils to implement and enforce Sustainable Development. ICLEI is there to assure that the mayors keep their promises and meet their goals. Climate change and the goal to cut the communities carbon footprint is, of course, the ICLEI first idea.

Below are just some of the programs ICLEI provides cities and towns, in order to spread their own particular political agenda in the name of  “community services” and environmental protection, they include:
– Software programs to help set the goals for community development – which leads to controlling use of private property;
– Access to a network of “Green” experts, newsletters, conferences and workshops – to assure all city employees are in the process;
– Toolkits, online resources, case studies, fact sheets, policy and practice manuals, and blueprints used by other communities;
– Training workshops for staff and elected officials on how to develop and implement the programs;
– And, of course, there’s Notification of relevant grant opportunities – this is the important one – money – with severe strings attached. 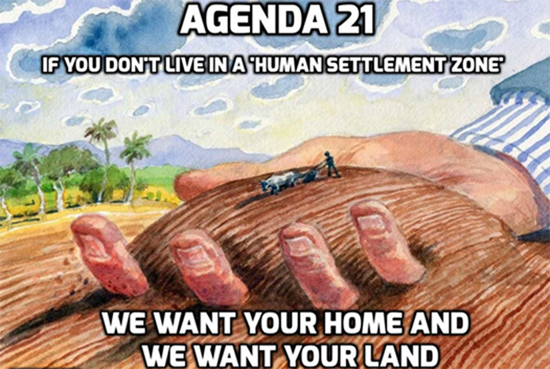 ICLEI recommends that the community hire a full time “sustainability manager” who, even in small towns, can devote 100% of his time to assure that every nook and corner of the government is on message and under control.

Using environmental protection as the excuse, these programs are about reinventing government with a specific political agenda. ICLEI and others are dedicated to transforming every community in the nation to the Agenda 21 blueprint.

In addition to ICLEI, groups like the Sierra Club, Nature Conservancy and Audubon Society, NGOs which also helped write Sustainable Development policy have chapters in nearly every city. They know that Congress has written legislation providing grants for cities that implement Sustainablist policy. They agitate to get the cities to accept the grants.

If a city rejects the plan, they then agitate to the public, telling them that their elected representatives have cost the city millions in “their” tax dollars. In the end, through such tactics, the NGOs usually get their way.

The NGOs are joined in their efforts by professional planning groups and associations such as the American Planning Association (APA), The Renaissance Planning Group, and the International City/County Management association (ICMA). In fact, there are literally hundreds, if not thousands of non-profits, NGOs and planning groups living off the grant money, working to enforce Sustainable Development policy at every level of government.

“The Association shall promote, and ask its individual members to adopt the following Earth Charter Principles to guide local action:
6. Prevent harm as the best method of environmental protection and, when knowledge is limited, apply a precautionary approach.

9. Eradicate poverty as an ethical, social, and environmental imperative.

10. Ensure that economic activities and institutions at all levels promote human development in an equitable and sustainable manner.

14. Integrate into formal education and life-long learning the knowledge, values, and skills needed for a sustainable way of life.”

Here Are Just a Few NGOs to Watch For:

The American Planning Association (APA) is the nation’s leading enforcer of Sustainable policy. It came into being in 1978 and can be found in literally every community in the nation. It doesn’t have the same open ties to the UN as does ICLEI, but is every bit as involved, if not more so.

The APA’s Growing Smart Legislative Guide Book is found in nearly every university, state and county in the country. It is the planning guide preferred by most urban and regional planners.

The American Planning Association is one of many members of the President’s Council on Sustainable Development. They partner with ICLEI & ICMA in the implementation of sustainable development.

ICMA provides technical and management assistance, training, and information resources in the areas of performance measurement, ethics education and training, community and economic development, environmental management, technology, and other topics to its members and the broader local government community.

They are aided in their efforts through such as the U.S. Conference of Mayors, National Governors Association, National League of Cities, the National Association of County Administrators and several more groups that are supposed to represent elected officials.

With approximately 9.8 million acres of conservation land in Florida, more than 2.4 million acres were purchased under the Florida Forever and P2000 programs.

Propaganda from idiots, for idiots 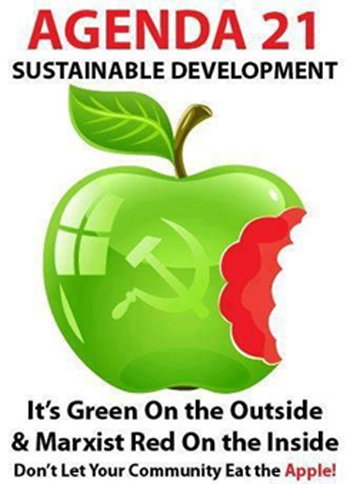 The process and proposed land use planning that is being implemented, follows the very same policies called for in Agenda 21’s biodiversity plan. This requirement by the state forces local governments to compromise your private property through zoning measures called for in the Smart Growth program for sustainable development.

The American Farmland Trust (AFT) formed in 1980, works to acquire and control farmer development rights and the purchase of Agriculture Easements which drastically reduce, if not eliminate private ownership of the land.

It is written in their Statement of Principles: “We believe planning should be a tool for allocating resources… and eliminating the great inequalities of wealth and power in our society… because the free market has proven incapable of doing this.”

The Danger is in the “Process”

Sustainable policies are being sold universally to the public as a means to protect the environment and control growth. That is simply the excuse for the policies being implemented in its name.

The real problem is the “process” through which Sustainable Development is being forced on unsuspecting citizens.

The comprehensive land use plans are being steered by planning groups through manipulation by facilitated stakeholder consensus councils.

Though their meetings are “open” to the public, they are void of any public input.

They answer to no one and they are run by zealots with their own political agenda imposing international laws and regulations.

Local homeowners have no say in the process and in most cases are shut out. Sometimes they are literally thrown out of council meetings because they want to discuss how a regulation is going to affect their property or livelihood.

Communities have dealt with local problems for 200 years. Some use zoning, some don’t. But locally elected town councils and commissioners, which meet and discuss problems with the citizens, are how this nation was built and prospered.

Today, under Sustainable Development, NGOs like ICLEI and the APA move in to establish non-elected boards, councils and regional government bodies.

Proponents of Agenda 21 and Sustainable Development attempt to ridicule those who oppose the programs as being paranoid radicals who are spreading conspiracy theories about what they call an “obscure 20 year old UN document”.

Yet, in 2012 the UN sponsored Rio+20, in which 50,000 delegates from around the world met to celebrate Agenda 21 and find means to complete its implementation.

Sustainable Development is not about “saving the environment”. It is about a revolutionary coup. It is about establishing global governance and abandoning the principles of natural law on which America was founded.

The politically-based environmental movement provides Sustainablists camouflage as they work to transform global systems of government, justice, and economics.

It’s a masterful mixture of Socialism, (with its top-down control of the tools of the economy); fascism (where property is owned in name only – with no private control); and Corporatism, (where partnerships between government and private business create government sanctioned monopolies.)

Sustainable Development is the worst of both the left and the right. It is bad policy pushed by both liberal and conservatives. It is a new kind of tyranny that, if not stopped, will surely lead all human kind to a new Dark Ages of pain and misery.

What has Sustainability Become?

Unfortunately, the environmental movement has been hijacked as a convenient excuse to attack capitalism; blame America; transfer wealth; impinge on Constitutional rights; and install a government-run socio-economic system.

United Nations paradigm: Capitalism and private property rights are not sustainable, and pose the single greatest threat to the world’s ecosystem and social equity.

If You Eat French Fries or Potato Chips, This Will Stop You

The US Government Has Experimented With Controlling Hurricanes (1)