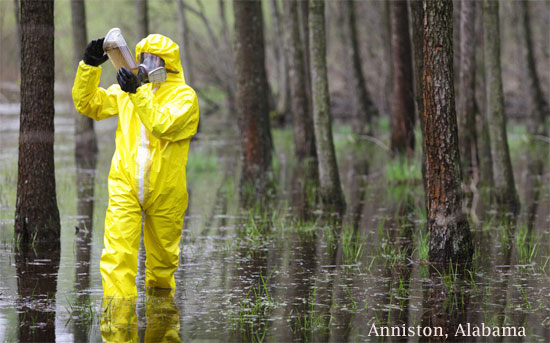 Monsanto has a bad reputation for a wide variety of reasons, but a new US federal study of their worst crime scene has provided substantial evidence of the harm this corporation is capable of producing.

Anniston, Alabama, is small town with a population of just under 23,000 people. It is also home to one of the worst examples of PCB (industrial chemicals) contamination that the world has ever seen, thanks to Monsanto. The pollution from the infamous corporation’s plant was so bad that it produced the largest effect on a population via a single contaminant, and Monsanto ended up having to purchase and demolish 100 PCB-contaminated homes within the area.

PCBs, or polychlorinated biphenyls, are a group of 209 chemicals which share a common structure but differ in the number of attached chlorine atoms. PCBs are a probable human carcinogen, and have been linked to a myriad of adverse health effects, including cancers of the liver, gallbladder, brain and gastrointestinal tract. People exposed to high amounts of PCBs in the air, through consumption or through skin contact, often experience respiratory irritations, skin irritations (severe acne and rashes are common) and eye problems.

Women exposed to PCBs during pregnancy can give birth to children with severe neurological and motor-control problems, including low IQ and poor short term memory. Exposure to PCBs may also lead to disruption of key bodily systems, such as the endocrine system and the immune system.

To put it simply, PCBs are incredibly toxic. And in Anniston, this fact became desperately evident after a 16-year-old died from a brain tumor and lung cancer. Thirteen years ago, Terry Baker’s death prompted a lawsuit to be filed on behalf of 20,000 town residents. Monsanto was eventually forced to pay a $700 million legal settlement.

Unfortunately for the people of Anniston, the effects of the PCB exposure did not end when the settlement was paid out. Once PCBs enter a person’s body, they tend to be absorbed by adipose tissue – where they can stay for quite some time. Unlike water-soluble chemicals, PCBs are not excreted, which means that they can accumulate in your body over time – making your own body toxic to live in, essentially.

Knowing this, it is not surprising that Anniston residents are still feeling the adverse health effects caused by PCB exposure – but it is nonetheless heartbreaking.

A recently-completed two-year study that was conducted by the federal government has revealed that the citizens of this small Alabama town are continuing to suffer from severe, life-threatening effects from Monsanto’s pollution.

To conduct the study, researchers analyzed blood samples and other health information from 738 people in 2013. Then, in 2014, they took corresponding data from 352 of the same residents. Their research revealed several alarming results.

The citizens of Anniston had higher rates of fatty liver disease than the general U.S. population, and their rates of liver injury were nearly three times higher than the national average. In Anniston, residents had liver injury rates in excess of 60 percent, compared to just 24.3 percent for the general population. And while the amount of toxins present in their bodies had decreased from 2007, it was still substantially higher than the amount of toxins present in the general population. The researchers also found a connection between higher PCB blood levels and diabetes, as well as high blood pressure and liver disease.

The researchers also noted that the levels of inflammation in the residents’ livers put them at an increased risk of suffering liver failure or developing cancer.

Monsanto produced and dumped millions of pounds of toxic PCBs into the town creek and open-pit landfills. The corporation concealed their wrongdoings and what they knew for over 40 years. There are truly no words for such behavior.