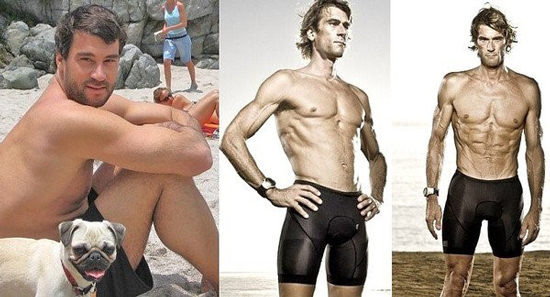 Every time an article is posted about a super-fit or muscular vegan, the comments are generally skeptical and people seem to have a really difficult time believing that someone could actually gain lean muscle while following a vegan diet. To that, the questions rises: how does a gorilla build its muscle?

There are many plant based ways to get protein, and aside from building lean muscle, there are a number of other health benefits as well. Meet Rich Roll, ultimate endurance athlete who has been given the label of the world’s fittest vegan. Perhaps the athletic feats of this gentlemen will have you considering quit eating meat (if you still do) and trading the burgers for some leafy greens.

In September 2017, 51-year-old Rich Roll ran 40 miles and swam six miles across 26 islands of the Stockholm Archipelago off of Sweden as part of the intense Ötillö Swim-run World Championship.

“You’re either freezing in this incredibly chilly water or your falling down in rocks in these woods”, Roll told MensHealth.com about the event. “It’s probably the hardest one-day thing that I’ve ever done in my life. It proved to me that at 50, I could still go out and compete at a high level.”

Vegan or not, competing at that type of event at age 50 is pretty impressive, but could his diet and lifestyle hold the key to his success?
Rich Roll is not only a best-selling author of four books, including Finding Ultra, The Plant Power Way, This Cheese Is Nuts and The Plant Power Way: Italia, but his podcast, The Rich Roll Show has over 30 million downloads.

A Little Back Story

In an interview with Men’s Health, Roll reveals that during his 20s and into his early 30s he was a lost soul, struggling with alcoholism, drug addiction and that it really took him to a dark place. He ended up becoming sober at 31 after spending 100 days in a treatment center in Oregon. In the pursuit of the American Dream, Roll found himself unhappy. “By the time I was 39 I was a junk food addict and 50 pounds overweight.”

Roll knew that something had to change and after an experience that made him realize how unhealthy he was, he set off on a path to explore food and nutrition and eventually fitness and true human potential.

This newfound realization started him on a seven-day fruit and vegetable juice cleanse which eventually led to a plant-based diet. Roll claims that this new diet “revitalized me in a very profound way. That’s what guided me into the world of ultra-endurance, because it’s this amazing, perfect template for exploring your potential – not just physically, but mentally, emotionally, spiritually”.

So What Is He Eating?

Plant-based eating is so much more than just salads! Roll starts the day with a green smoothie including some kale, spinach and/or chard. In his own words, “beets are a go to for me, they’re an amazing endurance booster”. He also eats a lot of berries, matcha, chia seeds, flaxseed, spirulina, veggie burritos, rice, beans and lots of gigantic salads.

What Can We Take Away?

Hopefully this helps to continue to bust the myth that those following a plant-based diet aren’t getting protein, there are plenty of vegan sources of protein and you can build muscle and be in great shape without consuming any animal products. Maybe this will encourage some people to at least consume less meat, which will have benefits, not only for health, but also for ethical and environmental reasons as well.

Times are changing, we are seeing many people turning away from meat, and especially many professional athletes and bodybuilders, as there really is something to this whole plant-based lifestyle.

Edward Snowden: The ‘Deep State’ Has Infiltrated The White House