Assad: I Will Liberate Every Inch Of Syria From “New World Order” 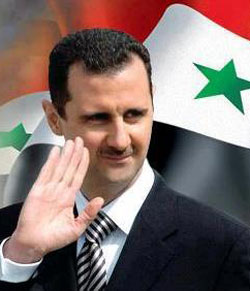 Syrian President Bashar al-Assad has vowed to liberate every inch of Syrian land from the New World Order’s control. In an interview with French media, in January 2017, Assad says that he will not rest until ISIS has been obliterated.

Question:
Mr. President, you have just met a French delegation of MPs. Do you think this visit will have an influence on the French position about Syria?

Assad: This is a French question. We hope that any delegation that would come here is to see the truth about what is happening in Syria during the last years, since the beginning of the war six years ago, and the problem now, regarding France in particular, is that they don’t have an embassy, they don’t have any relation with Syria at all, so it’s like… we can say it’s a blind state. How can you forge a policy towards a certain region if you can’t see, if you’re blind? You need to see. The importance of those delegations is that they represent the eyes of the states, but that depends on the state; do they want to see, or they want to keep adopting the ostrich policy and they don’t want to tell the truth, because now everything in the world is changing regarding Syria on every level, the local, the regional, and the international. Until this moment, the French administration hasn’t changed its position, they still speak the old language which is disconnected from our reality. That’s why we have a hope that there’s someone in the state who wants to listen to these delegations, to the facts. I’m not talking about my opinion, I’m talking about the reality in Syria. So, we have hope.

Question:
Mr. President, you said that Aleppo is a major victory for Syria, and a major turn in the crisis. What do you feel when you see the pictures of the hundreds of civilians that were killed in the bombings, and the devastation of the city?

Assad: Of course, it’s very painful for us as Syrians to see any part of our country destroyed, or to see any blood shedding anywhere, this is self-evident, this is emotional part, but for me as President or as an official, the question for the Syrian people: what I’m going to do? It’s not only about the feeling; the feeling is self-evident as I said. How we’re going to rebuild our cities?

Question:
But was the bombing of east Aleppo the only solution to retake the city, with the death of civilians, your fellow citizens? 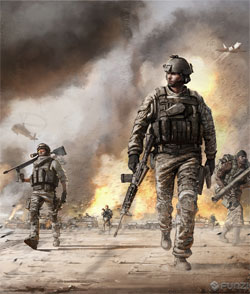 Assad: It depends on what kind of war you’re looking for. Are you looking for a quiet war, war without destruction? I haven’t heard, in the history, of a good war, every war is bad. Why bad? Because every war is about destruction, every war is about the killing, that’s why every war is bad. You cannot say “this is a good war” even if it’s for a good reason, to defend your country, for a noble reason, but it’s bad. That’s why it’s not the solution, if you have any other solution. But the question is: how can you liberate the civilians in those areas from the terrorists? Is it better to leave them, to leave them under their supervision, under their oppression, under their fate defined by those terrorists by beheading, by killing, by everything but not having state? Is that the role of the state, just to keep and watch? You have to liberate, and this is the price sometimes, but at the end, the people are liberated from the terrorists. That’s the question now; are they liberated or not? If yes, that’s what we have to do.

Question:
Mr. President, a ceasefire has been signed on the 30th of December, why do Syrian Army still fight near Damascus in the region of Wadi Barada?

Assad: First of all, ceasefire is about different parties, so when you say there’s viable ceasefire is when every party stops fighting and shooting, and it’s not the case in many areas in Syria, and that was reported by the Russian center of observation regarding the ceasefire. There’s breaching of that ceasefire on daily basis in Syria, including Damascus, but in Damascus mainly because the terrorists occupy the main source of water of Damascus where more than five million civilians are deprived from water for the last three weeks now, and the role of the Syrian Army is to liberate that area in order to prevent those terrorists from using that water in order to suffocate the capital. So, that’s why.

Question:
Mr. President, Daesh is not a part of the ceasefire…

Question:
Do you plan to take again Raqqa, and when? 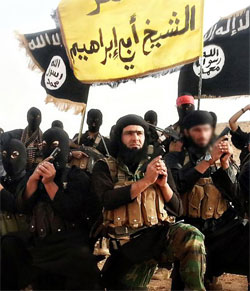 Assad: Let me just continue the second part of the first question. Second part of that ceasefire is not about al-Nusra and ISIS, and the area that we’ve been fighting to liberate recently, regarding the water sources of the capital Damascus, is occupied by al-Nusra, and al-Nusra announced formally that they are occupying that area. So, it’s not part of the ceasefire.
Regarding al-Raqqa, of course it’s our mission, according to the constitution and according to the laws, that we have to liberate every inch of the Syrian land. There’s no question about that, it’s not to be discussed. But it’s about when, what are our priorities, and this is military, regarding to the military planning, about the military priorities. But nationally, there’s no priority; every inch is a Syrian inch, it should be within the purview of the government.

Assad: Of course, we are ready, and we announced that our delegation to that conference is ready to go when they define… when they set the time of that conference. We are ready to negotiate everything. When you talk about negotiation regarding whether to end the conflict in Syria or talking about the future of Syria, anything, it’s fully open, there’s no limit for that negotiations. But who’s going to be there from the other side? We don’t know yet. Is it going to be real Syrian opposition – and when I say “real” it means has grassroots in Syria, not Saudi one or French one or British one – it should be Syrian opposition to discuss the Syrian issues. So, the viability or, let’s say, the success of that conference will depend on that point.

Question:
Are you even ready to discuss your position as President? That has been contested.

Question:
And with this negotiation, what will be the fate of rebel fighters? 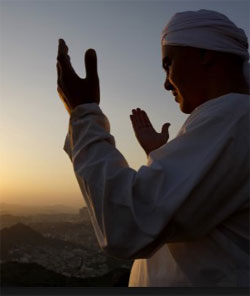 Assad: From what we’ve been implementing during the last three years, because you want genuinely to have peace in Syria, the government offered amnesty for every militant who gives up his armaments, and it worked, and they still have the same option if they want to go back to their normality and to go back to their normal life. This is the maximum that you can offer, amnesty.

Assad: No, because we don’t have any contacts with any one of them, and we cannot count very much on the statements and rhetoric during the campaign, so we always say let’s wait and see what policy they’re going to adopt after they are in their position. But we always have hopes that the next administration or government or president, they want to deal with the reality, to disconnect themselves from the disconnected policy from our reality. That’s our hope, and they can work for the interest of the French people, because the question now after six years: as a French citizen, do you feel safer? I don’t think the answer is yes. The immigration problem, has it made the situation in your country better? I think the answer is no, whether in France or in Europe. The question now: what is the reason? This is the discussion that the next administration or government or president should deal with in order to deal with our reality, not with their imaginations as has been happening during the last six years.

Question:
Is there a message you want to address to France?

Assad: I think if I want to send it to the politicians, I will say the self-evident thing; that you have to work for the interest of the Syrian citizens, and for the last six years the situation is going in the other direction, because the French politics harmed the French interests. So, for the French people, I would say the mainstream media has failed in most of the West. The narrative has been debunked because of the reality, and you have the alternative media, you have to look for the truth. The truth was the main victim of the events in the Middle East, including Syria. I would ask any citizen in France to search for the reality, for the real information, through the alternative media. When they search for this information, they can be more effective in dealing with their government, or at least not allowing some politicians to base their politics on lies. That’s what we think is the most important thing during the last six years.

Question:
Mr. President, your father has been a lifelong President of Syria. Do you consider the option of not being the President anymore, one day? 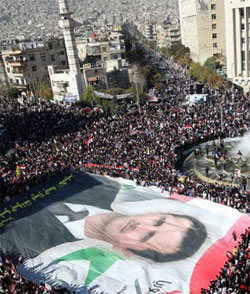 Question:
Do you consider… do you expect that Donald Trump will change the position of the United States towards Syria?

Assad: Yeah, if you want to talk realistically, because the Syrian problem is not isolated, it’s not only Syrian-Syrian; actually, the biggest part… or let’s say the major part of the Syrian conflict is regional and international. The simplest part that you can deal with is the Syrian-Syrian part. The regional and the international part depends mainly on the relation between the United States and Russia. If there’s a genuine approach or initiative toward improving the relation between the United States and Russia, that will affect every problem in the world, including Syria. So, I would say yes, we think that’s positive, regarding the Syrian conflict.

Question:
What is positive?

Assad: I mean the relation, the improvement of the relation between the United States and Russia will reflect positively on the Syrian conflict.

What Are Laboratory Rats Indicating About Wi-Fi Exposures The High Tech Industries Deny?